Their is a shortage of videos and tips, please share in this thread .

Like others I am lost, with some of the new tools

Here are a number of tips on point by point modeling I posted elsewhere. Maybe helpful for when you need to do some mesh surgery. Most of the vids focus on the flashier aspects of ZModeller like Qmesh. Box modeling is great, but sometimes you just need to be able to model on the vertex level.

I’ll list some of the basic ones I’ve documented thus far, and maybe they’ll be of assistance to newer users. I’ve also personally found things go much faster if I assign the Space keystroke to my forward pen button, to make switching between modes as quick as possible, requiring one finger and minimum screen travel. That Zmodeler context menu gets a lot of traffic. The thing to remeber about ZModeler, is that it works great in conjunction with many of the traditional zbrush functions you already know, like masking and transpose. Use all the tools at your disposal in different combinations, and there’s always more than one way to get some place. Some times you want to extrude with QMesh, sometimes you want the control of a transpose extrusion. As always, masking can be used to protect polygons from unwanted changes, which means it can be helpful to limit bevels, loop insertions, or splitting functions. Be creative!

If anyone has any other questions on ZModeler or Arrays, I’ll try to answer them. I’m about 85 % on ZModeler, and about 60% on arrays–a lot of it is still mysterious to me. Haven’t worked much with Nanomesh yet, but I understand the basics.

Thanks so much, man! The only other thing I would need to see is just someone modeling a simple object. Not something too fancy. Usually people try to show off fancy things in youtube videos set to trance/techno/electronica. I just want to see someone model a dog house with zmodeler at some point ;3 Using all the tools

Dont treat it as a polygon model. Watch ryan explain the zmodeler brush. I have been posting my take on the brush for months, I tried to tell people you will still need other polygon modeling programs… We gave to look at it as a hard surface enhancement…

Yes I use the brush and I love it, but only after I understood its limit … Ryan seem to really struggle with it.

The biggest thing that holds back ZModdeler as a polygonal modeler, other than the fact that it’s unpolished first generation tech that is missing a couple features you might be used to, is the fact that ZBrush doesn’t tolerate N-Gons. So if any operation would result in a polygon with more than 4 verts, it inserts a bunch of edges that can confuse the situation. You can train yourself to ignore these, and just focus on the component at hand, but the cleanup does make for some extra work.

That said, its entirely possible to use ZModdeler as a polygonal modeler once you learn the best way to go about things. This Laser cannon was entirely modeled in Zbrush at the wire and vertex level, as I would in a traditional modeler, which you can see by all my crazy ugly wiring all over the place to reinforce edges and curves. It’s mostly one piece (click on the lower attached image thumbnail for a larger version, I didn’t want to blow out the thread formatting): 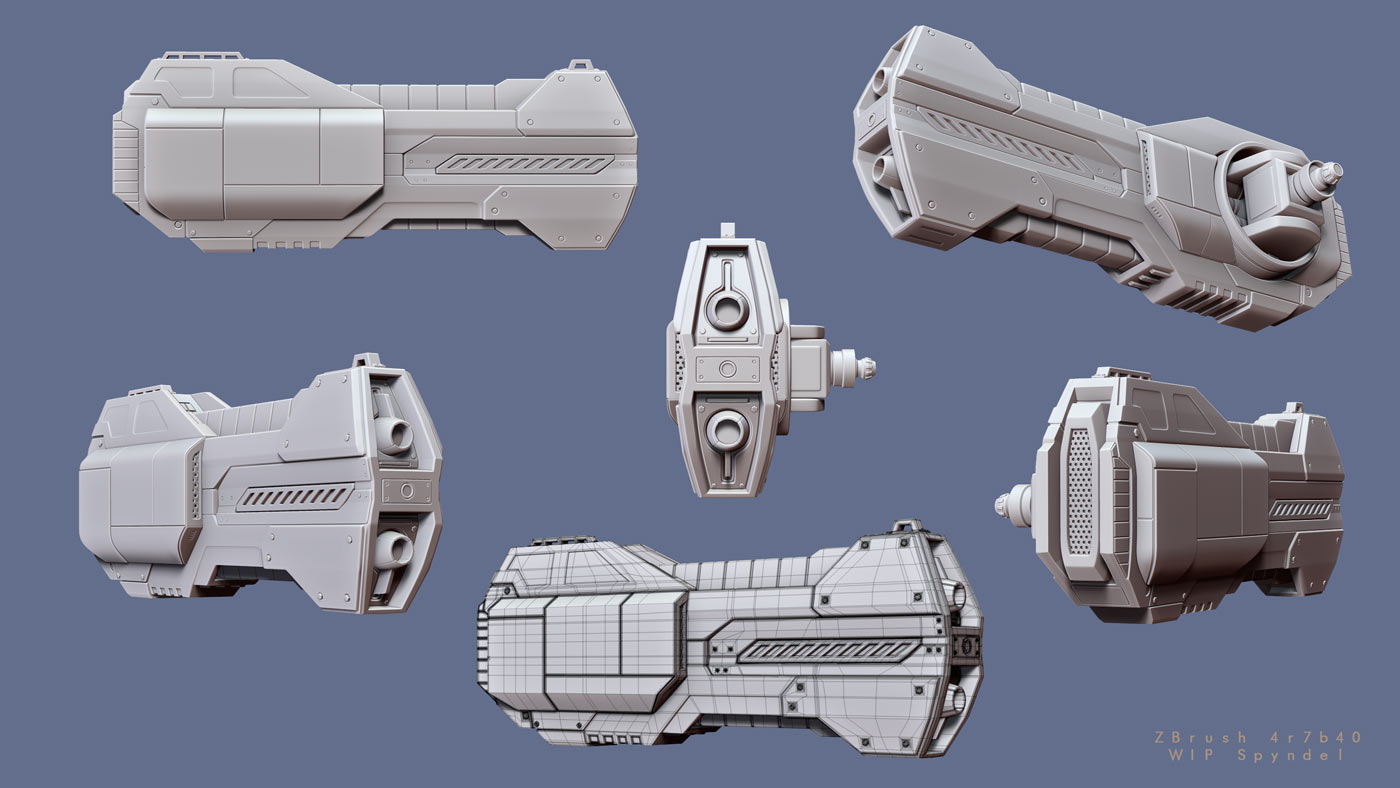 It’s a tool, like anything else. It can be learned to various degrees of proficiency. Some people might stop at at QMeshing, but you can take it farther. 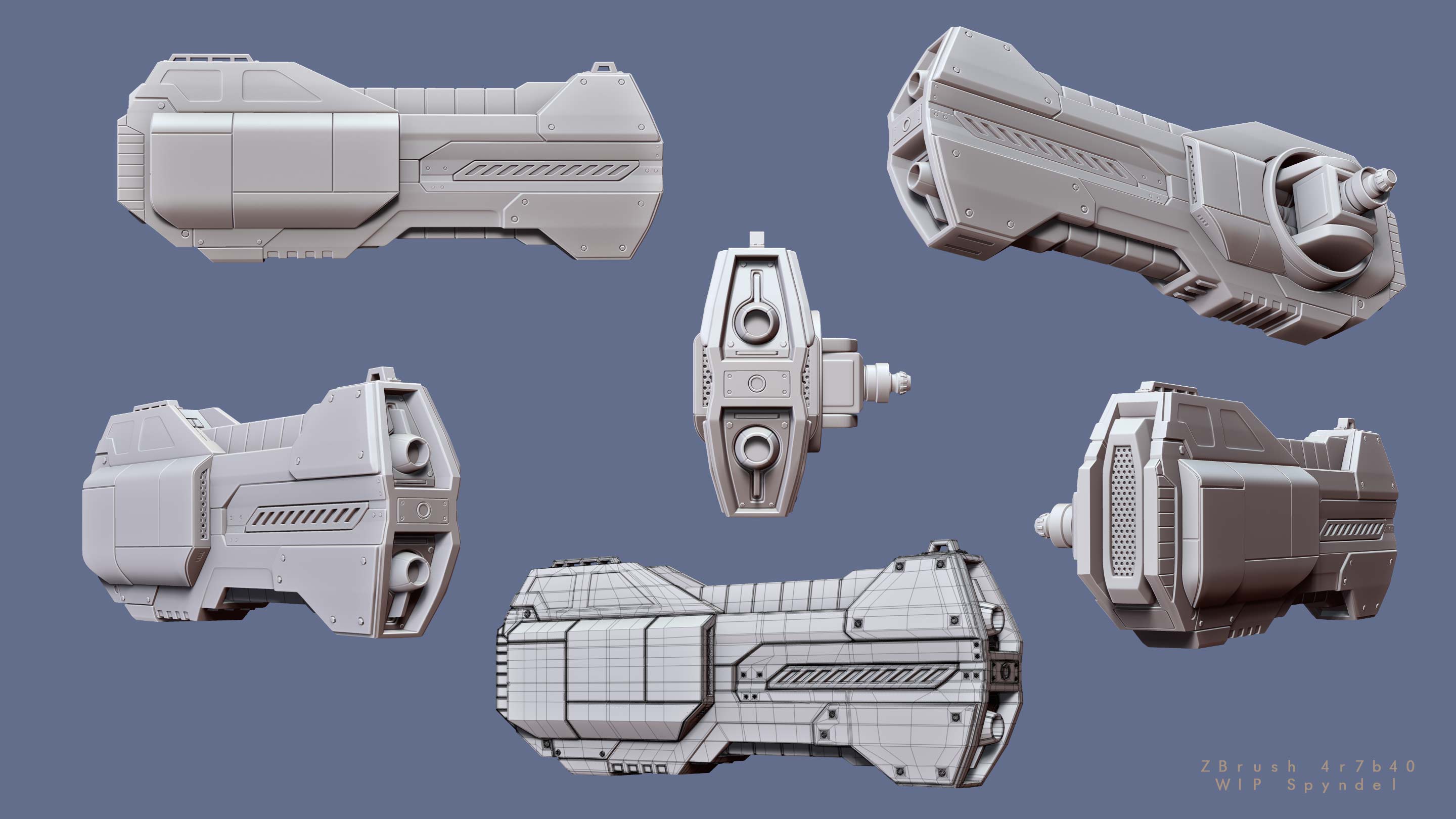 I guess if you are modeling certain things, like mechanical stuff. I wouldn’t use it for character base or architect … Ryan did look kind of lost. Did you see in video.

The only thing I heard Ryan say is that if you come into ZMod thinking it’s going to be like modelling in something like Maya you’ll be disappointed. That’s true. Of course a first generation tool is not going to match a polished polygonal toolset that’s been developed for over a decade. It’s primarily a box modelling tool, not a polygon by polygon tool.

But as far as using it to model something like a character base, you absolutely can. A Base character is not that complicated an object. And in fact, I would claim it’s my preferred way to do things in Zbrush now. It’s far easier and more precise than wrestling with Zspheres, in my opinion. I’m still working on the “doghouse” tutorial the above poster requested, but I can easily put together a base character mesh as well.

Where do they get that green cube divided into four polygons on each side to start with the Zmodeler brush? All the videos start with that I’ve seen. They say just hit the “B” key, then “Z”, then “M”, but doesn’t work.

Hey 3d_Arch this is what I did to get it was create a 3d cube, go into edit mode, then make poly mesh 3d, then goto the initialize menu, then click the QCube.

Also, if you append a primitive cube into an existing tool as a subtool, it will come into the tool in QCube mode, with sections that can be adjusted in the initialize menu.

I’m afraid I don’t know the key sequences for any of this. I tend to rely on my own custom primitives through lightbox.

Before I model the doghouse for which I’ll be using QMesh a lot, I thought it would be best that everyone had the Qmesh fundamentals down. QMesh is the heart and soul of ZModeller, and a lot of fun to use. This should cover the basic points.

QMesh extrudes polys outward or inward depending on the context of your cursor movement relative to the model. In most cases it’s pretty intuitive. I click on one side of the cube, and drag it outward, which creates new geometry from the starting point:

You can then push or drag with an inward motion towards the model which will result in an inward extrusion, effectively “erasing” that polygon chunk. If you dont want to entirely clear it, but rather just reposition it, hold down Shift during the action. You can even push from the side of one of the middle polygons to eliminate entire “chunks” out of the chain altogether, resulting into two separate meshes.

Well, I guess, no poly-by-poly then. Does somebody know a way to assign hotkeys to zmodeler actions and targets?

@Spyndel - I didn’t mean literally! I wasn’t expecting you to model a dog house:lol: But if you were going to anyway I won’t stop you!

Also about Ryan K’s vids. I think he had a really awesome idea about using Unified skin set at the lowest resolution. That was really clever and I can see a lot of situations where that would be very useful such as shadowbox -> unified skin -> zmodeler. However, I think after that he tried to use the new tools on a much too complex geometry. He should have cut up the model into pieces and worked on the pieces separately. Then you can fuse them with bridging or just float some of the geometry. So I think his impression is based on trying to model on much too complex mesh. I’m inclined to see things the way that Spyndel explains them.

poly by poly is tricky and in this example really cumbersome but still possible. in edge mode, use the Extrude Edge option -> go to the “inside” pof the edge which you want to extrude, use shift to only extrude a poly ->move it via the Move edge option

in point mode select stitch two points (I set the modifier to Start point) click first and last point.
and that pointmode you have to use at least two times since the extrude edge mode splits the faces.

if the face is hidden, go to polygon actions, use Flip Faces and flip the hidden face.

BIG THANKS FOR THE TIPS!
1.-The B-Z-M secuence por ZModeler dont work, how i can fix this ítem?
2.-I will love if the Gem Team fix the N-Gon issue adding a Clean_N-Gon bottom(one click)
3.-In this step that im plaiyng with the ZModeler i put in the imageplane the ZModeler popup to make exercise more easy,for me: The “N-gon issue” is not so much something that needs “fixed”, as it is an engine limitation. Zbrush is built around quads.

I too hope Zbrush can handle N-Gons someday, but it won’t be a minor fix when/if it happens.

‘I too hope Zbrush can handle N-Gons someday, but it won’t be a minor fix when/if it happens.’

Which is why we have GoZ to go, if needed, to Modo, or Maya or whatever.

Only: for a first implementation of an entire new ‘wing’ to the ZBrush construction, ZModeler is simply beyond belief.
And the importance of other software will in many if not most cases be reduced to ‘helpers’.

I am very impressed.

One question though: when choosing Mask in edge mode, I can only click to select an edge. It seems not possible to select by dragging/painting over them. Perhaps this was not meant to be so?

One question though: when choosing Mask in edge mode, I can only click to select an edge. It seems not possible to select by dragging/painting over them. Perhaps this was not meant to be so?

Few of the ZMod-related functions seem to support paint-style actions at this time. One notable exception is the custom-selection mode where you hold down ALT to select specific polygons. This mode does allow you to “paint” selections in an unbroken stroke.

@myclay cumbersome it is.
And it seems that assigning hotkeys to zmodeler stuff is not possible at this stage. This is what makes me sad the most, hope we’'ll have this ability in the major release. Right now zmodeler is inefficient, especially comparing to according toolsets in 3dsmax/Maya/Modo/Cinema4d etc, lacks a lot of basic functionality.
It’s good to have this tool at hand though. Sufficient for lazy basemeshing.