The Art of Oliver Pabilona

Hi, I noticed that it’s quiet a trend to post all of an artist work on a single continuous thread rather than separated by projects or artwork. I think it’s a brilliant idea, not only they are compiled, you can also see the improvement in their craft and how they’ve grown as an artist since they started; and for those who are has just started it’s very inspiring.

So I will go with it and compile all of my portfolio here, from the first one up to the latest.

Please comments and suggestion are welcome.

This is C-bot my first official 3D model. He was created as a 3d graphic character for my college thesis "C-bot - c++ chatter bot.

Prior to this project I don’t know anything about modelling characters, but I already knew about 3Ds Max and actually finished the still image tutorial included. Never got deeper due to hardware constraints.

So going back to the thesis, I briefly researched for tutorials and got a fairly comprehensive one. Hindsight the tutorial wasn’t good at all

. During the research I got amazed by how realistic 3d can get. I remember seeing the 3d characters created by Kjun and his wife 97bzo, I was looking at it in awww(where’s my jaw).

I really enjoyed doing the model and always looking forward to the afternoon to get my hands on the computer.
Right then though I’m not even good at it yet I already knew that 3D character design for game and cinematic is the career for me and not 3D game programming.

And that’s how it all started. After I graduated in 2006 I immediately tried to get a job and save to buy a high-end powerful PC. After 2 years I got my own pc in 2008.

This is the what I did “khek of courage”, a 3d version of a character I drew way back in college. At this point I’m still in “very slow” learning stage. It was a struggle juggling my time between my “not-3d/not-programming” related work and learning 3d.
I only have a couple of hours in the morning before going to work. Also since I’m self-thought, I basically winging “everything”, learning from mistakes, doing thing over and so on. Most of the contributing areas that made it slow is in the process of work. I’m all over doing things the wrong way.

I finished this in “almost a year”. This was done in max and edited in photoshop.

It was a slow and challenging moment, but I was quite happy that I got to finished it.
I learned a couple of things from here and there, but for sure I have good long patience I just wanted to see how much I’ve improved. So I did a remake of the old C-bot.
Looking back at this, it’s not yet on an acceptable caliber and I was reluctant to submit this for the Digital Art Master that year:D;).
Though my process and artistic style is much smoother now, and on this project I get to know a little of Zbrush.

Zbrush, love at first use. After seing all the previous portfolio I had a “reality bite” and realized that my work sucks bigtime and I don’t know a lot about the industry that I want to enter. So for a couple of months I keep on researching about the usual process and practices in 3d, the branches, the styles even a little bit of traditional art. Also I keep looking at successful 3d artist and tried to learn a thing or two from them; I read everything including some interviews. I also did some small project to practice on.

So this is the fruit of all the sweat and tears. Still at this point there is a lot to learn, but this quite suited my palette.
30% of this is done in Zbrush. Another version of the old C-bot character. I just want to give justice to that project.
70% is done in Zbrush. I’ll post the rest later, need to take care of something.

Your hard work is definitely paying off. Keep up the great and productive efforts. The work is looking good.

This is my entry in Square Enix’s contest in deviantart.com. It’s nice joining contest, you’re all fired up and inspired to finish something in such a short amout of time. This only took me a week to finish. I think for a couple of days I didn’t sleep.

I did not win though. I still want that intuos 4. can someone donate theirs.

Hindsigh, there a lot of flaws, from the skin, the composition and to too much effects. Just keeping it real Here is one of my latest work. A Low Poly game character.
This one have already made it in some forums top row, magazine, and even made it in Expose9. 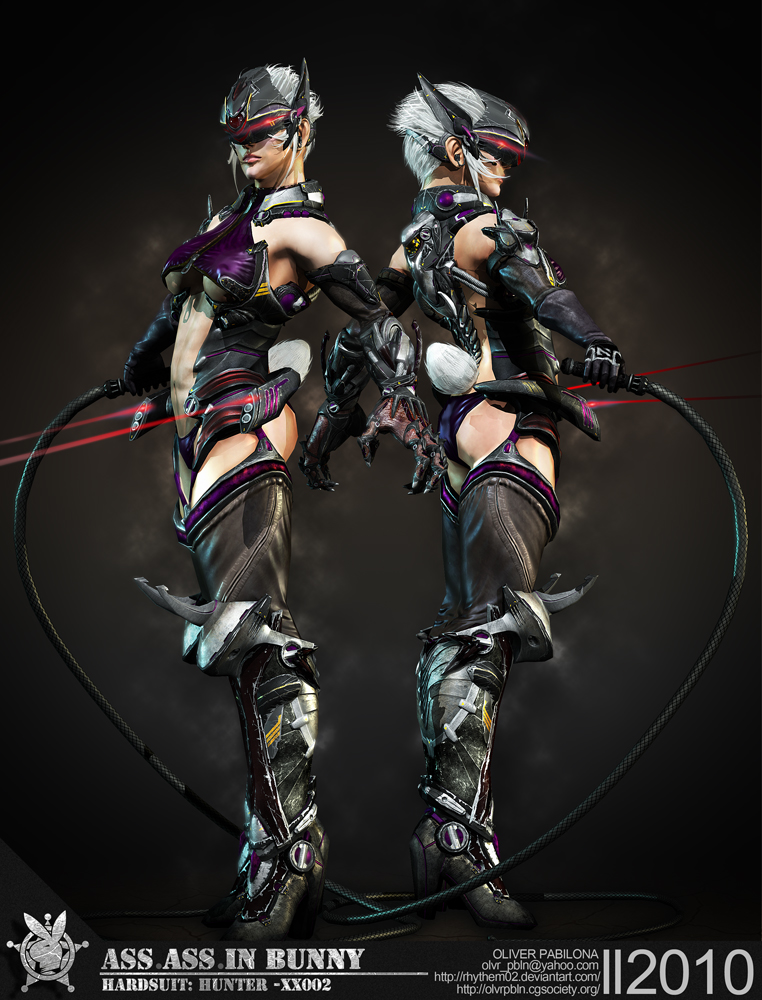 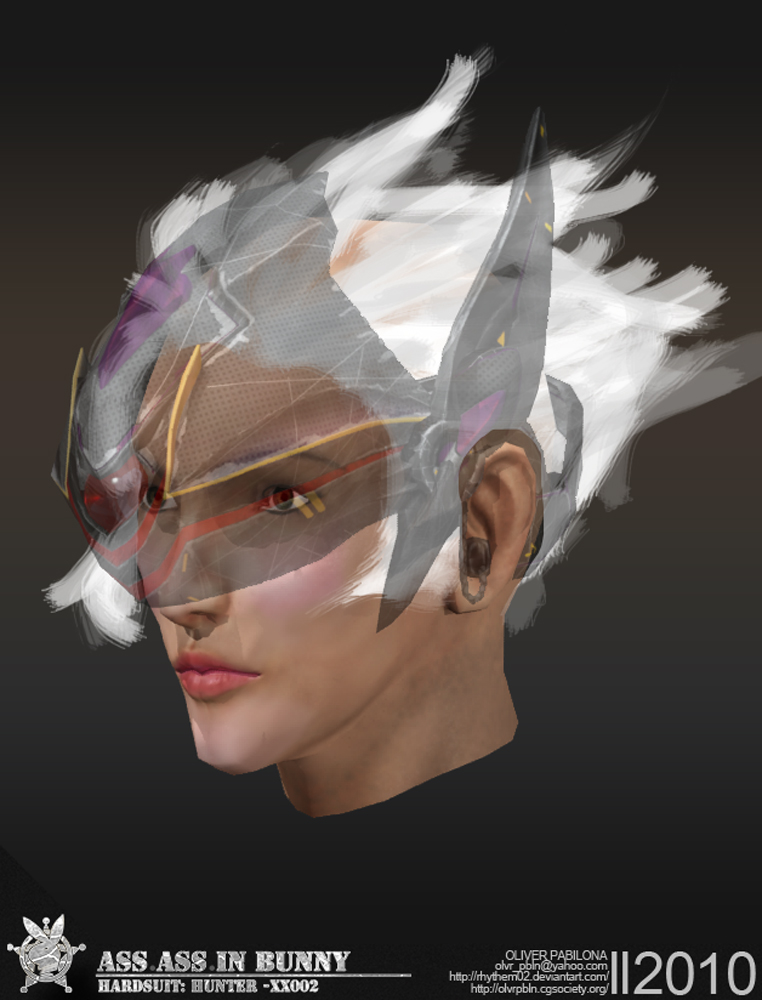 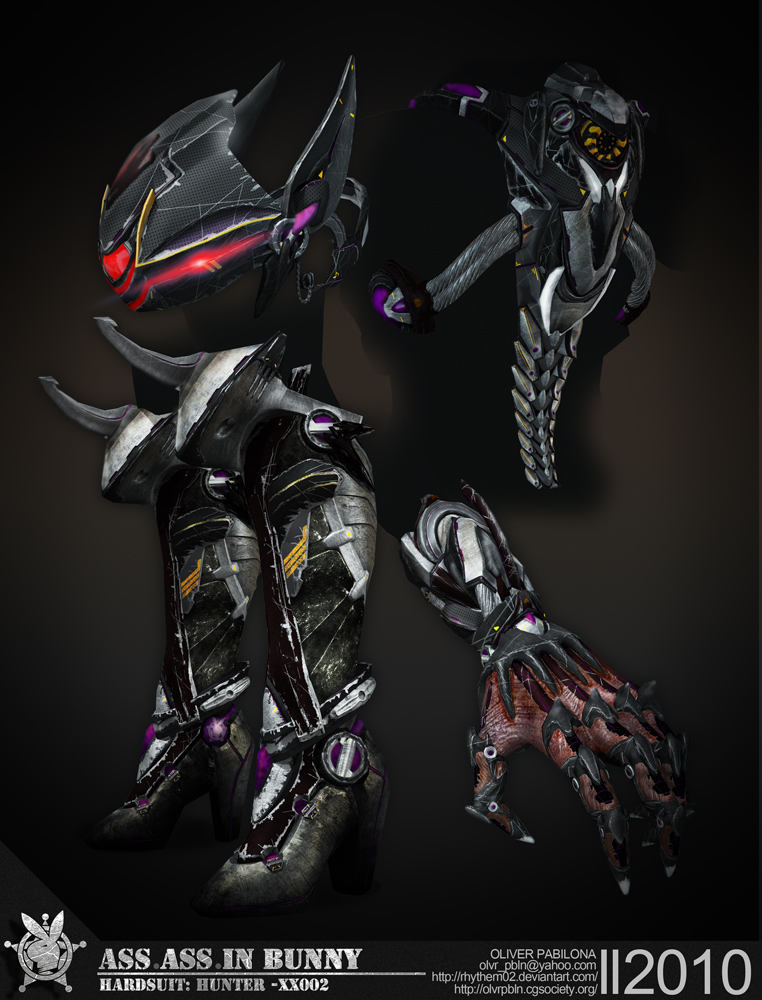 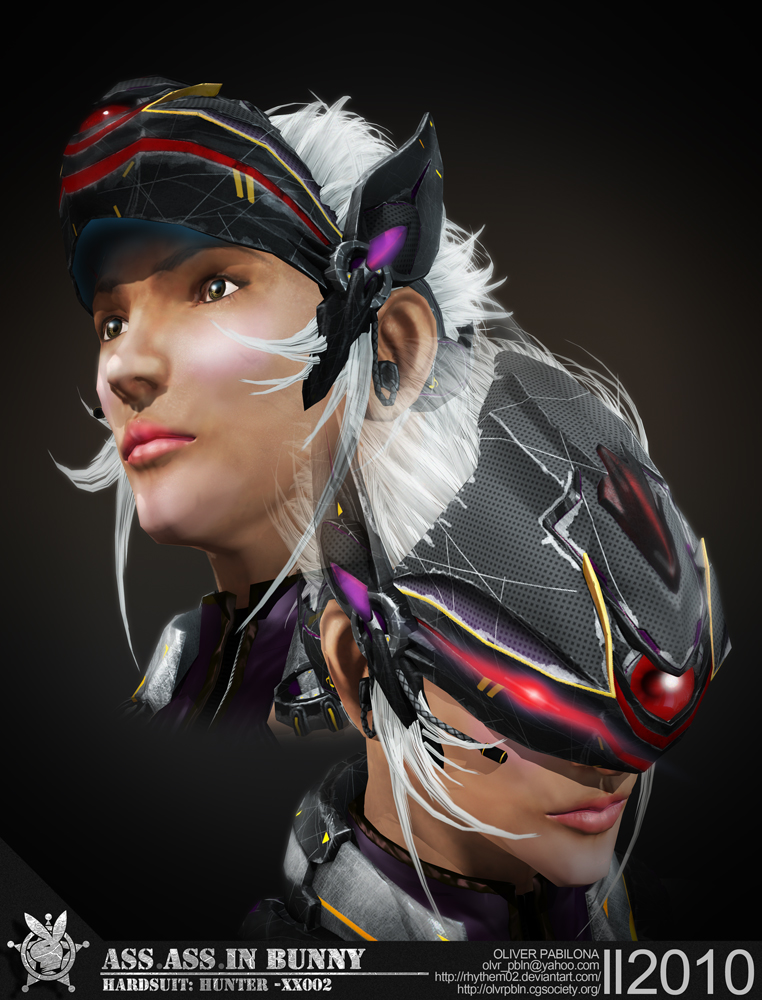 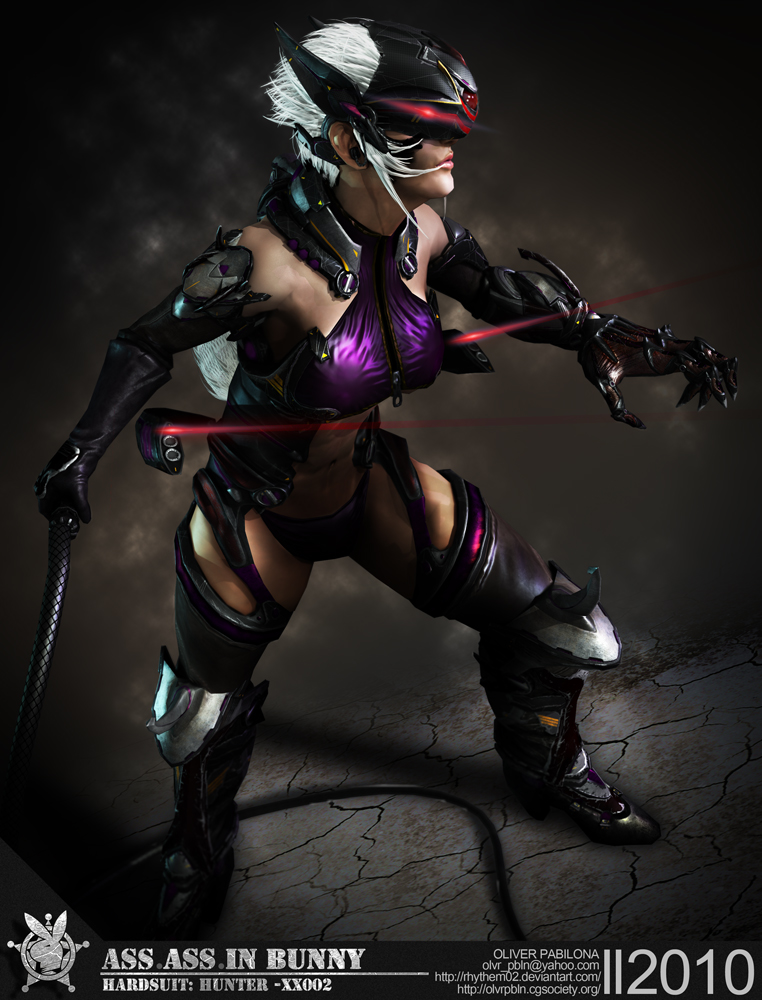 I also attached the “making of”. Just take it with a grain of salt.
http://www.mediafire.com/?4slzxn84wwz4tje

This is my self portrait. I just want to test how much detail I do in 3D from someone who is actually real.
Don’t ask for my pic, I’m camera shy.
Its a nice project, because your skill is tested since there a lot of artistic constraints. During this time I read the Zen of ZBrush by Mike Jensen and I was inspired by it so I decided to do this project; and I’m also a fan of the series.

The thing that I’m curious about the evangelions is “what the hell is behind those armor” so since this is an original version of Eva I have to build my own angel/monster to model the Armor from. So from the references I found on the internet I based my own angel. I had difficulties in the proportion since the eva’s design has long legs and arms slim torso and there is such a huge space in between the neck and the shoulder, it doesn’t seem to support the whole arm. So I decided to just stick with what looks proportional. Another problem is filling those long arms and legs with details, so I decided to somehow copy the details from the human musculature.

On the Armor, the design has to be somewhat still relatable to the original eva design, so the v shaped armor on the torso area was retained, the plug area on the back and some other recognizable features on the original design.

So for the challenge part for the duration of this project I did not open any 3d Software packages, “ONLY ZBRUSH”. The compositing is done in photoshop. so 95% is ZBrush 5% Photoshop.

I was able to further understand the use of the brushes and when to use them effectively, using them is almost like a second nature to me now. It’s been a fun learning experience, thought there are moments where I’m really tempted to open Max, specially on the early stage of the project. But I was able to resist. Hehe 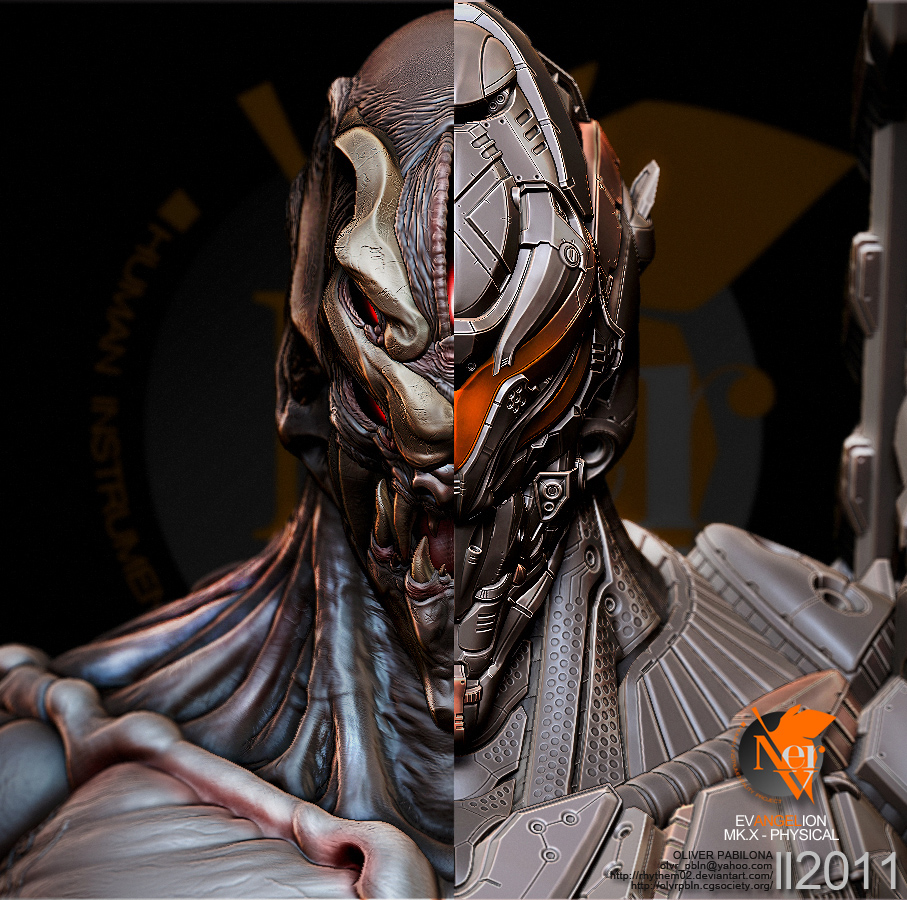 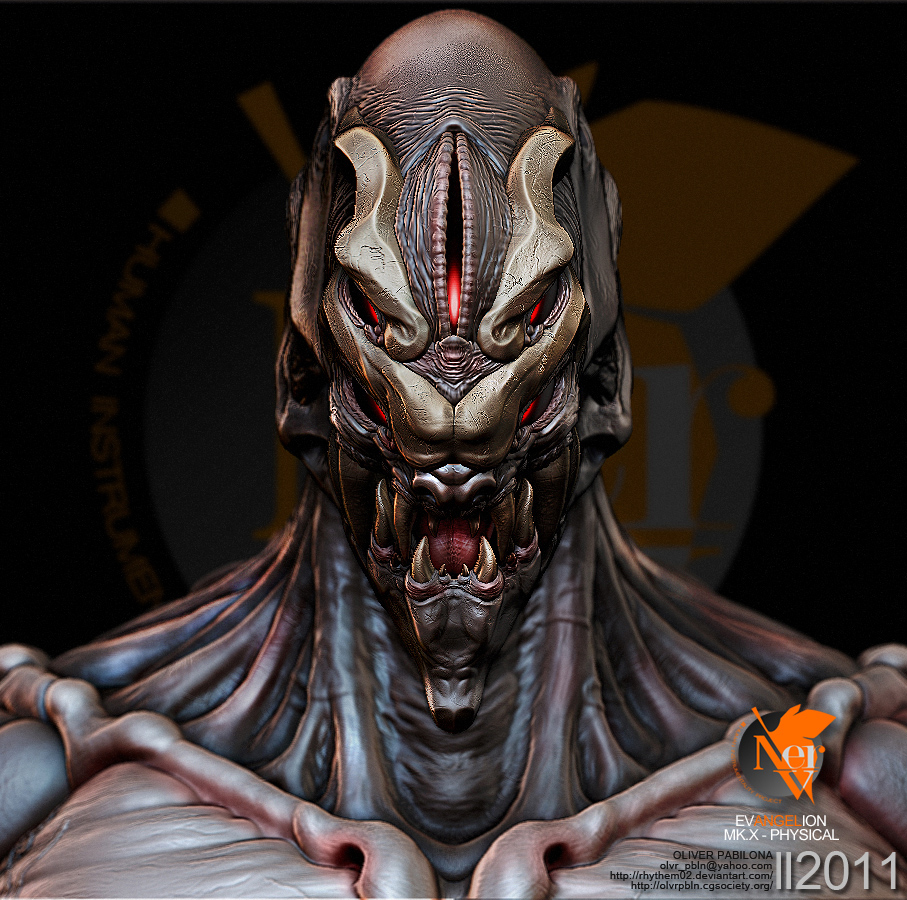 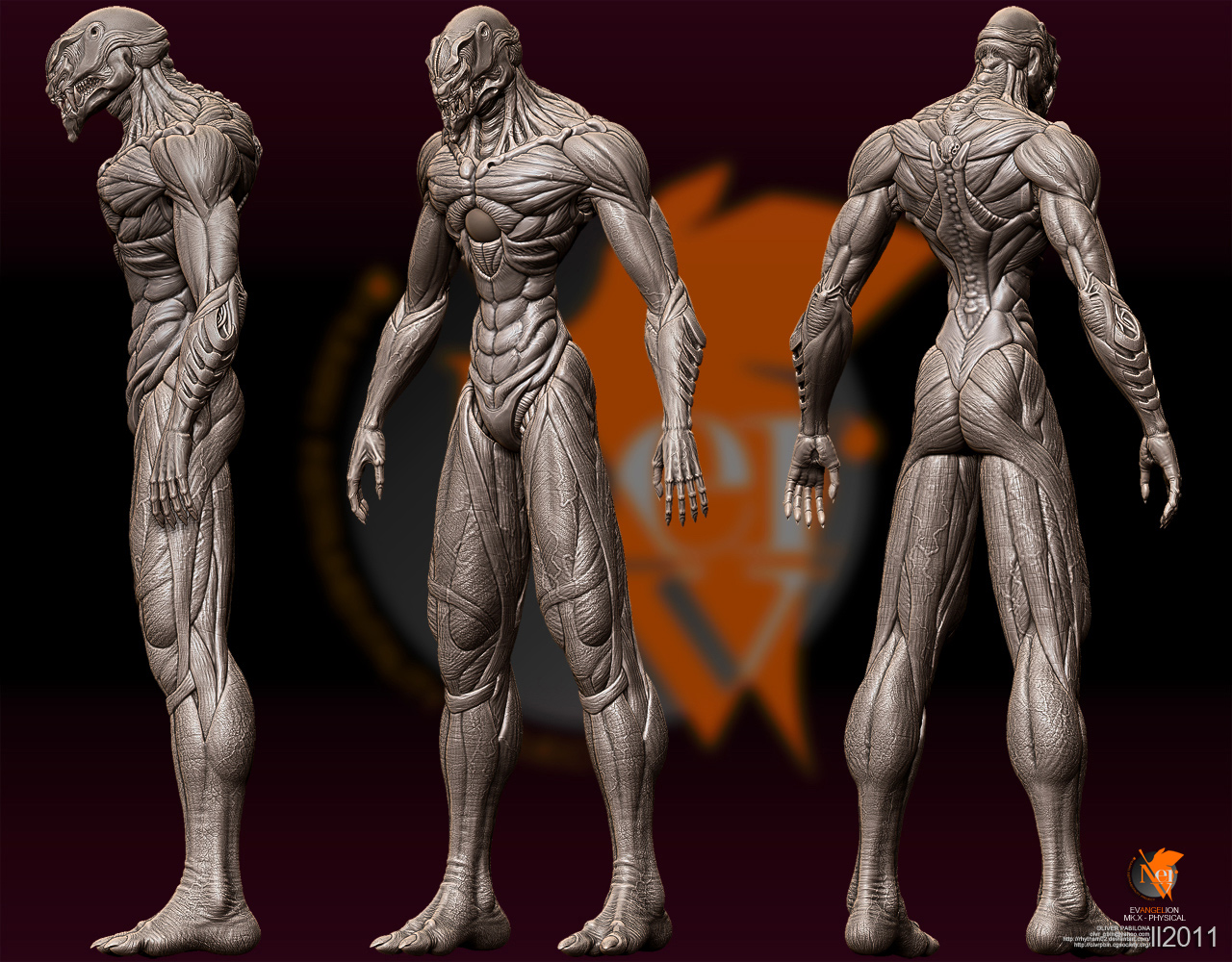 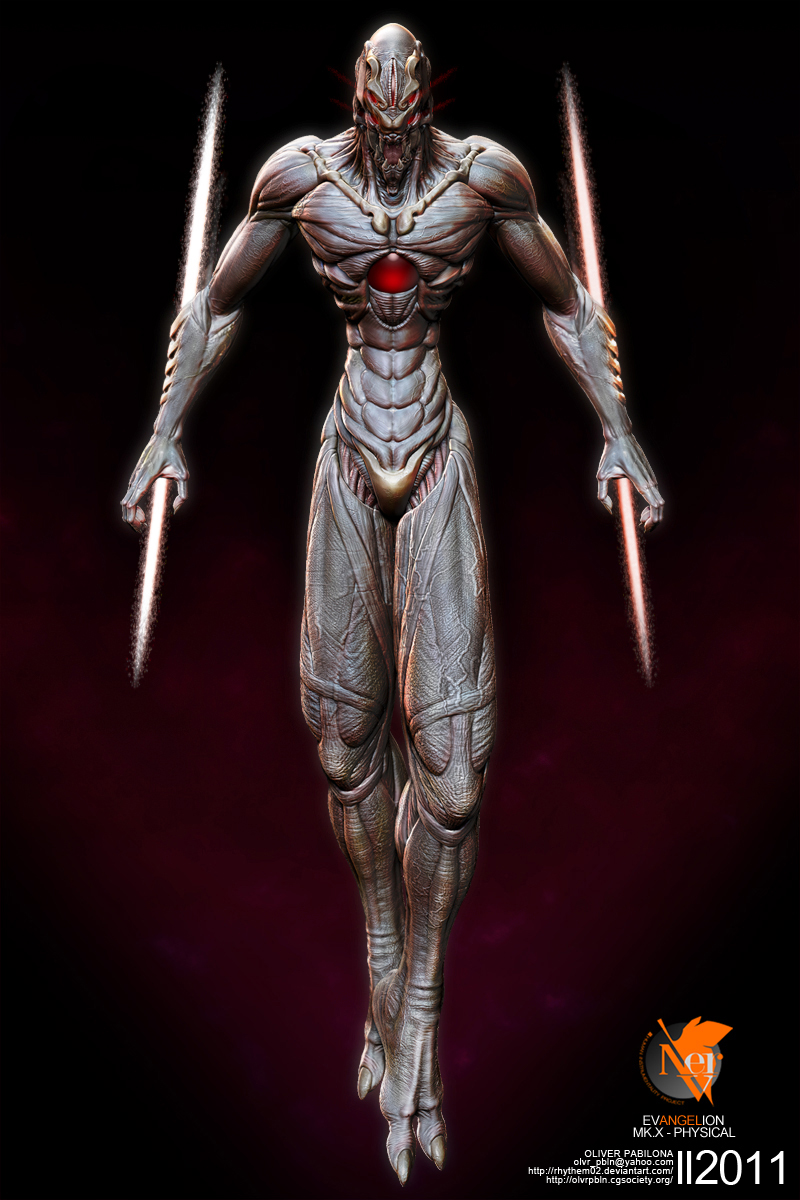 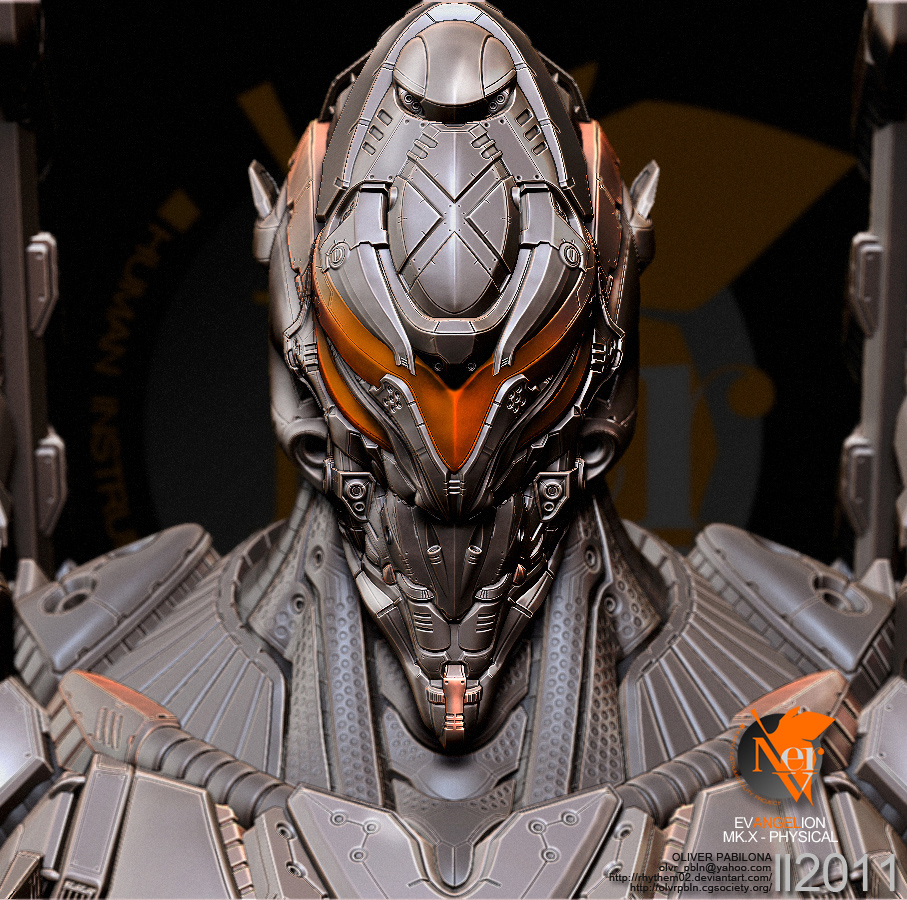 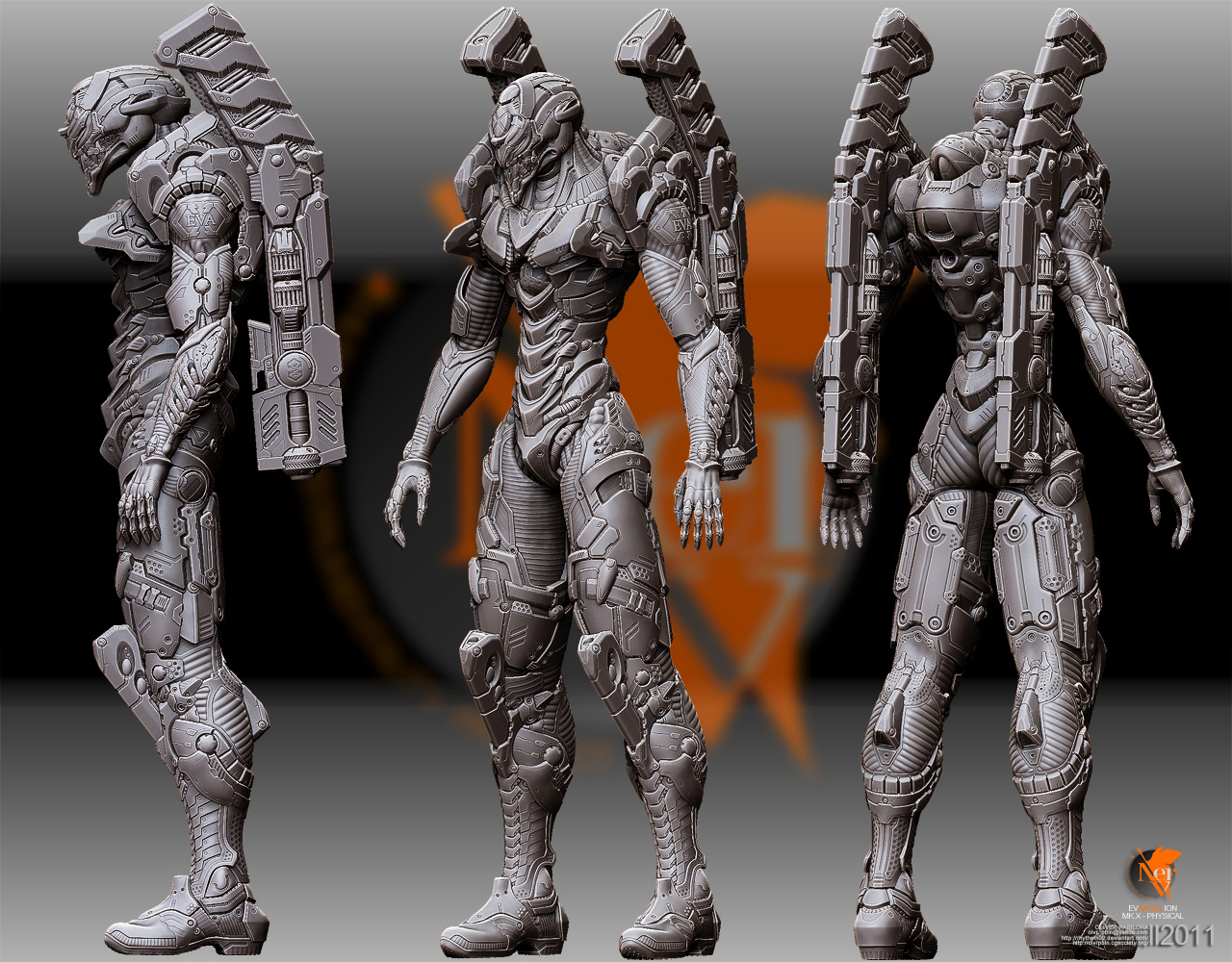 This thread has been so much fun today seeing your progress from your beginning works to this amazingly great work here in the last post Oliver. This will be so encouraging to all those like myself that wonder if we’ll ever get this stuff figured out. Thanks so much for the tour today.

The more i look at these last post the more I love the quality. I’m also amazed at the ability to do fantastic hard surface and organic Zbrush work with equal skill not to mention the pure artistic/creative abilities. I’m putting in my vote for top row.

Oliver, you may want to upload your favorite image and make a thumbnail of part of it. That way your work, that image, would post up in the latest uploaded images to peoples threads. That’s the way people go to look at new works. Seeing them in the top of the 1st page and click on that image.
I think everyone is missing this thread because a picture was never posted in those ‘new works’ images.

Oliver, you may want to upload your favorite image and make a thumbnail of part of it. That way your work, that image, would post up in the latest uploaded images to peoples threads. That’s the way people go to look at new works. Seeing them in the top of the 1st page and click on that image.
I think everyone is missing this thread because a picture was never posted in those ‘new works’ images.

@Ezra - thanks for your kind words, I didn’t make thumbs because most of them are already posted before. I don’t want to do that without a significant update. But I got sometime to do a simple compositing of the Evangelion Mk.-X Physical, though I did not finish it in time for Expose 10. I’ll post it here.

Some recomposite, I think I presented this the last time in a not so good way, in grey and orange. So I did some recomposite to give justice to it and to live up to the “Physical” Tittle.Hope you like it. oh crap that is sweet…