Yey got the steam sale id pack with doom, i forgot how great it looks and it inspired me to make my own version of the imp monster. Also been a whiole since i did anyything ;d
2mln polies, i day of work, maybe i will push teh detail up to 10 mln, or maybe start another doom monster. Thinking even about texturing and actually putting ingame also.
Hope you guys like it.

Or should I say the ‘no skin’ look-

thx, the idea with the muscles was that as he is mutating, his skin is connecting with the bones and becoming so hard its starts to crack and layer itself. And i pretty much ignored the anatomy alltogether, made up it as i went, so i wouldnt call it anywhere near correct ;D
Anyway detailed him up a bit, will try to interpret the cacodemon next.

well this is just fantastic, though I’d look again at those Glutes. Something about them seems off.

Hi Slocik, that’s cool that your not looking to go 100% on your anatomy (creative freedom). I’m digging it-

However, do revisit the ‘glutes’ (as Framedworld has pointed out). Taking a ‘second look’, it seems as if four giant fingers are grabbing hold of his (it’s)glutes-

Other than that, real cool looking!!

hah, actually that part gave me some problems, originally i was gonna give it more of a human look, but i decided to drop any correct anatomy on his ass and in the place where his genitalia should be, and make something up ;f Now i think i rushed a bit through the blocking out shapes part, since i made all the forms in like 1h.

Anyway tried to make some changes to it, damn i spent like 2 h on it, made like 10 difrrent versions before i found a one i liked ;] Its crazy it took me more time to make his ass than to make almost the whole core character before detailing ;D

heres 2 versions on the right the new ass, on the left a blend between old and new. Dunno which one to take, but no matter which i go with, i will have to detail it up. This is just terrific, can’t stop looking at it. What a great idea, and great skill.

Aha, now that seems to work better (don’t know, maybe cause were human and we tend to relate to things were use to seeing??). Either way, this gives more of a flow to your character. Way to go. I bet it was a (here it comes) PAIN IN THE ASS!

Seriously, I am keeping an eye on this post and your work my friend, love it!

k, i started texturing, and damn me if i suck at it, i have no idea what im doing, but im doing something ;D
Anyone any ideas how to give it a menacing look ? I would use what you have as a base and then mask by cavity. paint over with a dark blue/purple/black to accentuate your carved in detail. Then reverse the cavity mask and use a veeeeryy light blue to accentuate the veins.

Also Make his legs abit longer and thicker. I think it would add a lot. Great job so far by the way:)

Maybe give a slight tonal change in recesses, maybe add a purple hue

yeha now that you mention his legs do seem a bit short, but i swear i did made them longer, maybe moved them around by mistake later ;f Tunnel vision ;D

Also i started a new model in mean time based on unused bioshock2 concept i saw being posted here today, decided to make it and give it a proper modo render with ss and stuff.

Heres the start . I plan on splitting him later into 2 layers, one for the transparent skin and one for the muscle layer underneath it. And after i finish all the anatomy fixing, i will give him those big skin folds, for now i want to focus on getting his anatomy 100% correct, since it will be extremely hard to do later and not brake the folds flow. 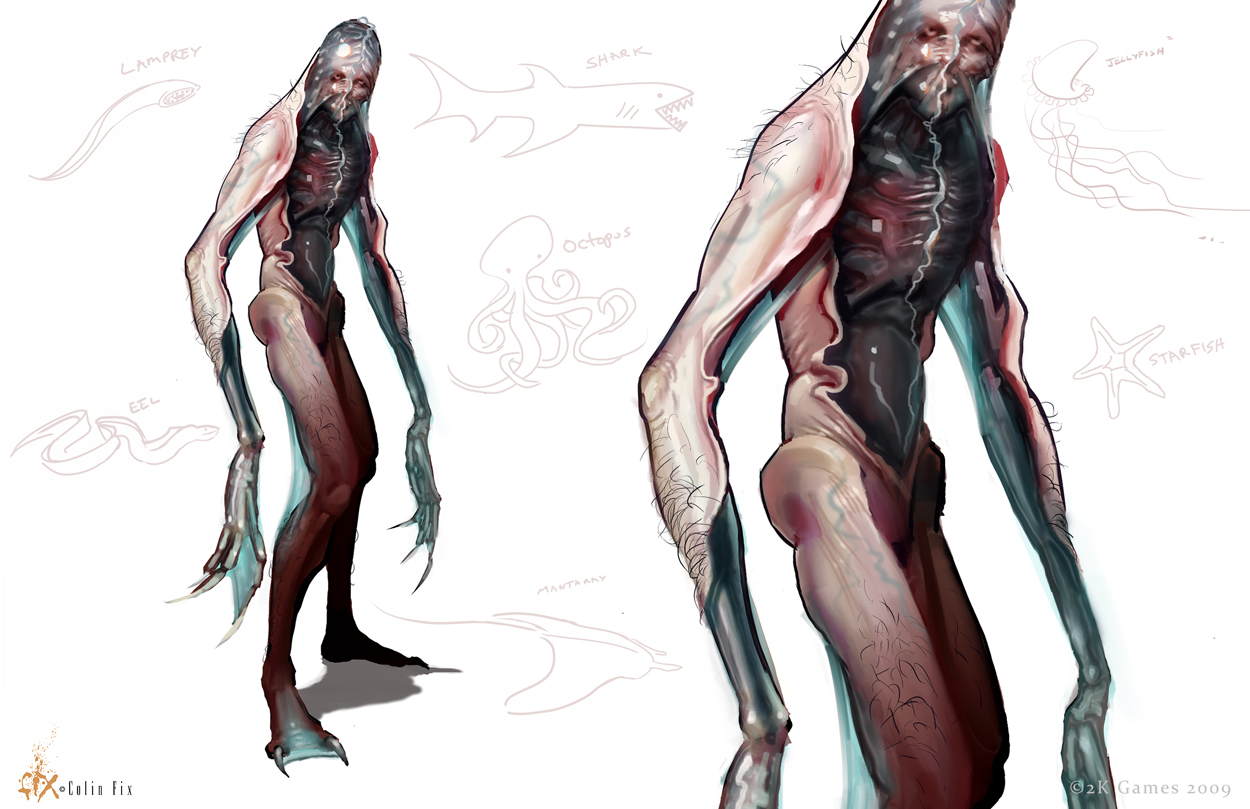 Layering your texturing helps a ton. At least working with that concept in mind. In Zbrush I lay base color then I play around with masking as I work my details. Thinking of how real life skin is made up like: Veins, blood flow, muscles, fat, then there is the pigment last. I imagine a monsters is not so different. In that case you can study frogs, insects, you name it.

Also I saw in a book once about drawing dragons and there was a bit that I found interesting. It talked about eyebrows and features that accented evil or deviousness(sp?). Like sharper features and angles, lower inner brow while outer is higher.

haha, wow man thats one useless advice, considering my monster has no eyes, eyebrows, or eye sockets on that matter ;f But thanks anyways, i guess ;D

small update on the other model, already finished the bones , and half of his visible muslcle layers, i really hope it wont look like ass when rendered together.
It took me whole evening to make his skeleton, last time i do a monster that has transparent skin ;f Holy smokes, you made a skeleton-wow. I think something like that would drive me nuts! Keep going, keep going.

Thx, but I didnt make the whole thing, only the hand and legs, the chest and the head are just a generic human skeleton.
Anyway another update, got all the layers done, now texturing and a render, i really hope it wont look then as bad as now ;D

Oh and somthing i found on my hdd i made few months ago. Its a hero from the game Hon i use to play sometimes, Slither. Might as well upload it.
Based mostly on a redesign made by one of the players, Lhune. Hers her da site, some great works there.

Slither The Serpent of the Seventh Pit, feeder on the sick and the weak, was summoned forth in the last days of the war between Man and Beast. A cunning conniver and whisperer of false promises, Sl... 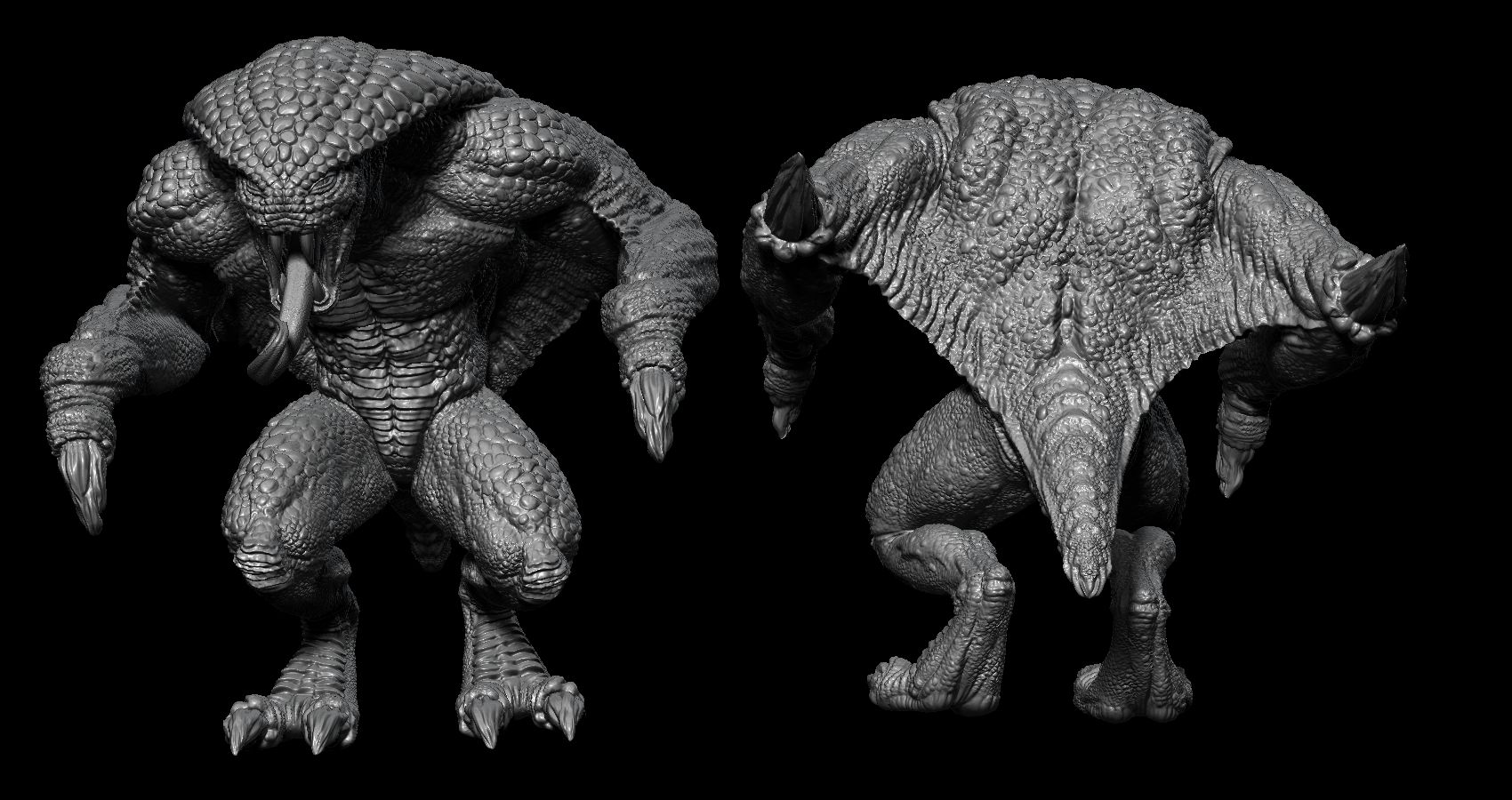 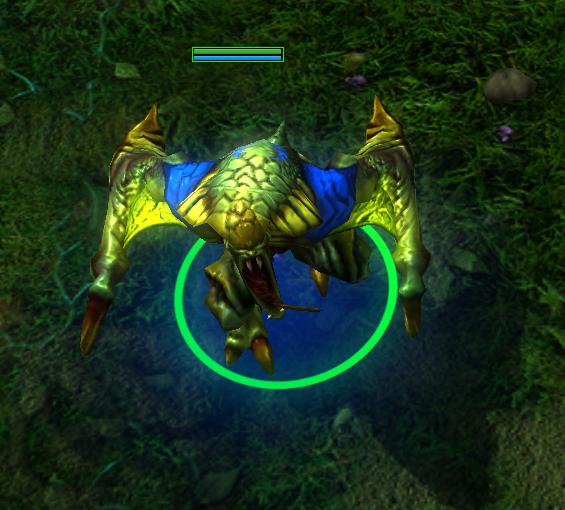 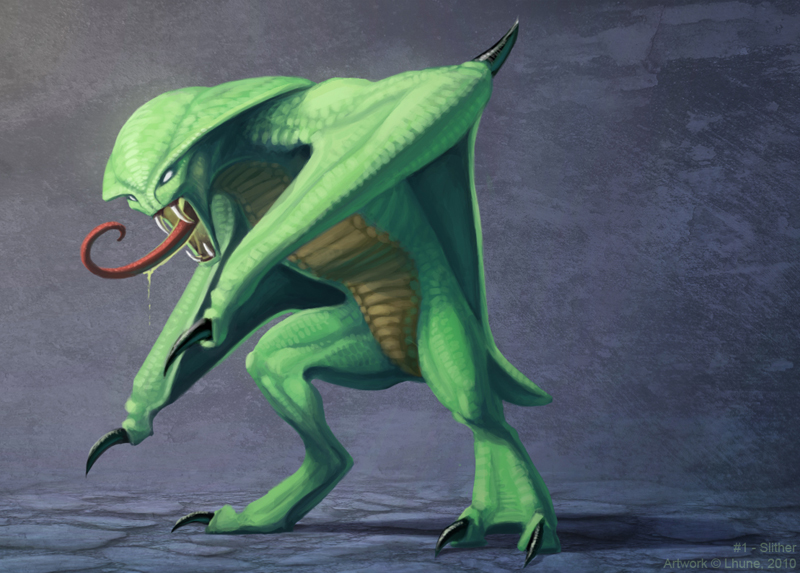 I think you might have overdone it with the bumpyness, the concept is much smoother, and that gives its a serpentine feel to it. Snakes aren’t bumpy, their plates lock flat. they are smooth.

Hey dude,
I’m digging your snakeman quite a bit, but I have to agree with the previous commenter: the scales are too bumpy. They are more lizard or armadillo like bumpy hide, wheareas your charachter is more sepentine, so smooth, flat scales are more in line.