Ok I’ve had a few ideas floating about in my head.

I liked the idea of putting monsters in everyday situations. So I’ve had a few ideas based on that. One was just a stupid little sketch of two witches in a cafe, really really ugly, looking like they’ve lived for hundreds of years, with wrinkles as thick as the bark off an oak tree.
One’s smoking a fag and the other one says “you know smokings really bad for your teeth and skin”

The other idea I’ve had was another trick or treat one. And although I like the idea I’m kind of put off because so many other people are having great treat and treat ideas. But anyway the idea is to have three scary looking monsters with costumes that seem to have just been placed in a hurry. Maybe one has a really cheap mask tied awkwadly to the side of their face and the elastic has wrapped across their eye and nose. They’re all trying to look as cute as possible at the person who’s opend the door to them. Of course they’re monsters so they’ll look bloody awful.
But the person is oblivious to this and is going “ooohhh your costumes are amazing, have some treats” you can see they’re arm and hand reaching out of the door full of treats. Maybe one of the monsters has a huge grin fully of teeth at the sight of the persons arm.
It’s only when you look closer you realise that there’s a leg and maybe some other remains of the original trick or treaters who had the unpleasent misfortune of running into the monsters before they got up the drive. Maybe one of the monsters could also have a shoe hanging by the lace in their mouth just to emphasise it.

Sorry for the waffle and the bad spelling. Would like your opinions on this.

I like the first idea just becuase I like things simple and to the point. The second idea is good too, but I don’t know how difficult it would be to pull off. It seems that the more indepth the plot line, the harder it is to portray that in a scene so everyone gets it and without the scene becoming too cluttered and complicated.

I guess that’s just me, you may not have any problem putting that all together in a way that’s hard to interpret. My scene is probably “overly simple” so take my oppinion with a grain of salt hehe.

.
One’s smoking a fag and the other one says…

As you’re probably aware, this expression has an entirely different connotation depending which side of the pond you’re on. Either way, it conjures an interesting mental image, and I look forward to your entry

I like both ideas alot, but the first one I think made me laugh more when I pictured it in my head.

Ha ha I totally forgot about the different interpretation of the word fag. Interesting idea though, don’t think it would be very politically correct

I’m still on the fence at the moment. I drew up a quick sketch of the trick or treat one last night and hopefully I’ll have some better idea by tomorrow.

Thanks for the comments

neet idea’s i like the second one, its more challanging to pull off but it has alot of flavour.

Coming up with an idea is a painful process.

I do like the first one but I’ve just got the second one stuck in my head now. I’m hoping that the three monsters expressions will sell it. Have them trying to look cute but failing miserably. I’ve really got to get on with this soon otherwise I won’t hit the deadline. I’m going to try mocking it up at lunch.

Many thanks for all your feedback, it’s really inspiring and motivating.

Well I was thinking it would be the masks they stole of the poor victims. So probably the usual cheep plastic masks you get in your local shop, but put on in a real hurry so they’re not actually covering they’re faces at all. Maybe one could also be munching away on the candy they stole.

I’ve done a few sketches and I’m happy with two of the characters but I’m still trying to nail the third one. I want him to have a really mischievous look because he’s hiding some body part behind his back.

I want to have this done by tomorrow so I can get on and start modeling over the weekend. I’m even thinking of taking a couple of days of work to get some of this done.

Both ideas are great, but i prefer the second.

hey man, i know what your saying about the amount of trick or treat idea’s but then it is a Halloween type cc… personally i like both idea’s.

idea 1 your could have Say Draculla in a fitting room but can only see the clothes, but i think someone is doing something simular… you evan madussa frozrn solid at looking at her reflection

idea 2… is cool and funny and personally my fav

Thanks for the replies guys. Sorry it’s taken a while to get going on this.

Here’s some of my initial sketches. The last image is where I’m at with the characters. I’m happy with two of them which I’ll start modelling now but still working on the third one. The one with the cone head, he’s going to be the leader of the pack the one with the plans.

Sorry about the quality, I don’t have a scanner so had to take them with my phone camera. 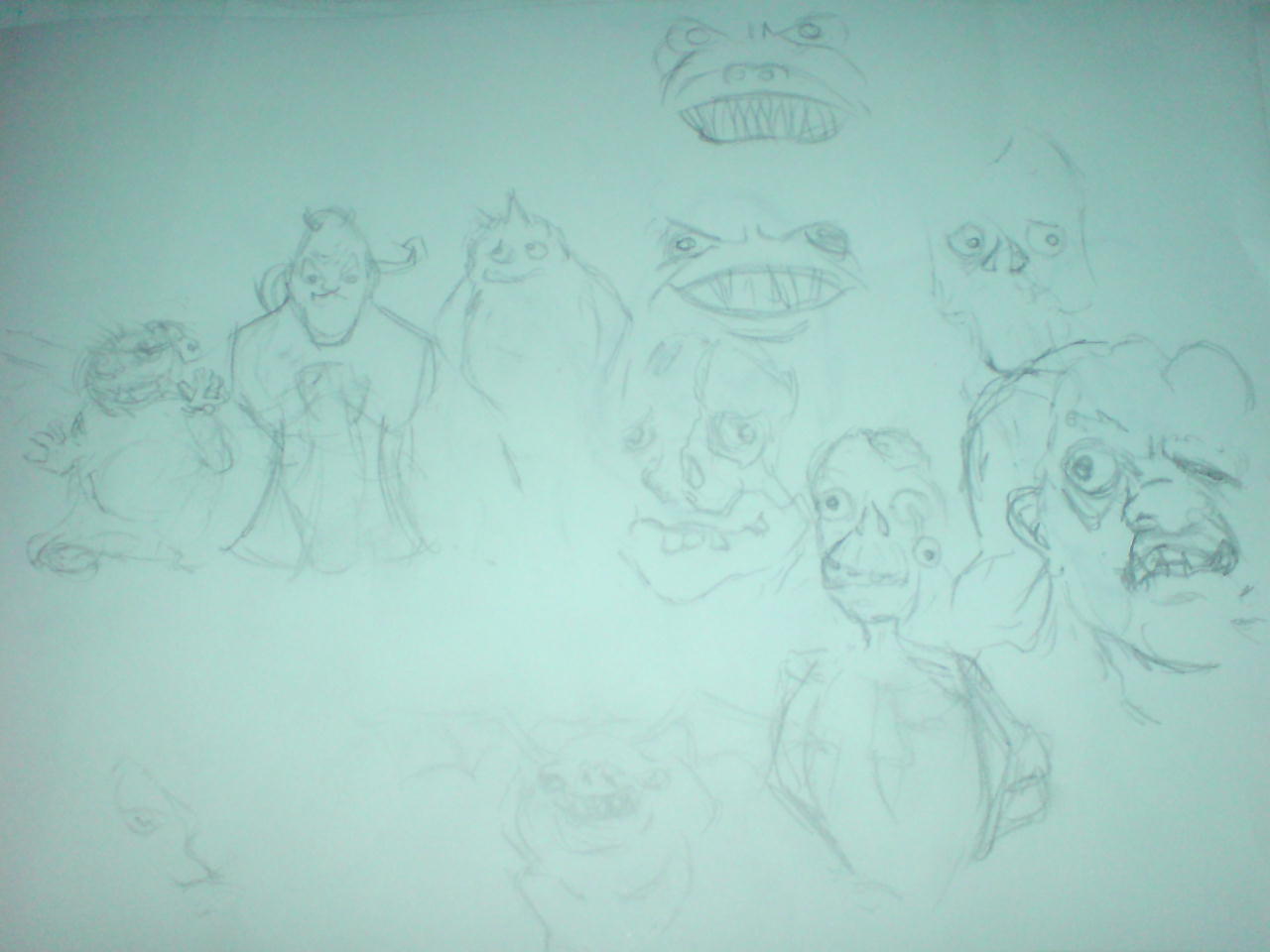 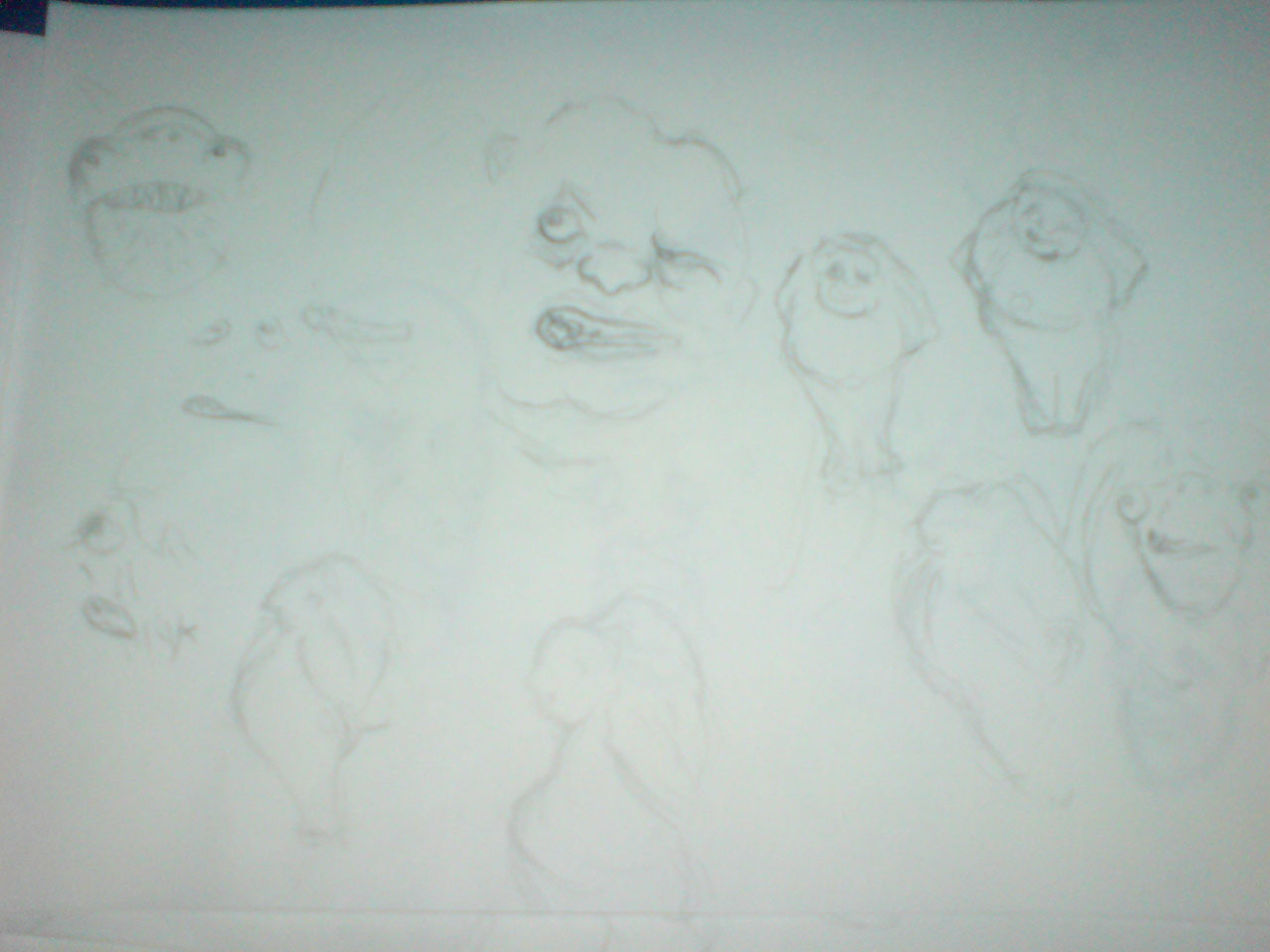 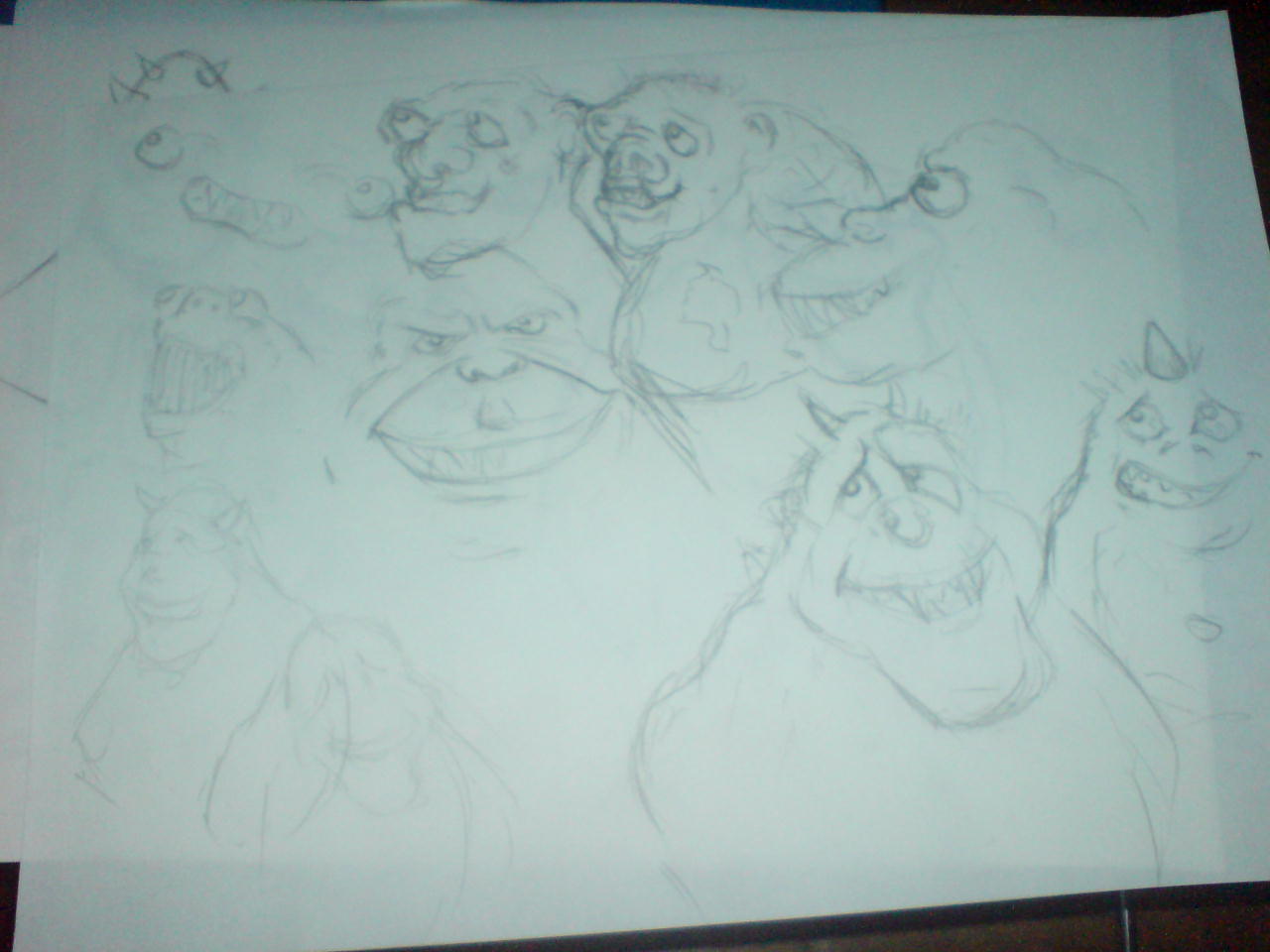 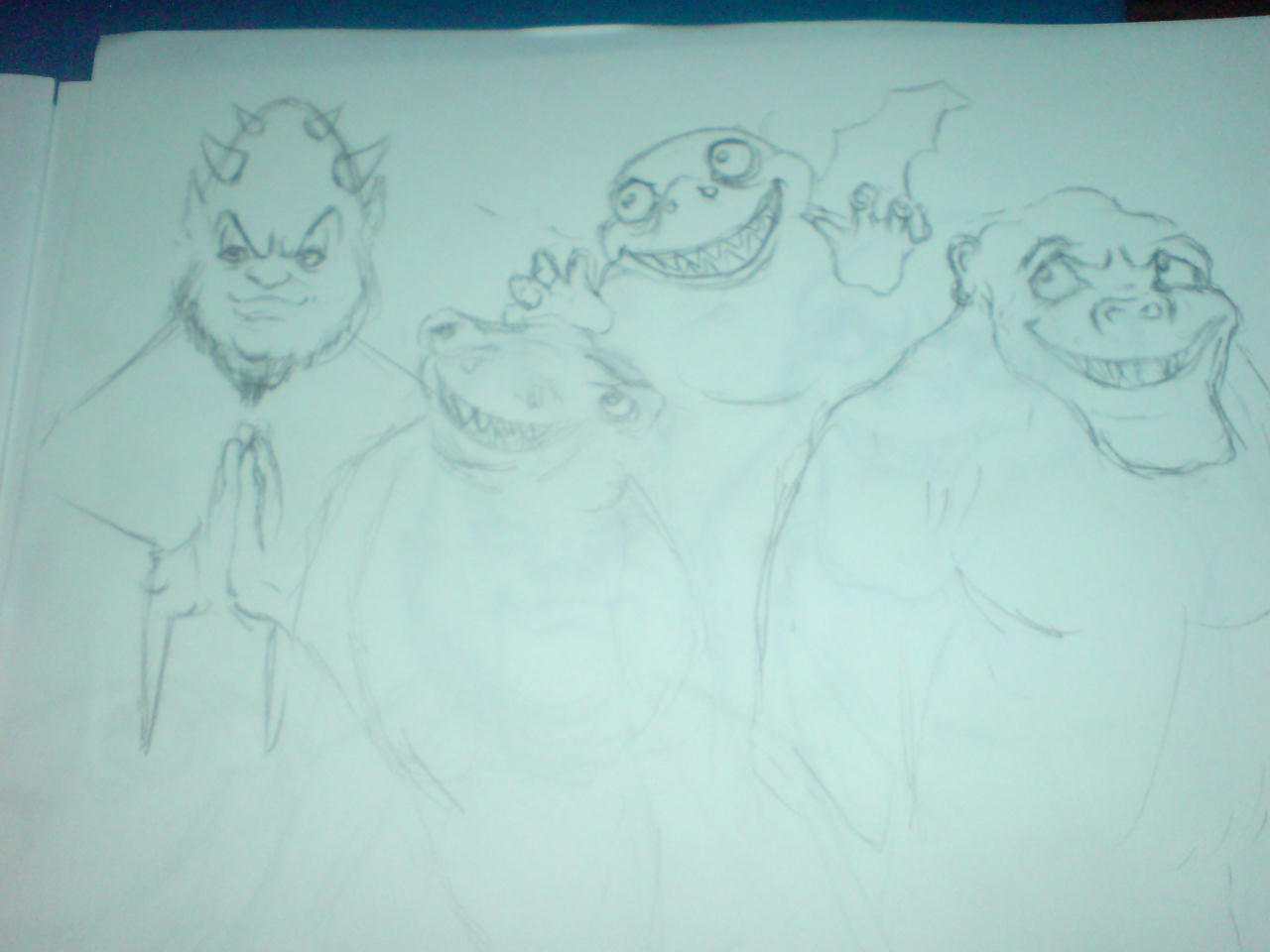 Ok here’s a quick test render of the first monster. I haven’t thought of a name for him yet. This is pre_Z-brush. I want to add lots of creases in his cloak and some detail into his face abd hands.

Oh he’s also missing his wings and a few other bits. I’ll hopefully have him wrapped up this weekend. I’m thinking I’m going to need all of them wrapped up by next weekend so I can spend the remaing time setting the scene and lighting it. 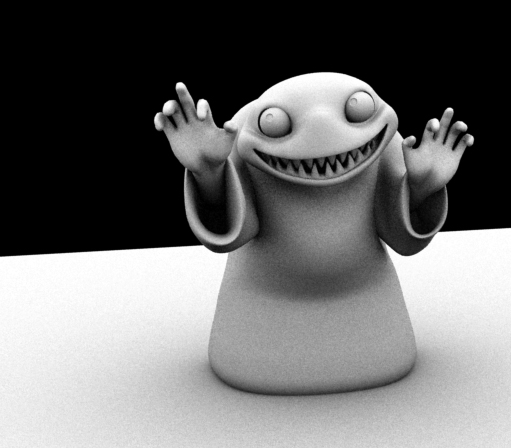 Ok managed to get quite a bit done today on this little guy. I’m hoping ot finish of the fine details tomorrow and maybe even have him textured. Need to get on with the other characters otherwise I’ll never get this done. 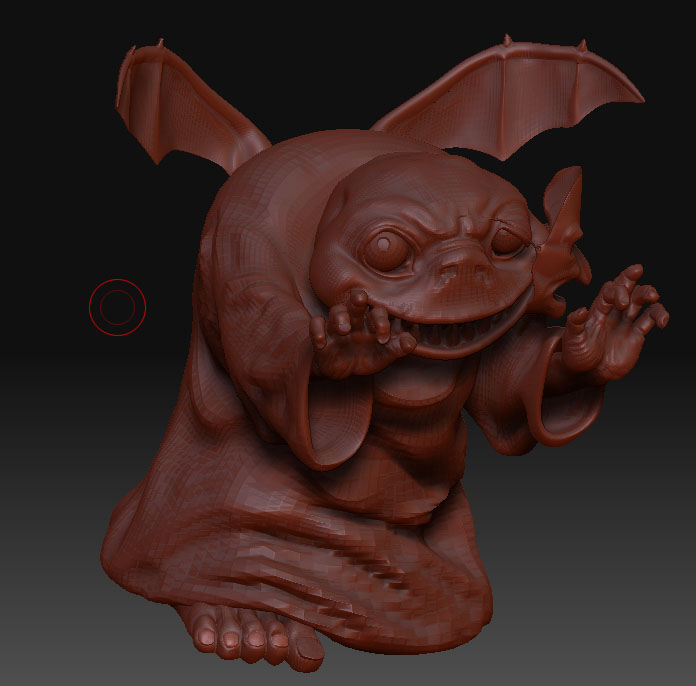 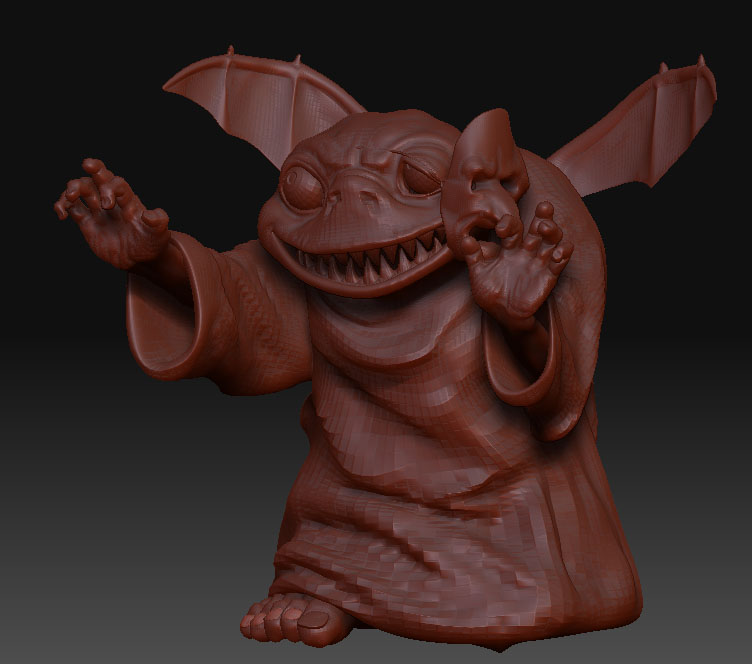 Hey thanks Harmonic. I’ve been checking out your work and you’ve got an amazing amount of stuff done.

Here’s an update, unfortunately it doens’t really look much different to the last pic I posted…except I discovered some of the new really cool shaders that Zbrush 3 has to offer. I did spend a lot of today adding all the finer details some of which you can’t see because they’re in HD mode. I think I’m just about done with sculpting him now. I’ve still got to finish his foot but I really need to get on and texture him. 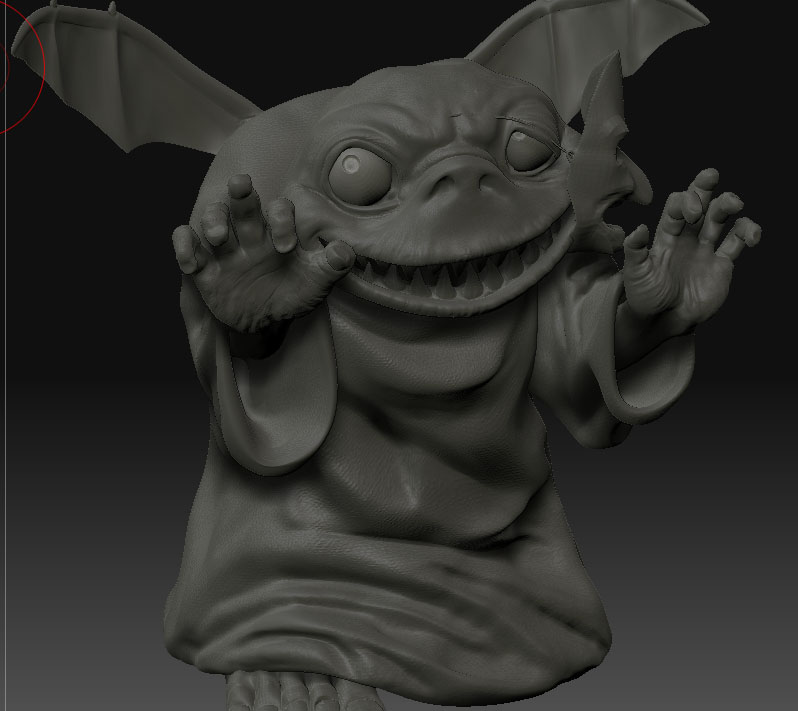 This is taking forever! Ok well I’ve got his face textured…well the colour map anyway. And his coatume. Just need to do his feet, hands, mask, urm yeah I think thats’ it.

Really sorry for the slow process, but I am loving doing it, especially using the cavity brush . 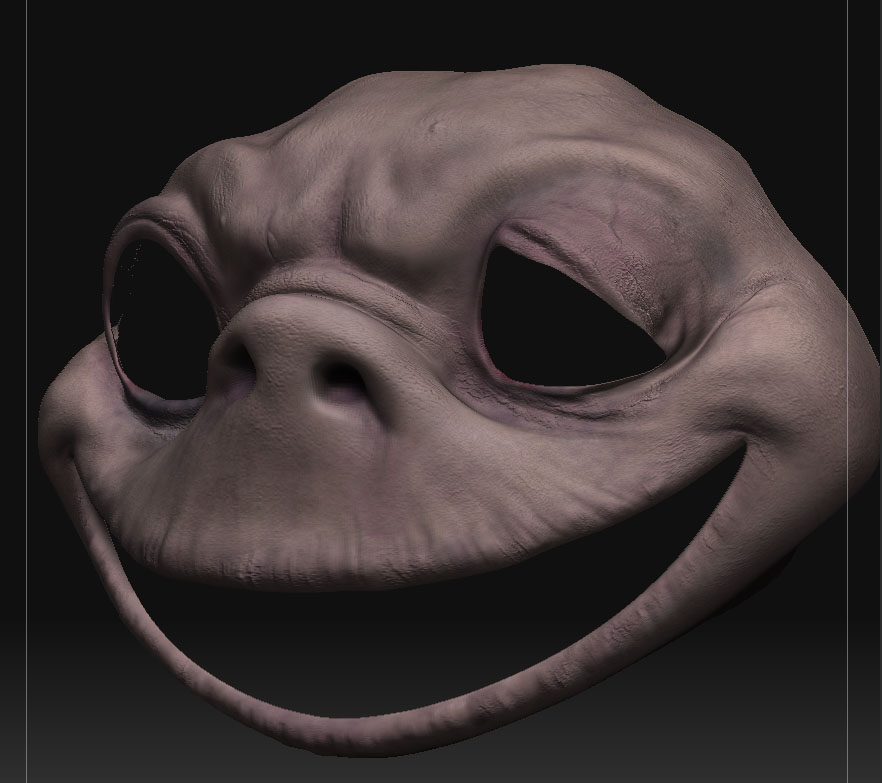