Hey, nice concept and idea. Progress looks to be going good, I think tho Mr Pumkins head looks a little too big on the body, but that view could change with the whole scene. Great work

Yeah I thought that and was going to reduce his noggin a bit more.

I think it’s just that the body is so wiry and the head is obviously bulbous and bright orange. I thought i got the proportions about right but maybee there’s an optical oddness happening because of the contrast in materials because his limbs also look a little short to me now!?

Anyway Thanks for confirming what I thought though because you get so used to looking at it that you forget the little wrongnesses if that’s a word!

Still, I’m a long way off yet and sure a whole lot more will change before it’s done lol!

Well as far as I am concerned that process clearly works well.

Poly painting is how to achive different materials on different parts of a model. You select something like the standard brush, turn off the Zadd and Zsub buttons select M or MRGB (if you also want to add colour) and off you go.

But to be honest the results your getting a amazing without that! :D

If you want the whole model to work from a base material and not keep changing when you select a new material on the perts you’ve not painted yet, select MRGB and then Fill Object on the colour menu.

I’m on the floor.

This is wonderful work!

Thanks for the feedback!

Feel like I’ve not updated for a bit but I’ve been hard at it on the remaining characters!
Still so much to get done!!!

Here’s the MummyKid Character, Iooked back at my original sketch and realised the little SkullKid was the girl and the mummy was the boy but I think they work better this way!?

Anyway here’s how I started,
kind of like Frankenstein putting all the bits together! -

Now, what kind of shoes does she wear? lol! 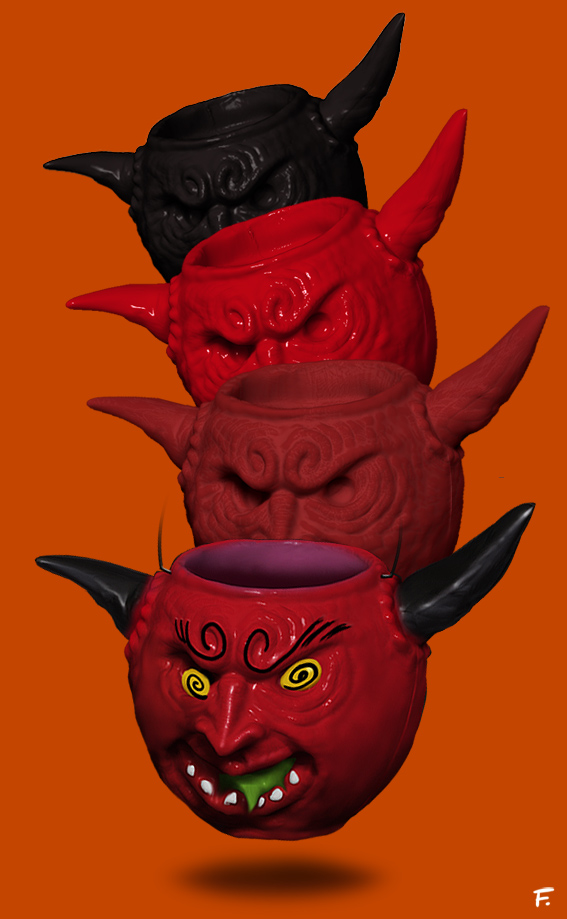 And here’s the unfortunate Mr and Mrs Pumkin! lol! All these are coming together wonderfully!

fish, how did you do the chin hairs on Dad-o-lantern?

The Chin hairs and the kids hair or any loose strands on the clothing etc were hand drawn. I don’t know how to do hair or fur in Z-Brush yet so I’ve just been drawing on any little details once I’ve composited the pieces together in Photoshop.
I did find the Fish Hook tool very useful for doing the roots on Mr Pumpkins hands and feet but it would start to stretch the mesh if you tried to hook anything too small, plus you’d have to do each hair individually that way and it would be a nightmare I think.

There must be a fur or hair plug in, I have heard mention of such wizardry but like I say I’m not quite advanced enough yet and also I’m used to hand drawing stuff anyway and I think the combination works quite well, makes the final characters more illustrative I think.

I was going to do more chin hair on the Dad pumkin so you knew he was the dad but couldn’t decide if it would look odd because pumpkins don’t have hair! but I guess they don’t have tree bodies and live in houses either so maybee it’s ok to have a pumkin beard!

Well I really need to sleep! this Halloween challenge is learning me lots about the Z! but I need some other kinds of Zzzz’s lol!

Anyway here’s all the characters together for the first time to see if they work!?
What d’you reckon? Well this definately my last post for a while!

Just a couple of close-ups - Im off to my coffin, night, night.

They play very nicely together

Argghhh! i just came here to find all this work had been done! For some reason I’m not getting emails on this thread.

Fishadder, I think the beard is a funny idea, or you could give him a 60’s center parting using his leaves/vines on the top of his head.

I think he needs to be raising an arm in defense of the horror of seeing his mum and dad as lanterns.

Other than that, I am speechless as to how far you’ve come along with this having never used ZBrush before.

That is looking really cool, lovin the scythe, overall render looks good too

I’ve used it a couple of times previous to this though!

I made a weird angler fish from a ball of clay and I started a Medusa character with ZSpheres after watching a handy tutorial previous to this but the competition has focused me on a propper task from concept to completion which is always best as with my illustration i’m used to working to a brief.

I mean this when I say it’s testiment to Pixologic and ZBrush that someone as relatively aged (compared to some of the kids these days lol!) and set in their ways as me is able to get going and use quite competantly from the get a go a piece of software that just feels so intuative!

My friends who work in the CG movie industry have had to learn a lots of other more technical stuff and i Always despaired at how un-user friendly they were and never really thought I had a look in!
ZBrush on the other hand although probably just as complicated lets you begin artistically not technically and as I’ve been finding out rapidly becomes more addictive than sleep!!!

Anyway I Hope I get this challenge done! I’ve got all the background to do now but maybee I can keep it simpler to set off what’s goin on in the foreground. Anyway thanks again for al the replies, tips and advice, will check to see how you’re getting on when I have a spare moment.

I think it’s all coming together excellently. Very well done.

Great work fishadder. All the characters are looking great and beautiful colors as well.