Well here’s my entry in this very cool competition.

I wanted to keep it as simple yet get as much visual interest and 'Halloweeniness in to it as possible and keep it kind of fun with a dark twist too so here goes!

Basically 2 little kids dressed in Halloween costumes are Trick or Treating on Mr Pumpkin head who should be the one to Scare them but He is terrifiedd by them and to make matters worse they come brandishing his parents pumpkin heads as Lanterns!!!

I love the organicness of ZBrush so all the knarled trees and pumpkin skin should be right up my alley and I really loved the Organic Faun character form Pans Labrynth so I think I’ll Take Mr Pumpkin Head in that direction rather than have him in clothes, the kids aren’t set in my head yet but one mummy and one Freddy or Jason character or maybee little girl Vampire. Also we’ll see how much time I have but I’d like to add background detail to the inside of Mr Pumpkins House so you might see his folks pictures on the wall and recognise the lanterns rather than have him have to say it in a speech bubble?

We’ll see, I’m actually scaring myself silly at the prospect of all the work but I’ve been after a solid challenge to get my teeth into and this is a belter so bring it on!

comments and crits as always

PS whenever I post a thread I don’t get a nice little ZBrush man logo before my post like everyone else!? I get a sort of file icon! I’m not bothered but I’d kind of like to know what i’m doing that’s different and if it affects my post in any way?

Great sketch! I love the style and coloring. Next I give it more detail and get the angle/pose I wanted and stretched it a bit to get a more startled/scared look. then tweaked and colour corrected in Photoshop.
From doing the head I know now not to be too precious about the backs of the models as time is tight and it’ll be a flat image anyway.

onto the body next

PS whenever I post a thread I don’t get a nice little ZBrush man logo before my post like everyone else!? I get a sort of file icon! I’m not bothered but I’d kind of like to know what i’m doing that’s different and if it affects my post in any way?

The icon’s different for threads you start, or ones you post in.

Still don’t get it?
I thought i posted in the SCARED SILLY thread like everyone else but they all have a diffenernt logo!?
Am I posting in other peoples threads?
Because that’s not good as i need my own thread for the competition!?

It’s just an “I posted something here” indicator. You’ll see it for threads you start and other people’s that you post in. I saw the Z in your thread at first, now I see the file marker 'cause I replied.

Keep posting your updates in the one you started.

I still feel a bit new to posting but Thanks again

Here’s an update on Mr Pumpkin 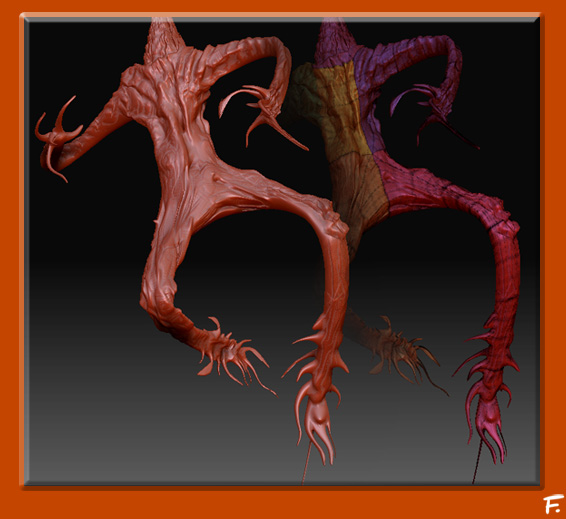 Time to crack on with the little trick or treaters! 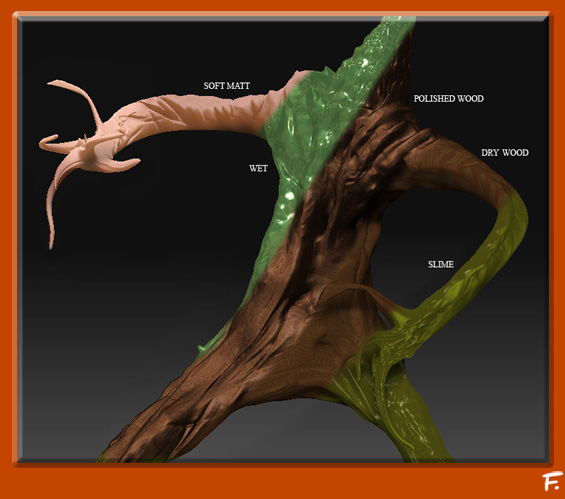 Love the concept art for this one! Can’t wait to see this one done…

This is one of my fav’s. nice work

So have you rendered each of those materials seperately and used something like Photoshop to compose the layers?

Sorry I’m just getting used to 3D rendering being new to all forms of 3D art work.

When this is over would love to see a step by step of how you did that.

I like your sketch and coloring. You really have a good eye for color. Your modeling is unique as well. Mr. Pumpkin looks neat and kinda reminds me of Mr. Scarecrow on Wizzard of Oz.

Dustbin1_UK it’s pretty much as I’m showing it here!

I’m new to working with ZBRUSH, finally got a decent computer and ZBrush 3 although I’ve been a big fan of this site for a while.
I’ve only attempted a few models previous and have managed to gain a basic knowledge of Z-Spheres, texturing, colouring etc BUT I only know enough to get by really!
I have no clue yet about lighting, propper rendering or even how to have more than 1 material type on the same model at once like matt moss on a shiny tree if it’s actually possible?
So I’m basically building and posing the pieces how I want them in the final scene then saving the image in multiple textures and materials and then layering them in diff strengths in PShop to make the final character or whatever! lol! It works really well and I’m managing to get pretty much exactly what I’m after but I bet there’s a propper/faster way!? lol!

The Pumpkin man was a layered pumkin model head added to a layered tree model body with extra tweaks and colour correction in PShop like the inside of the mouth and eyes. I added little things like the mushroom which was also done in ZBrush in fact I was mucking about with mushrooms just before to add to the scene somewhere later and the Jellybean Material is superb for those, it seems there’s a texture or material for every ocassion lol!

Anyway I’m waffling but I absolutely love ZBrush because It feels so natural and organic to sculpt! I’ve never been any use at 3D modelling packages before
I’m a traditional illustrator/sculptor who always fancied the PIXAR thing but just couldn’t ever get my head around the interfaces on stuff my mates use
but ZBrush lets you go to town straight away with a ball of clay and the learning curve and helpful comunity here are really great too!

Anyway Thanks for all the positives so far! I’m really getting a buzz out of this challenge and it’s great to see all the contenders work in production although some make me scared silly just looking at their quality!

Woody - Mr Pumpkins body was inspired or at least I had in mind the Faun from Pans Labrynth I didn’t look directly at him but remember he sort of blended into his environment and was very organic so thats the way I wanted to go, also I thought clothes on him would be a real pain and way too fiddly at my current level of skillZ! lol! 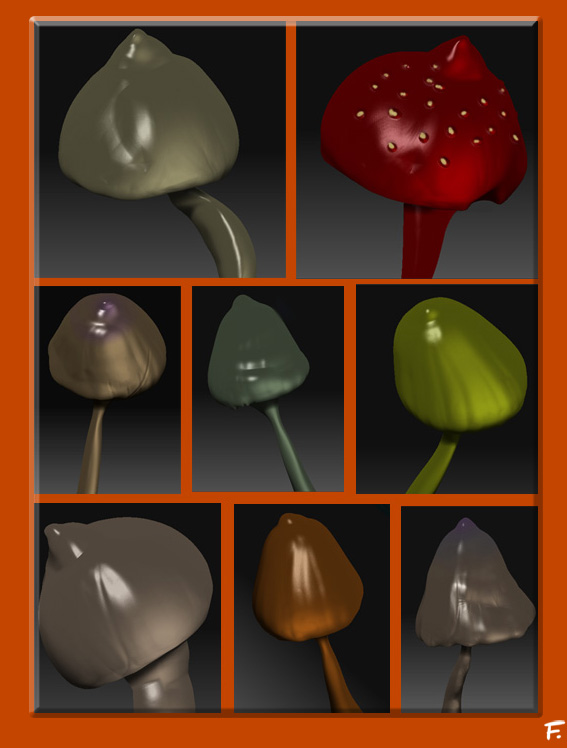 Love the pumpkin guy. Very nice gesture and form on his body and head.

Been working on the first kids mask and skeleton suit 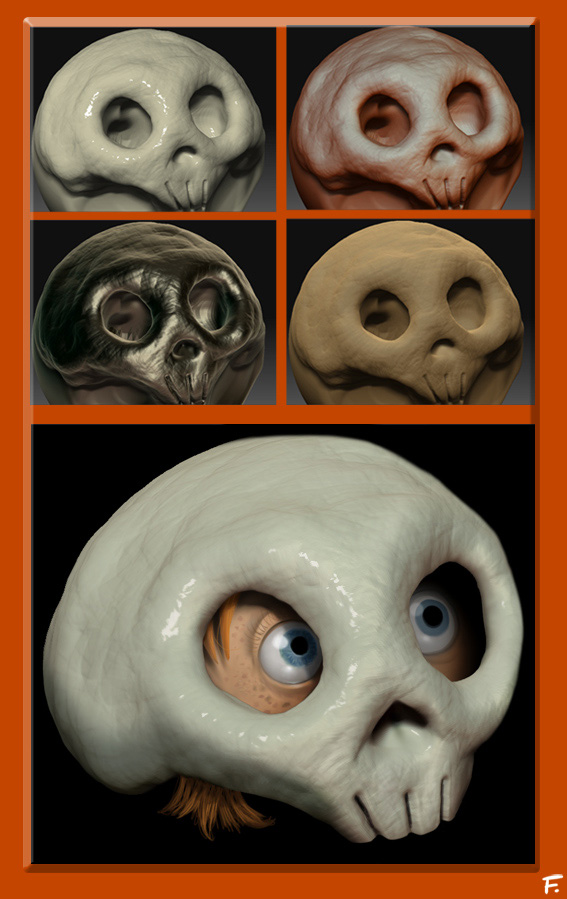 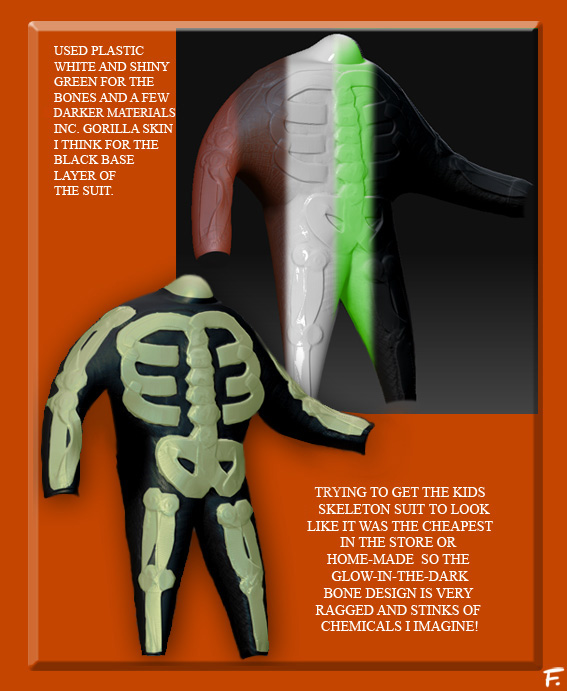 Here he is with some extra detail and added Glow-in-the-dark! Looking great! I really like the materials you are coming up with.