The Action Hero Contest may be over, but we’re not done bringing you good stuff from it! This week is the second of five “Making Of” articles from the top winners, highlighting goldo_O and his creation: Captain Hornet. Adrien’s entry was characterized by style: a stylishly stylized character, and a great sense of overall style in the presentation of every image throughout the project. Now we’re pleased to be able to bring you a detailed walkthrough of his thoughts and techniques as he worked on our Third Prize winner.

“ZBrush must be used for the entirety of this challenge.”

What was at first a kind of constraint in the rules of this competition quickly became a great feeling of artistic freedom: no UVs to unwrap, no skinning to worry about… and apart from the rather uninviting stage of a detailed retopology, I had a blast working on this character. Here are the different steps that I used to create it:

The idea was to create a burlesque character, both in the design of the costume and the features of the man wearing it. So I decided to use a lot of super heroes’ sartorial stereotypes (very tight spandex suit with leather underpants on top, excessively long cape…) as well as other clichés such as an insect as the character’s global theme.

Quentin Wilson, despite his almost ridiculous suit, takes himself very seriously and loves his haircut so much he doesn’t wear an integral hood to protect it! I wanted to give him a condescending look, caricaturizing his British aristocratic origins.

To me, the face was the essential element of the character, and the point of departure for this project. After a very quick sculpt of his bust in ZBrush, I had a quite clear idea of who Captain Hornet was to be and was able to draw the model sheet in Photoshop.

Having exported the model sheet as two square textures, I projected them onto two Surface Plane SubTools and activated Transparency. I imported a ZSphere as a third SubTool and started to create the skeleton in the front view. I created the Adaptive Skin with a single subdivision level, imported it as a fourth SubTool, masked the ZSpheres and then used the Move Brush to make the mesh match the character’s silhouette from the concept.

The aim here was not to go too far into detail, but to lock down the proportions and the anatomy at first, and subsequently the costume’s design. Most of his accessories were created from cube primitives.

At this stage the use of PolyPaint lent itself perfectly to quick tests of new costume designs and enabled me to get a notion of the final look.

As I had the final design, I could start with the retopology. Personally, I prefer to draw a preview of my final mesh’s wireframe with PolyPaint before starting the real retopology, as I find it easier to erase and redraw lines, testing new loops, etc., than doing it directly with ZSpheres.

Once the wireframe was drawn, it took me less than an hour to recreate the basemesh. The only thing left to do was to set up the Polygroups before starting the final sculpt.

Here’s a turntable of the final basemesh after the retopology:

With the brand new topology, the final sculpt was pure pleasure. With a dozen SubTools and a polycount of less than two million, I still didn’t go too much into detail at this stage. This was for two reasons: to have relatively light SubTools that speed up the TransPose Master process, and because I wanted to wait for the character to be in his final pose to work on folds and micro details.

Since the first weeks of the challenge, I regularly took short breaks to test different poses. In addition to helping me refine my idea for the final pose, this allowed me to train myself in deforming the cape with TransPose, starting from a simple 3D plane.

Before tackling the final pose, I activated “poseable symmetry” in the Transform palette in order to be able to symmetrically paint details and colors onto the posed model.

Here is a video of the posing process done with the help of TransPose Master:

To be able to quickly apply colors and materials to the different sections of the costume (Fabric, Leather, etc…) I painted selection masks in black and white, then color-to-texture transferred the PolyPaint onto a set of automatic UVs generated in ZBrush.

Those selection-set textures let me get back to the complex masks at any time, just by applying those textures onto the object and using “Mask By Intensity” in the Tool>Masking menu.

The coloring was done with PolyPaint. Before tackling the colors I usually create a reference sheet in Photoshop, including photos or illustrations using the kind of color palettes I am looking for. I imported this PSD as a background into ZBrush, with the “Flat Color” material selected. This allows me to not only have my references in front of my eyes all the time once I start the PolyPainting, but also to quickly pick a color I am interested in by placing my cursor over the canvas and using the shortcut “c”.

Captain Hornet’s yellow fabric uses a modified version of the MatCap “Pewter”, created by Olivier Kaeser and available in the ZBrush Download Center. For the eyes I used the MatCap “Boing” created by Gerson Klein. Thanks guys for these great materials!

Having done some tests in Projection Master with the architectural modelling technique of Sebastien Legrain, I realised that I would not be able to obtain the mixture of right angles and curves for the cornice that I wanted to use as my character’s pedestal.

Therefore, I decided on starting from a SweepProfile3D primitive, reducing its horizontal subdivisions down to 4 and increasing its vertical subdivisions to the max. By editing the Sweep profile curve I obtained the result I was looking for. All that was left to do was to add some vertical loops through the Edge Loop option in the Tool>Geometry menu to make the polygons less rectangular.

For the moonlight render the talented Brett Sinclair suggested to me, I rendered out different passes in ZBrush, then used Photoshop for the compositing and the sky. I used ZAppLink to save the camera’s position in between ZBrush sessions, and to export the scene’s alpha channel. The MRGBZGrabber tool allowed me to extract the ZDepth map by exporting the resulting alpha. After that, I did two renders with one unique white light in each (one for the moonlight, one for the city lights coming from below) and a grey material applied to my model so that I could use them as masks for the lightning in Photoshop later on.

All I had left to do was to make a render of my model in color and with its materials, after which I had all the necessary layers to compose my final image in Photoshop.

Here is the turntable of the final model entirely rendered in ZBrush:

Thanks for reading this making-of, and don’t hesitate to ask any questions if anything seems unclear. Thanks to Pixologic for organising this amazing contest, and to all the participants that created such inspiring characters. Finally, thanks a lot to all those that supported me and voted for Captain Hornet!

We would like to thank Adrien for taking the time to put this article together. Watch over the next few weeks as we bring you the other top entries, counting down to the Grand Prize winner. There’s still an epic amount of great info on the way!

You can also read more about Adrien himself in his previous interview, which was done shortly after his third place win in last year’s Dominance War III competition. 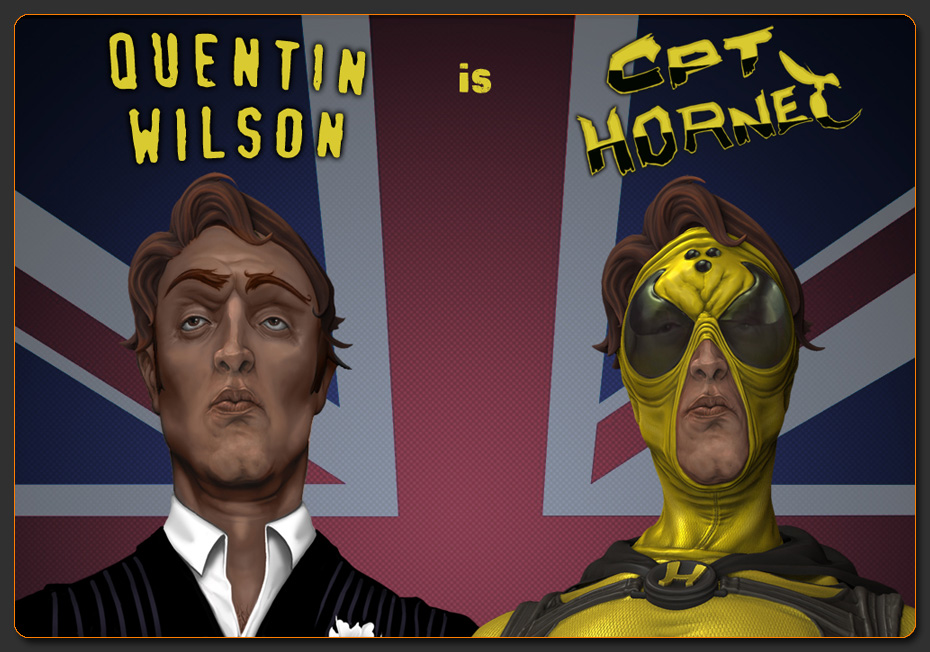 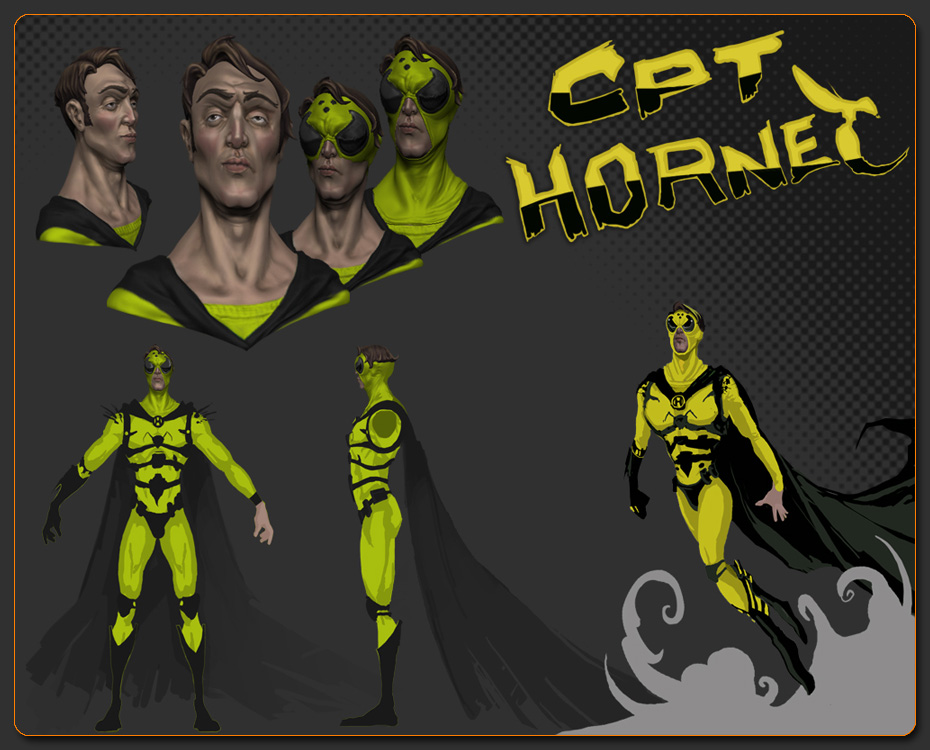 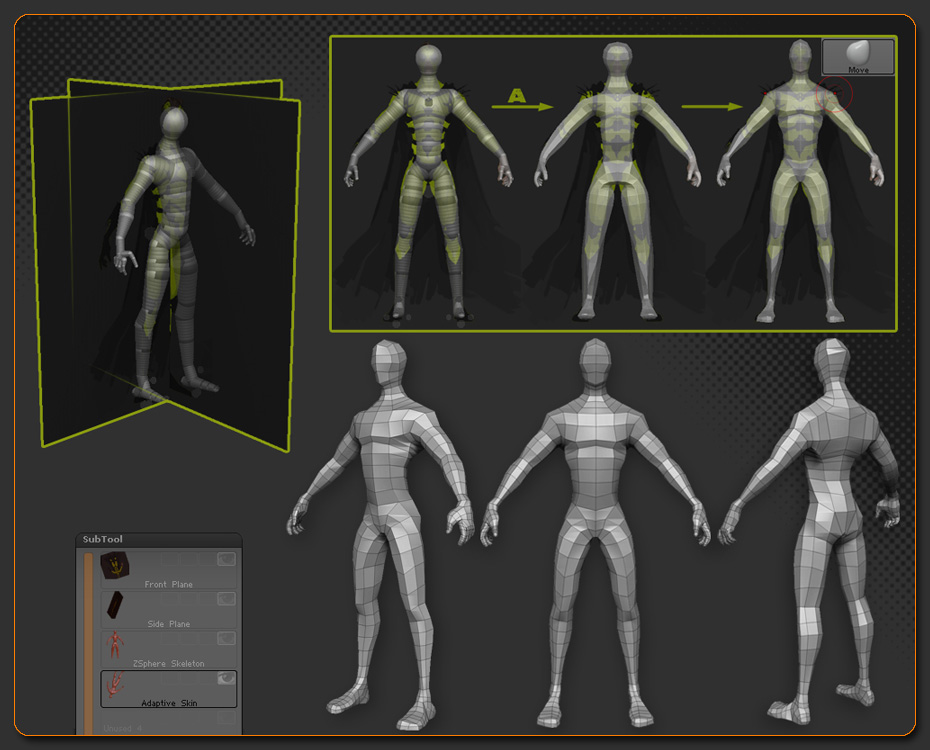 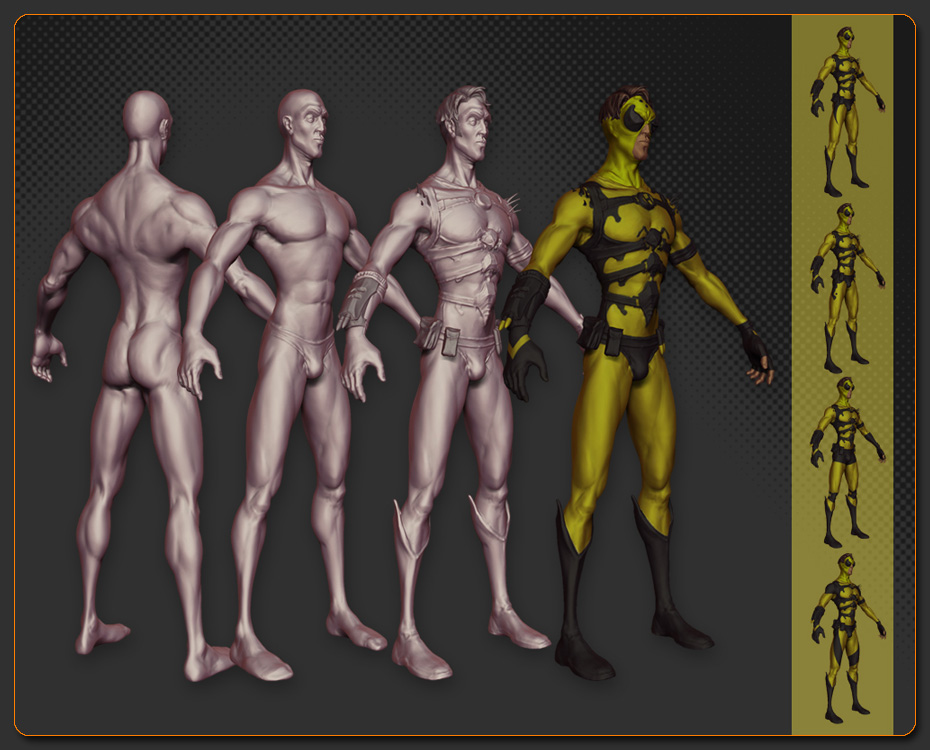 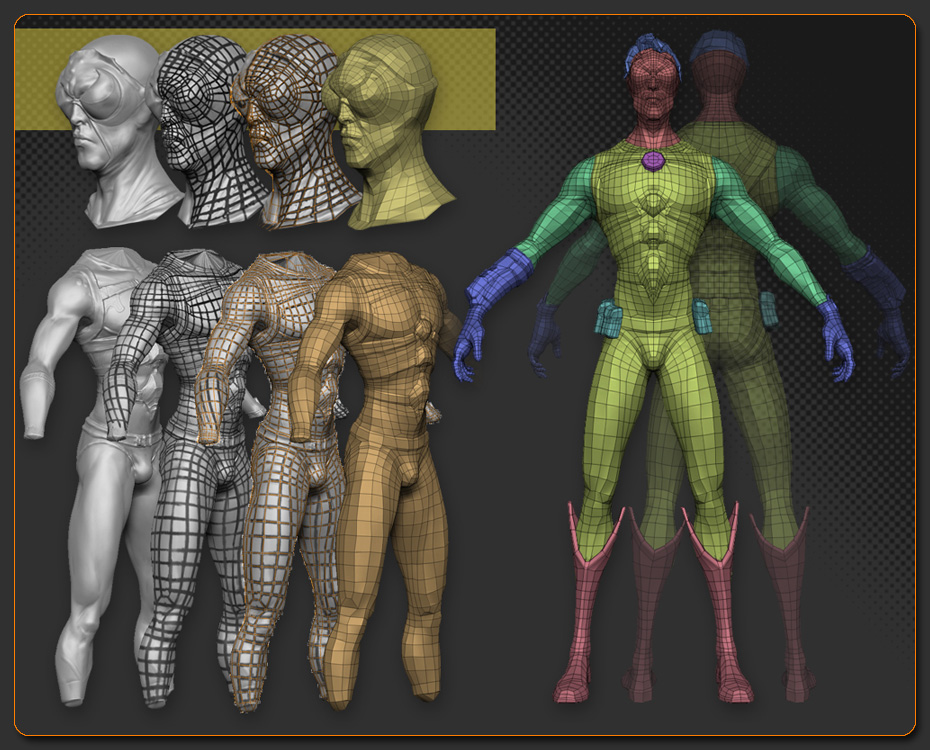 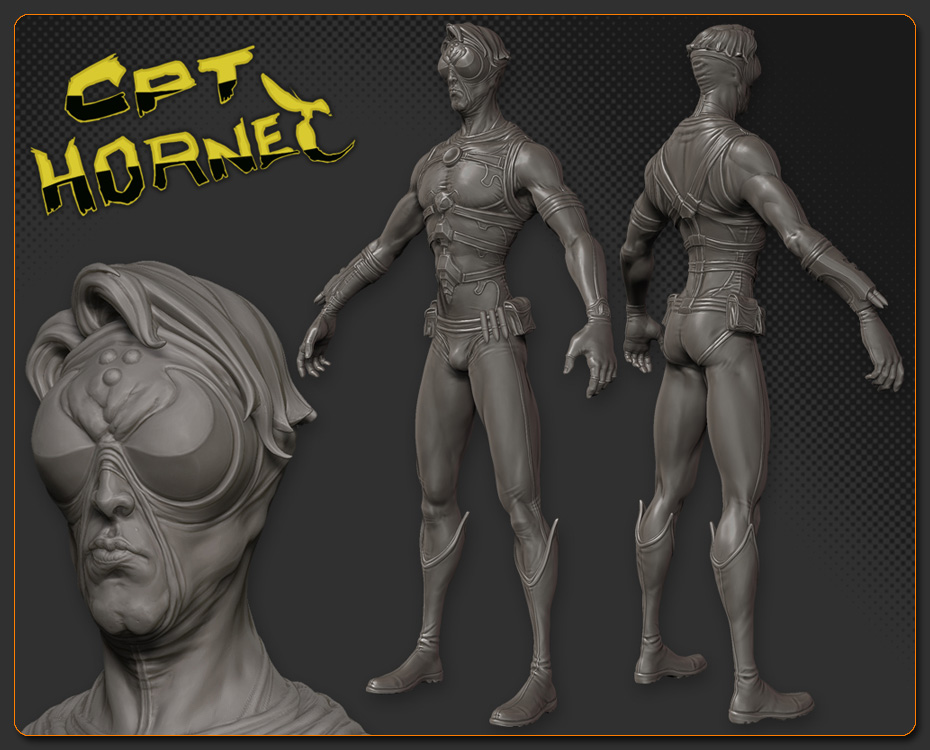 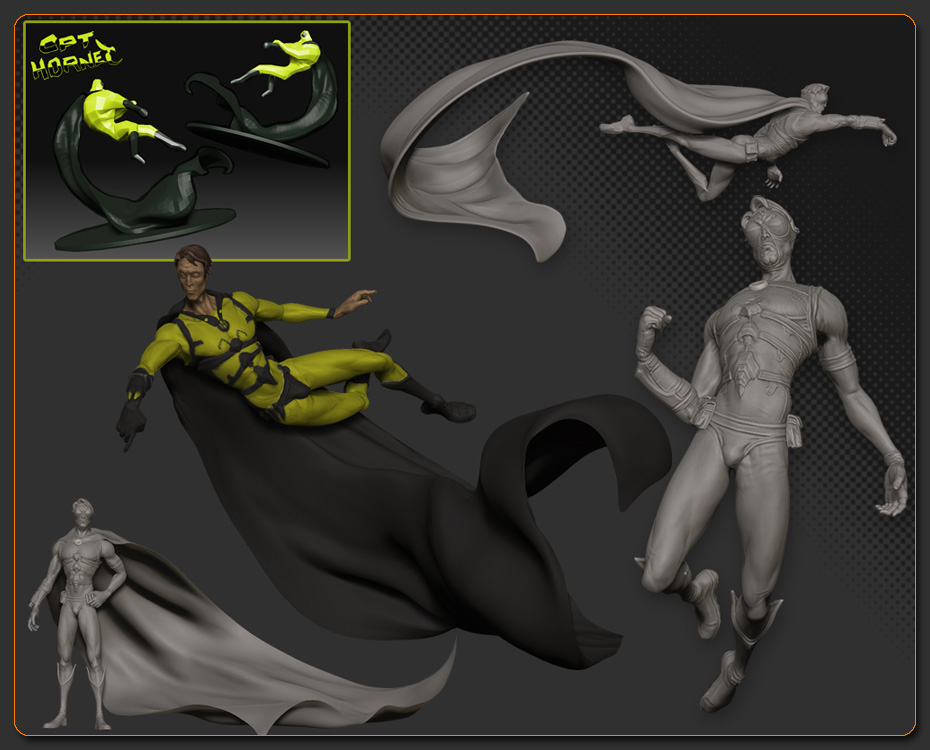 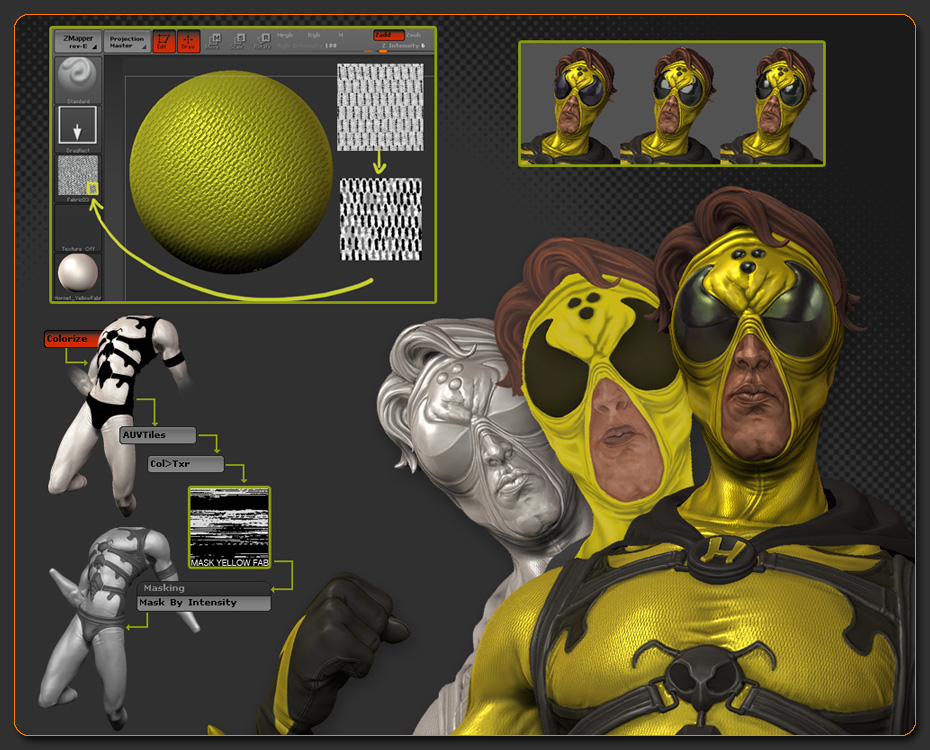 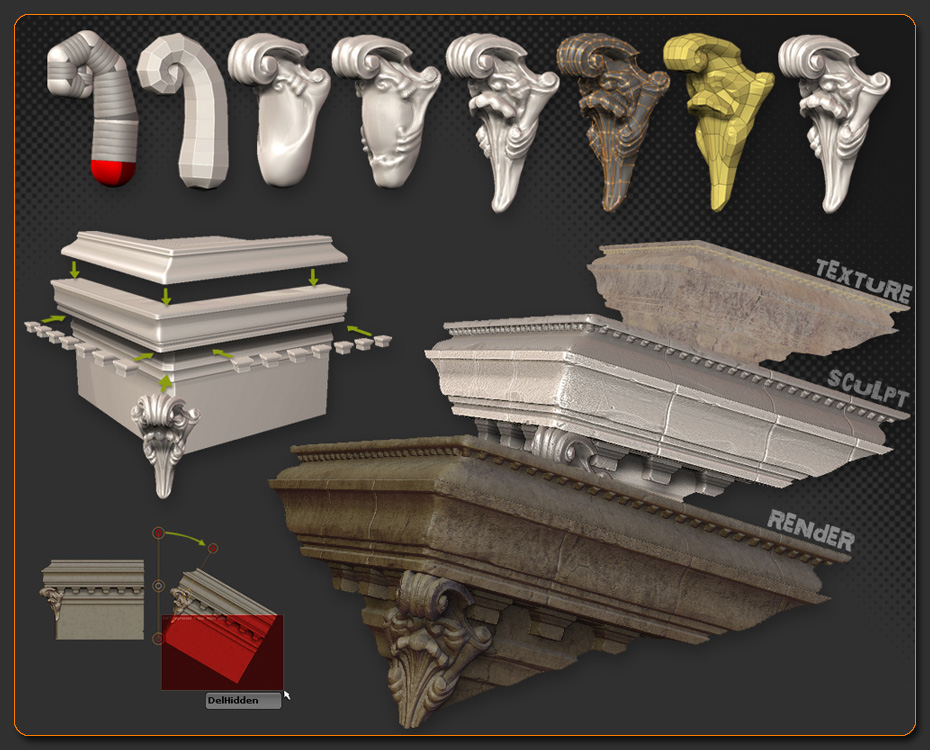 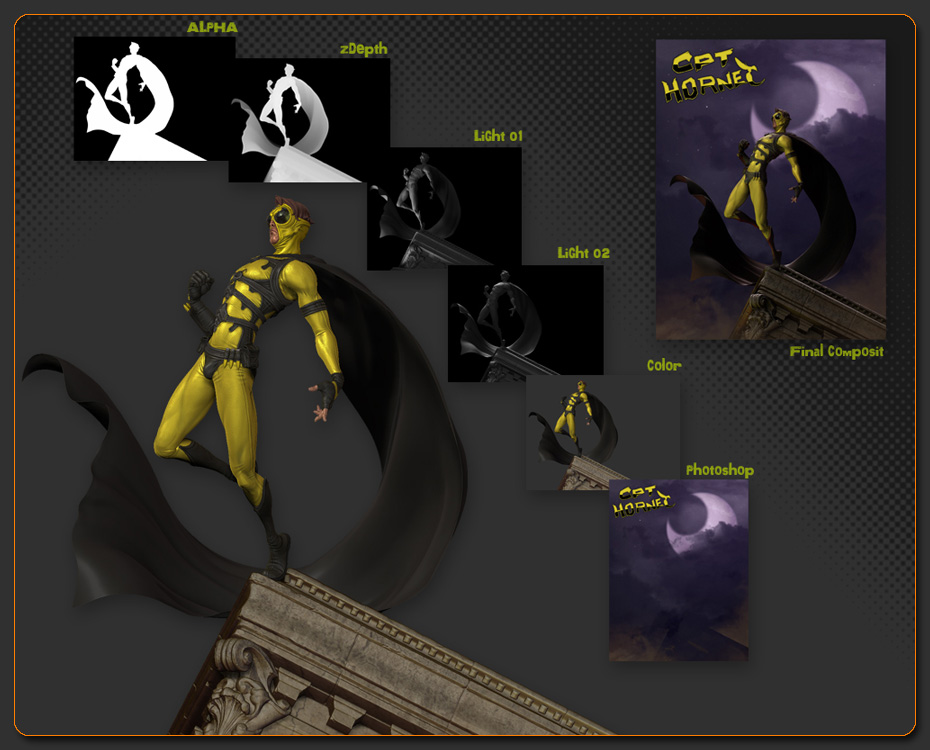 Wonderful! Thanks so much for posting this Making of!
I had been wondering everytime I saw the image about the texture of the suit
and how it was done.

Do you or anyone have a link or more info on: “I used ZAppLink to save the camera’s position in between ZBrush sessions”

Curious about how to save the camera position this way.

Thanks for the breakdown!

Awesome making of for an awesome character! Thanks so much for sharing!

He got my vote. Nuff said

Very creative work on the design and the techniques used.
Thanks for the article!

It´s really amazing to see this making of! Captain Hornet is super cool, and
I love everything about him!

And every time I see this fantastic pedestal I think – WHOA !
Great to see this kind of stuff!
Many, many thanks for the Video!
I really learned a lof from you!
And guess what, I still kow what´s “specular”. Yep, I didn´t forget it.

Once again, many compliments on your modeling+texturing work -
You did an awesome job!

Very nice work !
Thanks for sharing =)

A wonderful making of for a great entry!
Thanks for sharing! :D

Hi Adrien! I loved following the development of the Captain during the contest. It’s great to see this awesome overview! So, a well deserved congrats on top row, and 5 stars from me!

Really, really cool stuff.
Thanks so much for spending the time to document this process and share it with us all.
Excellent artwork and great explanations, this thread is now in my bookmarks!

Really great modeling! Thanks for sharing your techniques.

Such a good surprise when I opened ZBC today!
Thank you so much to the Pixologic team for setting this up, and to everyone here for the kind words and support during the contest. I had a lot of fun working on this character, I really did.

Dman3d: If you have Zapplink installed, go to Document/Zapplink Properties and clic the Cust1 or Cust2 button when you have the camera angle you would like to save. Then simply use the “save views” button, and you will be able to reload this camera by opening this .vws file in your next ZBrush sessions.

Captain Sensible, Moni-Poroni: Thanks a lot guys! it was a real pleasure to do this contest with people like you!!!

Thanks again everyone! And have a great week-end!

You make it look so easy, nice work.

You’ve made the Amazing piece since the concept work! Excellent in every way!

Thank you for sharing your technique!

Great to see some of your techniques Adrien! I’m a big fan of both Cap Hornet and you. Nice job man.

Great work and an amazing style!

A perfect craft performance from the beginning to the end!