Been some time since I posted (or did) any work. Here’s something I’ve been working on. Sculpted and rendered in 4r2. I’m planning to print this model at 1/4 or 1/6 scale so I’d appreciate if anyone can recommend a good place to do this. Thanks for looking!

reminds me of Guyver

Brain tissue out in the open air… Can imagine what happens if he touch it, he would spasm and say weird words

Awesome… Go to Shapeways.com … they are the cheapest i have found and very user friendly

Great bust. Like the sculpt allot. Has something of Takeya. Thumbs up!

Sweet design Dominic, how did you use the new features in zbrush? be great to hear what your workflow is if you tried the new dyna mesh? also what are your favourite brushes to use?
Keep us updated and keep inspiring man

Beautiful sculpt Dom, and very nice material!
Regarding printing I can recommend Lightbeam 3D. They printed my creature and base and even though it was in a quite small scale the details showed through.
You can view a sample of the print in this thread.
As a 1/4 or 1/6 scale the print should even get better.
Hope that helps

was wondering if you have any break down on how you made ts piece?

Very cool. Love the treatment you’ve got on the back.

Cool. Love the muscle detail. Good luck with the prints. I have no experience in that field, though I am interested myself.

Habib- thanks man. yeah I’m a huge fan of guyver!

Cheshire- i’ve gotten in touch with Ownage. I’ve seen some of the prints from shapeways and they look pretty bad in quality.

locusta- thanks dude. takeya is my idol, i love a lot of the work he does… especially his takes on kamen rider.

braseN- Hmm i didn’t get to use any of the new features from 4r2 because this model is pretty old. I find the dynamesh feature interesting, that said, I have tried building a body from a sphere and it kind of defeats the purpose if you have a nice basemesh on hand. It’s something I’m going to play around more with. I used the claybrush for building inital shapes and the dam brush for cutting and form brush for volume tweaks at the end.

Etchelion- thanks for the recommendation. i’ll get in touch with Scott, looks like they do good work. that demon print you did looks awesome!

mrwednesday- thanks! I started off with some zspheres, at first i only planned on doing the head and neck but later on decided to work on his torso too. There isn’t much technicality to it, just straight forward sculpting… build forms first at lower subd and work on detailing much later. For posing, just have to keep things assymetrical and give it some nice flow. The design process was the biggest learning process for me.

poda- i should get pics soon I hope. I’ll post them here. Thanks.

So I’ve sent in this piece for a 4 inch print just to take a look at the forms and how everything looks, then I’ll make any changes needed and eventually, plan to make a 6-7 inch bust of this (pending price of course, seems pricey so far :P) I’ll update this thread when I get some pics. Thanks for looking.

> Etchelion- thanks for the recommendation. i’ll get in touch with Scott, looks like they do good work. that demon print you did looks awesome!

Thanks man.
Scott is a very friendly person, I’m sure you’ll arrive at an arrangement.

Cheshire_Monkey, I’ve been in contact with Ownage and I must say it’s a pleasure when you are working with someone who is as passionate about the whole 3d printing deal as you are.

Etchelion- I decided to give Ownage a try. The test print is on it’s way back to me. Unfortunately, some of the details are lost due to the size of the print. Still have a lot to learn about this whole 3d printing business. Pictures once I have the bust in my hands!

Yeah, very cool.
You’re right, as affordable 3D printing is quite new, it’s not really evident which way to go. I’m looking forward to see the pics of the final print.

Hey all, I finally got this bust printed. Here are some pics, the bust is a little over 4 inches tall. There’s a shot of it in my hand too to give you guys a sense of how big this thing is. I have fairly long fingers and the bust feels like a nice size, I lost quite a bit of detail due to the size and might consider printing a larger one to capture more of the details in my original zbrush sculpt. Thanks for looking. 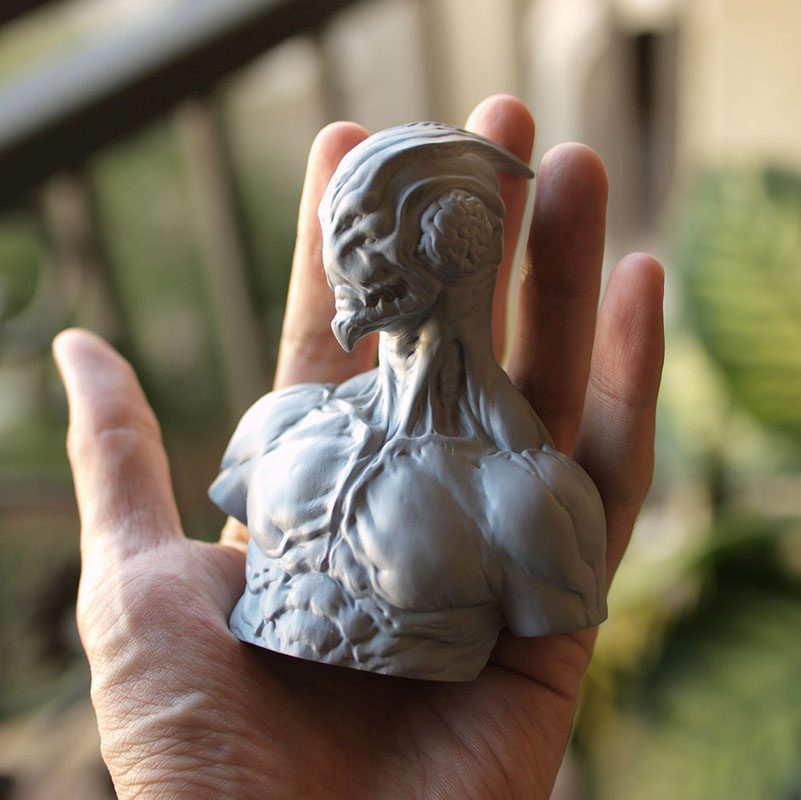 looks dope dude, love the back. Teh print came out really nice, i hope to be doing some printing soon.

The sculpt is great and print came out awesome. Congrats. Your zbrush render came out great too… Any chance you can post the render/material settings you used?