Big thanks to Pixologic for all the hard work to make this update amazing! it was a lot of fun to discover the new features and be part of the team.

My name is Marco Menco and I work in the film industry as Creature Artist.
Here is my new website in case you guys want to know more about me:
marcomenco.com

This is a character I’ve develop for my Siggraph2011 presentation at the Pixologic booth. I used the new rendering features and the layering system. I use ZBrush for most of the concept work that I do and this new render system is really boosting the speed of creation! I’m also working on a facial animation on this same character that I might post in the near future. In the mean time I hope you’ll like the renders I did using ZBrush.

this is the render straight from zbrush without post. 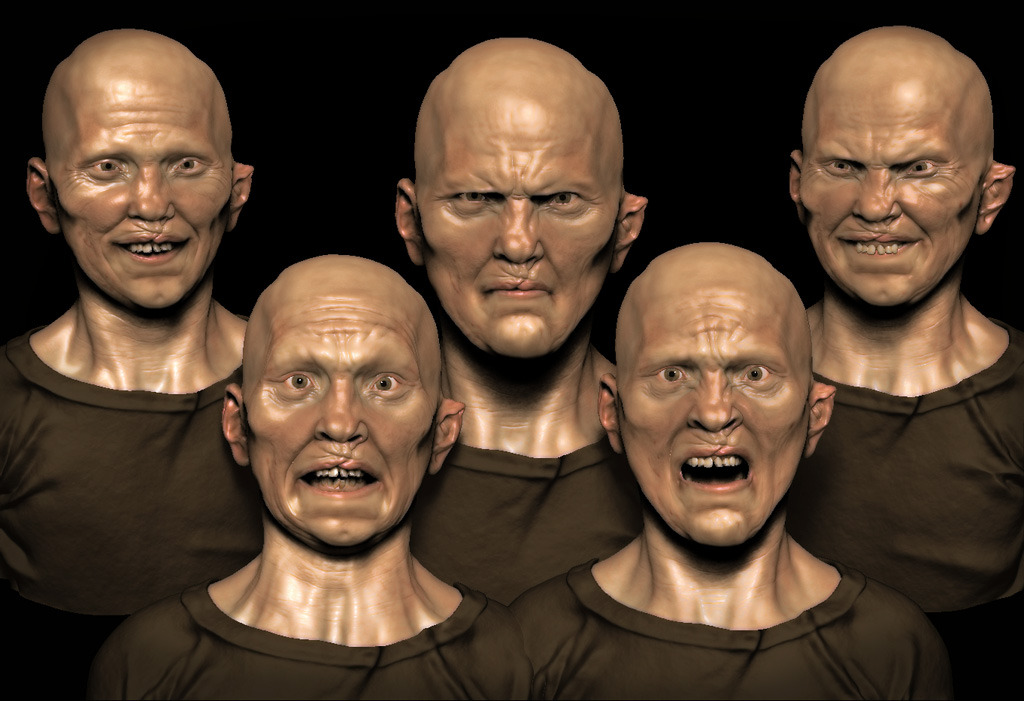 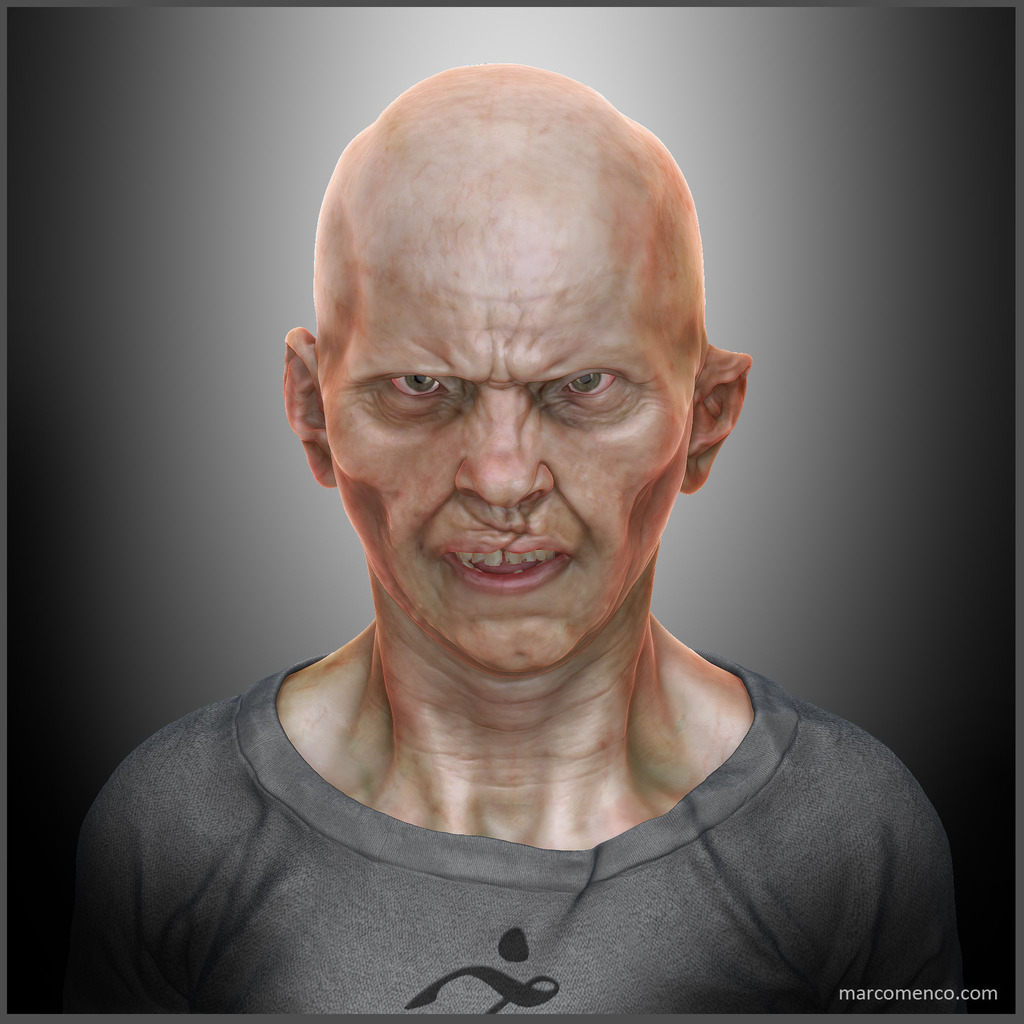 Hey Marco! You should post your videos of the morphing! Great stuff

hey guys thanks! Marco, I wanted to but I was going to got for the rendered version that I’m doing with a friend of mine.
ok I’m posting the WIP movies

hey! my name is Marco too…
the world is very little

lol nice to meet you Marco The Third

very nice animation! is it all blendshapes in zbrush (for teh blue render) or is it animated after rigging?
would love to see your process!

Hey guys, thanks for the feedback.

I sculpted everything you see there in ZBrush and store every muscle deformation in zbrush layers (see attachment)
So my layers would be called something like “zygoMajor”, “risorious”, “levatorLabiiSup”, “depressorLabiiInf” and so on…
Then I exported each of those layers in obj, picking the 4th subdivision on the 5s that I had so I could already see some of the details happening throughout the animation (before rendering).
Once my library was ready I would also save 3 displacement maps:

Once I had all this ready, I went into maya and use a script we have here at Image Engine to detect all the differences between ovelapping target shapes
and neutral pose. This tool would bake alpha maps that would be black on the UVs that were identical (between targets and neutral) and white on the moved UVs.
These maps also were going to be connected to the blendShape nodes and used to reveal parts of the displacement maps created from ZBrush.

The rig is a simple use of set driven keys, and I animated the controllers so that I could get more than one shape to react to each controller’s position in space.
The result is a more realistic flow of the deformations.

I’m attaching some of the pages of my Siggraph presentation so you get an idea of my workflow in ZBrush. Hope this helps 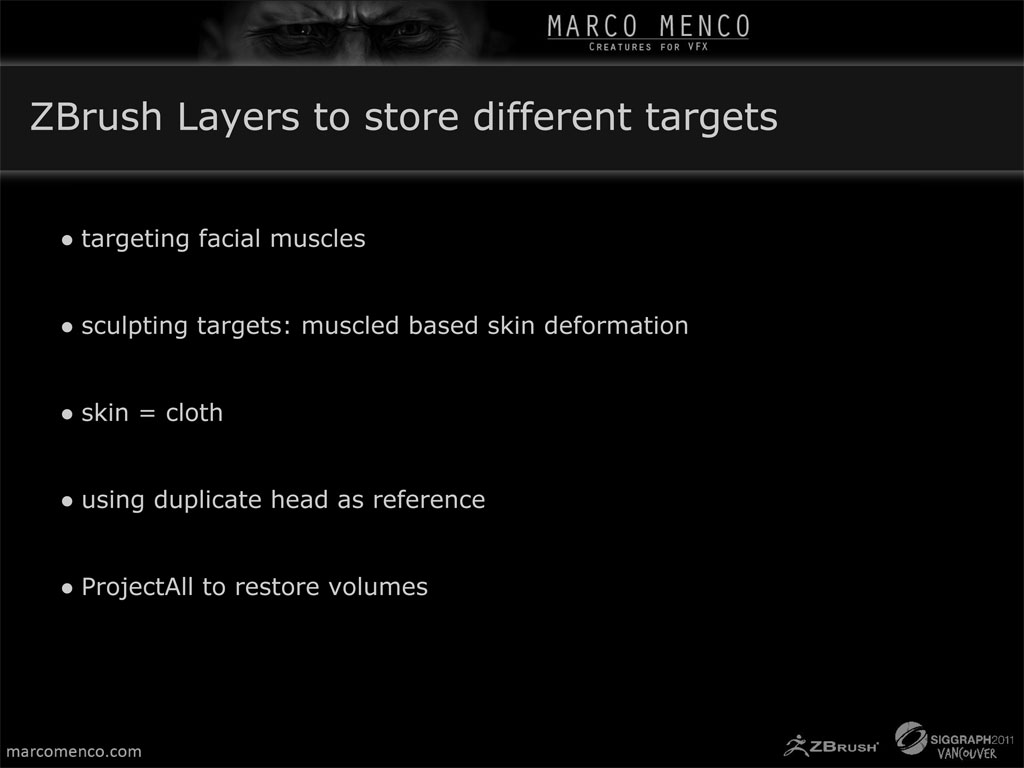 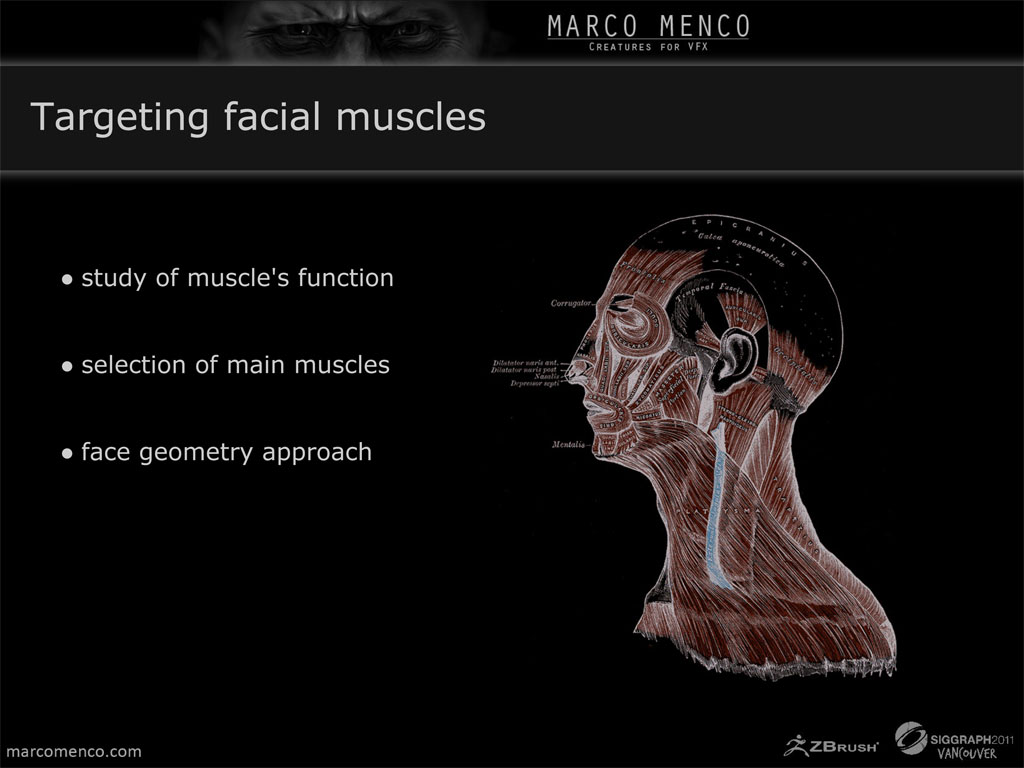 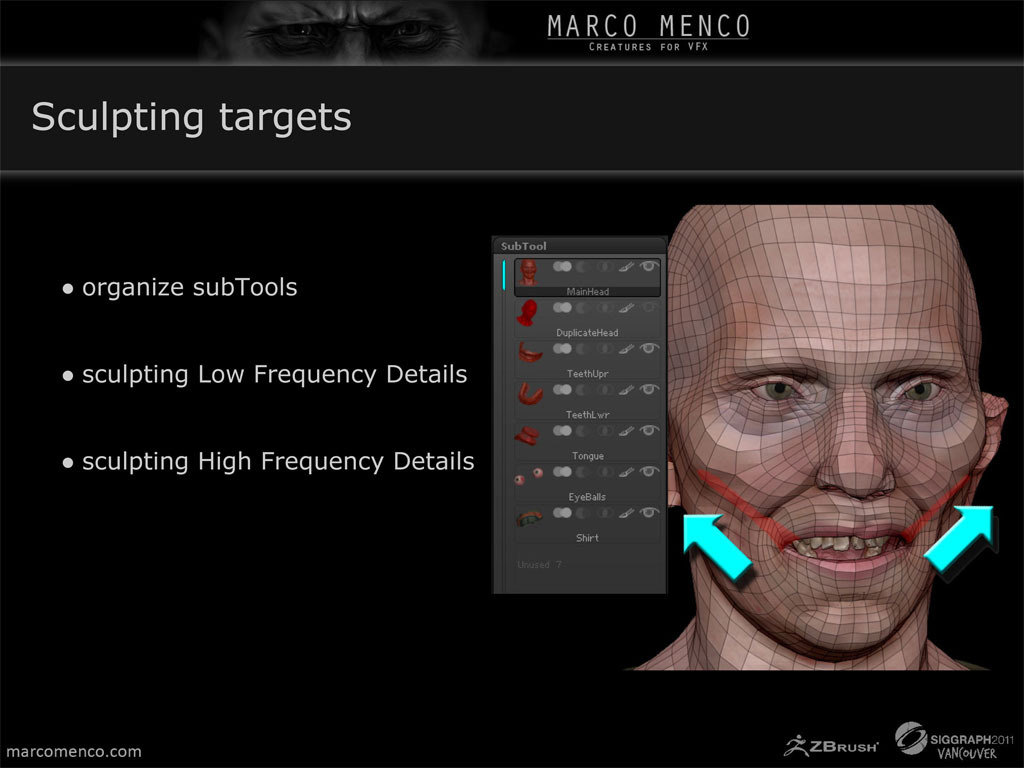 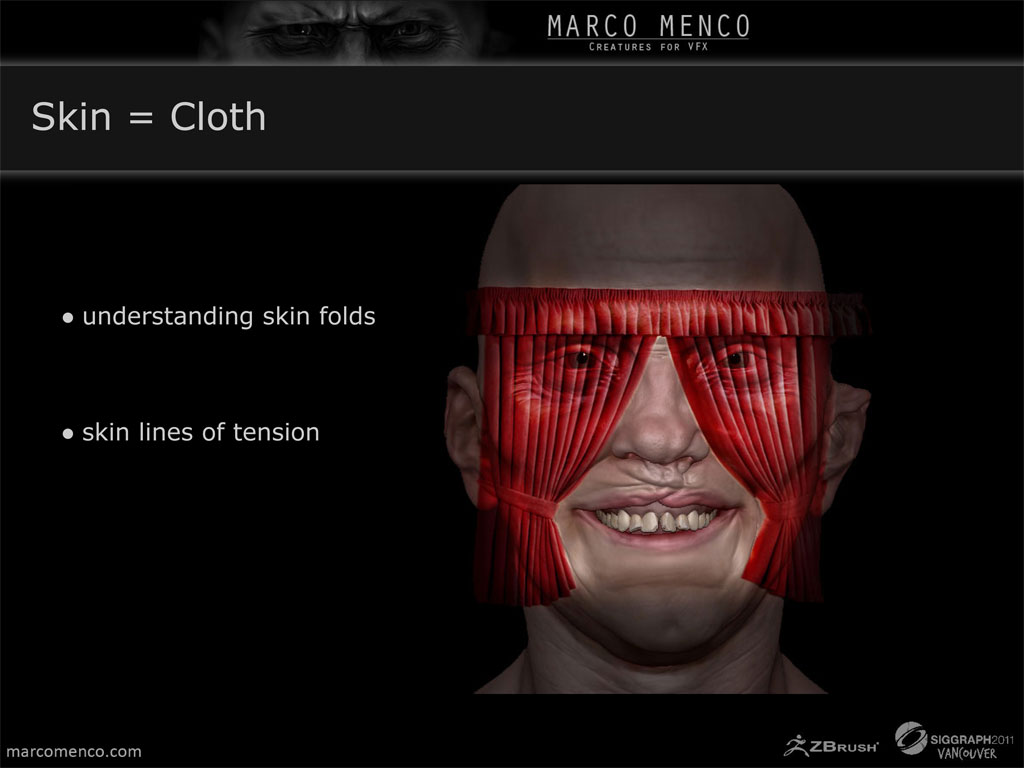 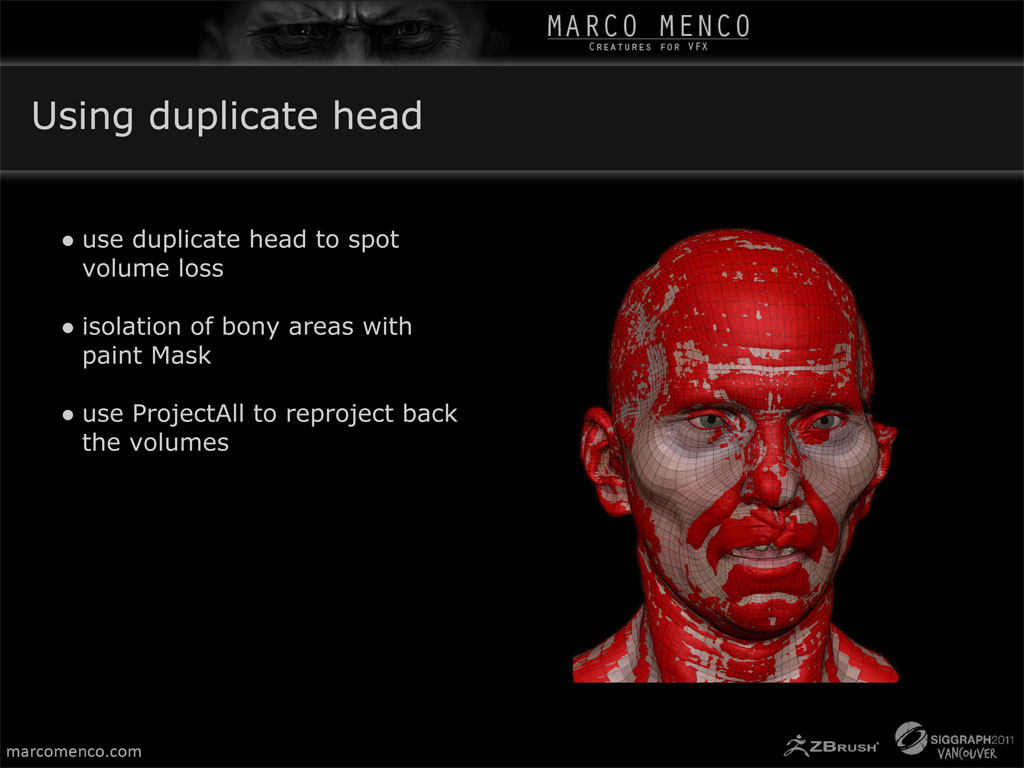 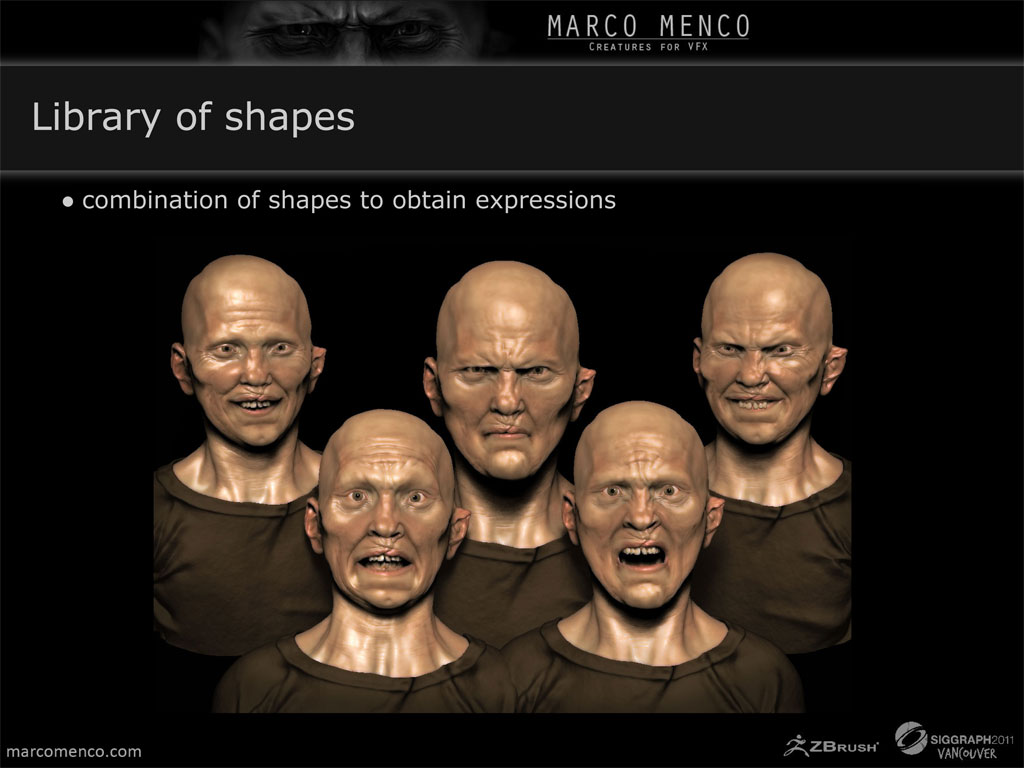 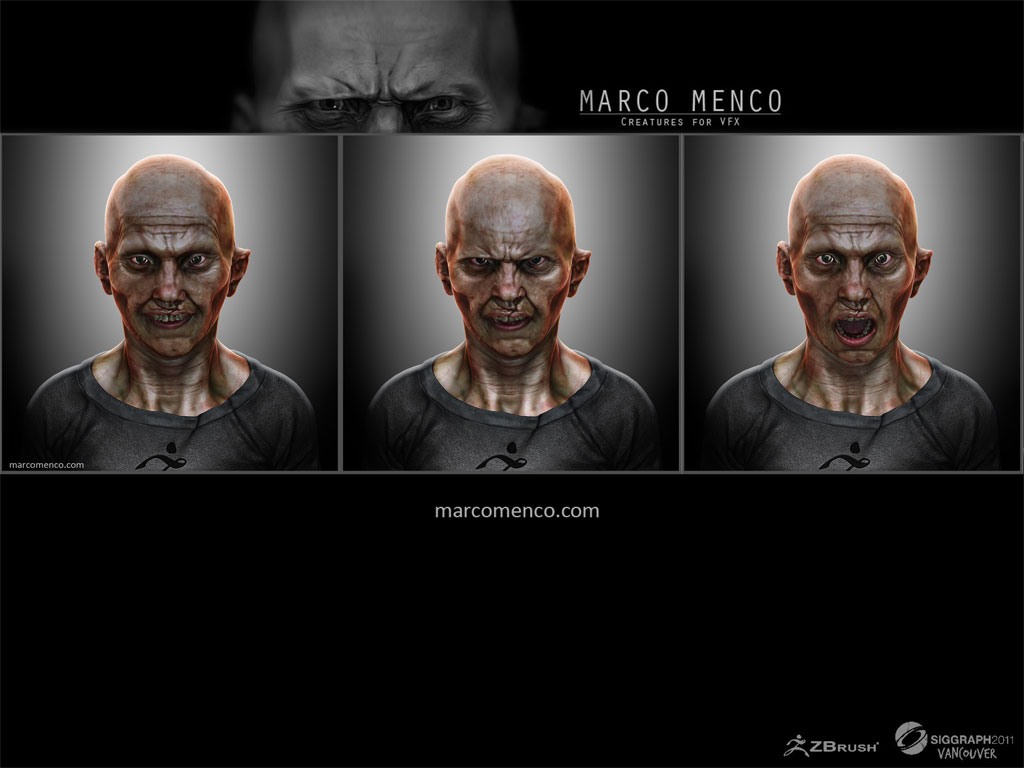 Dude! This presentation is awesomely interesting!!!

What did you use like facial muscle deformation reference? Did you use Artnatomy (http://www.artnatomia.net/uk/artnatomiaIng.html) or something else?

Are you using the negative motion disp-maps a lot or you just generate it as a formality?

How is the correction disp-map (the 3rd one) useful? I’m having difficulty understanding it’s pupose.

I saw someone baking to normal map a neutral face, put an expression on the face, baking another normal map and, with Photoshop, subtracting the expression face map with the neutral face map to create a normal map that can be use as a “additive map” to assist the facial rig. I guess your process is similar in a way right?

thanks a lot for sharign this workflow, it answers some of the questions, but i think it also calls for a full Video tutorial haha

woudl be interesting to know what are your references too …so basicly you use a total of 3 blendshapes, and that tool to overlay only areas that actually have a difference ?
sounds very interesting, do you really need that extra step?
im very interested in testing somehting similar, but not sure how to approach it outside of zbrush (the setup, how those are linked to he bones etc…)
A

Hey guys sorry for the late reply.
I hope this answers to both you guys’ questions.
I haven’t used any specific reference. Having a mirror and a human skull on my desk most of the time has been of great use

I just purely analize the machanics under a physical and anatomical point of view, adding some artistic liberty.
I always try to devide my observation time from my work time. I basically try not to use reference for as long as I can.
Most important is to understand before observing I think. So take in consideration what DaVinci said about muscles:
muscles work as ropes and pullies. Take the fact that they always pull and never push and that skin more or less acts like cloth sliding over bones and then you’re done!
The idea of imagining skin to behave like curtains really helped me to also make sure I would keep the volumes. Once the UVs were been moved around
I would use “Project All” on a duplicate geometry of the head which was the best tool for that purpose (I will make a video of that).
This to underline the importance of using ZBrush for this process. I did this kind of work before in maya and it becomes tedious and tricky. The use of subtools really makes it super fast.
Maps are set in a similar way, but it’s how you set the shader that does the magic. Instead of using pre-subtracted maps, I use 3 displacement maps baked out of zbrush
from extreme expressions (positive or negative or corrective).
It’s the alpha maps that are going to be applied to the transparency of one displacement map comped onto the other. If you have the displacement maps one over another as layers in photoshop,
you can use alpha maps to reveal this or that area of the maps. The video you saw it was rendered in 3Delight which has a very similar layering system as photoshop has.
I’m creating the shader for Vray now so I’m going to post it as soon as I’m done with the render in Vray.
So it’s the shader that is connects the alpha maps to the blendshapes. When a blendshape goes from 0 to 1, the value of the alpha goes from 0 to 1.
Btw, with positive, negative and corrective I intend to say that the morphing motions are the ones to be positive and negative and so on. The shapes are a lot not only three. The displacement maps are only three
because they are baked from more then one layers turned to 1.
Maps are so named after the layers. So I decided that my positive motion shapes would have been the ones that would have pulled the skin upwards.
Assigning a negative value to each of those layers would get me new shapes, that due to the nature of the linear interpolation of the morph would give me bad looking shapes.
So I resculpted those “negative” shapes storing them into new layers that I would actually recognize as those which would give me the negative motion. Funny enough the positive shapes are also
ones of positive emotions most of the time!
In few words if the brow goes up I consider it to be creating a positive motion; a negative motion would be given by the same brow going down.
Under an anatomical point of view, those muscles who would pull the brow up would give me a shape with details that would be totally different from the ones produced by
those muscles who pull the brow down. Basically one pisitive shape is not a mirrored negative shape.
This is because organic motion does not happen on a line. Ok too long. Hope it wasn’t boring.

Check also this thread, I posted some work I’ve done with my friend Justin Holt.
http://www.zbrushcentral.com/showthread.php?161471-Banjo-Man

Hey Marco thanks for taking time to give more intel! Let’s continue the discussion on your new thread

Hey dude I’d rather keep the discussion about zbrush here. The other thread will be only about that particular image.

thansk a lot for that insight, i think i got most of it, and hopefully, sharing your vid and your shader should fill the other gaps

thanks a bunch for that, looking forward for that

you shoudl consider making a DVD for eat 3d or gnomon or whatever, i’d be well up for that and spend the money on it

i have seen your presentation at siggraph at the pixologic booth, was really helpfull, glad to find your files reference here on the forum.
keep up the good work !