Hey fellow Zbrush Artists! I am extremely excited to be sharing with you some of the things I made during my time on the 4R2 beta testing team! It was my first time getting the privilege to work on such an awesome team, and test all the new features before release.

I spend much of my time in Zbrush, both for personal work and as a professional in the game industry. I’ve been working with Zbrush for a long time and they never cease to amaze and excite me with new tools and toys, taking the art to new levels.

And the same goes for this new update.

Dynamesh is a game changer for sure. It streamlines everything I do now throughout the entire pipeline. And with all the new control over our materials and lights, it is now even easier to get a beautiful render done in no time!

This first piece was done from a sphere using Dynamesh. I used Mesh Insert brushes to cut out negative spaces and add some larger shapes. The mechanical “eye” was done as a seperate subtool, also using Dynamesh and radial symmetry. Another really cool feature utilized here was Clay Polish. It cleaned up a lot of the rough edges for me, and was a great way to see some new shapes in my design!

The second piece I started ended up leading into the final character I did most of my beta testing with. I wanted some sort of alien, so this was the first pass. All Dynamesh and Mesh Insert brushes.

Working from the same original mesh, I just kept working with Dynamesh activated and pulled out the rest of his body. No subdivisions or retopology needed

I wasn’t feelin’ it, so I decided to change it up and see what this character felt like being more feminine.

So, once I was happy with the new direction, I then painted a mask over the body. The mask was used as an extraction for a new subtool. I used this new subtool with Dynamesh as well, and began blocking in some sort of tech outfit. Still no subdivisions needed yet, and only two separate meshes! I couldn’t believe how easy and fast it was to come up with dozens of different designs at this stage.

Once I settled on a design, I began using the Dynamesh generated outfit as a guide for mesh extractions. Each extraction later became a Dynamesh itself, and I noodled away on every plate and detail :]

And here she is! Run a polypaint pass over her, makes some custom materials and lightcaps. And in one render pass the images are complete! Normally I would take multiple renders from Zbrush into Photoshop and composite them together, but with the new BPR Render Filters in place I didn’t have to do any outside editing.

To get some of the smaller details, I used the new Surface Noise plugins that come installed with 4R2. I simply unwrapped those objects in Zbrush using UV Master, and I was then able to wrap tiled texture maps across the surface!

I look forward to seeing what the community comes up with using all these new features! And it will be very exciting to learn and grow even more as artists. Happy Zbrushing! 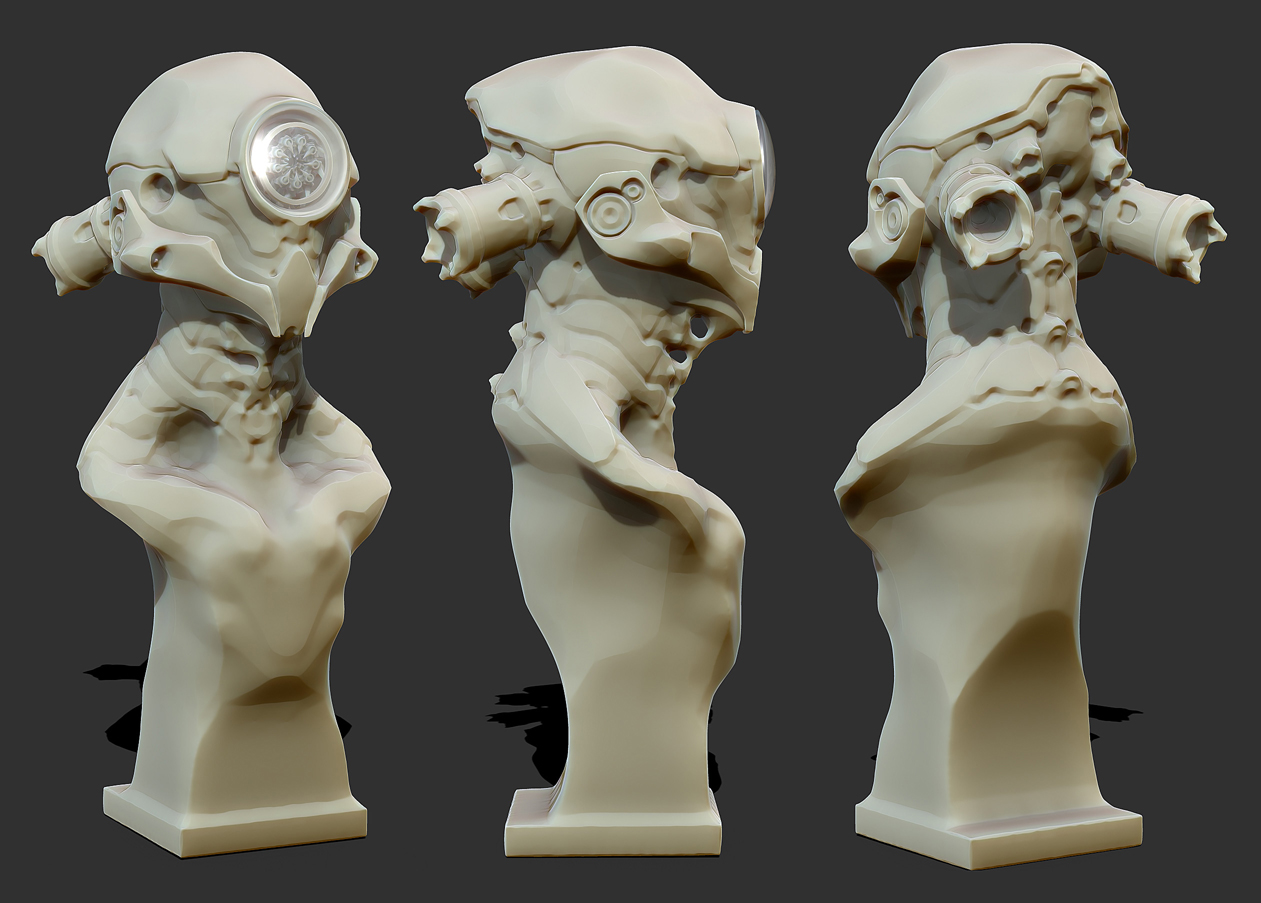 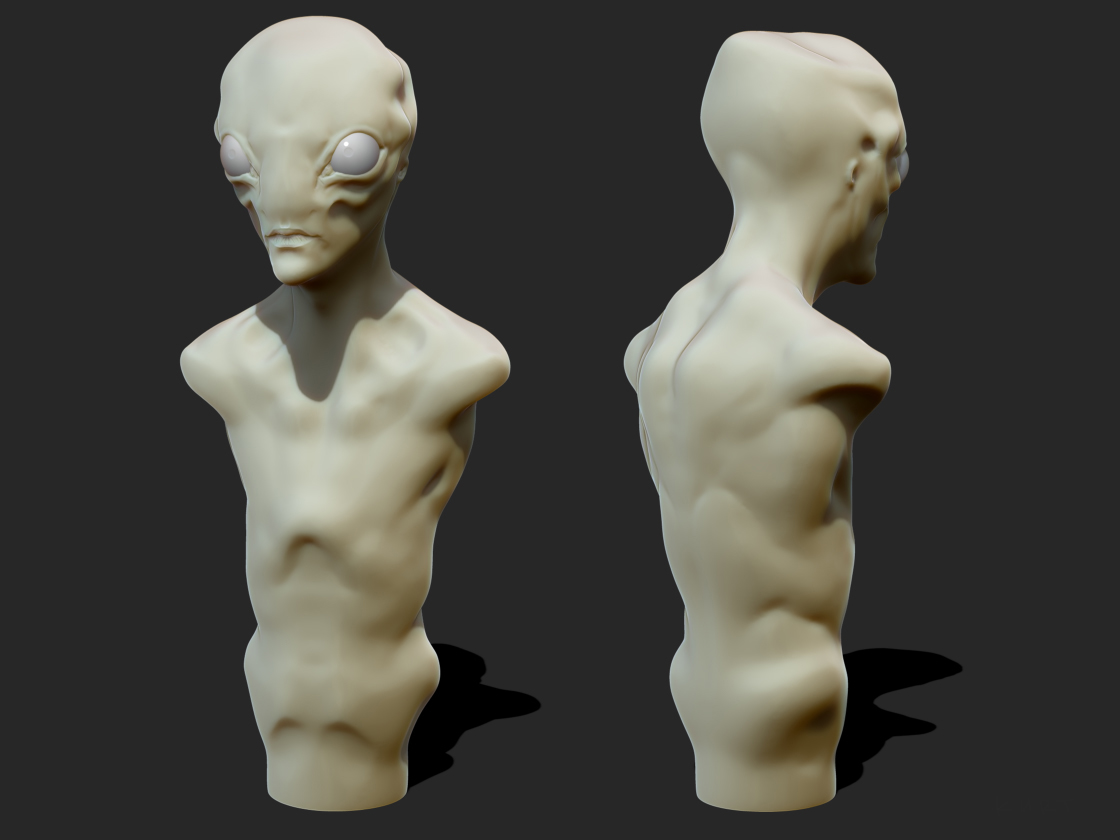 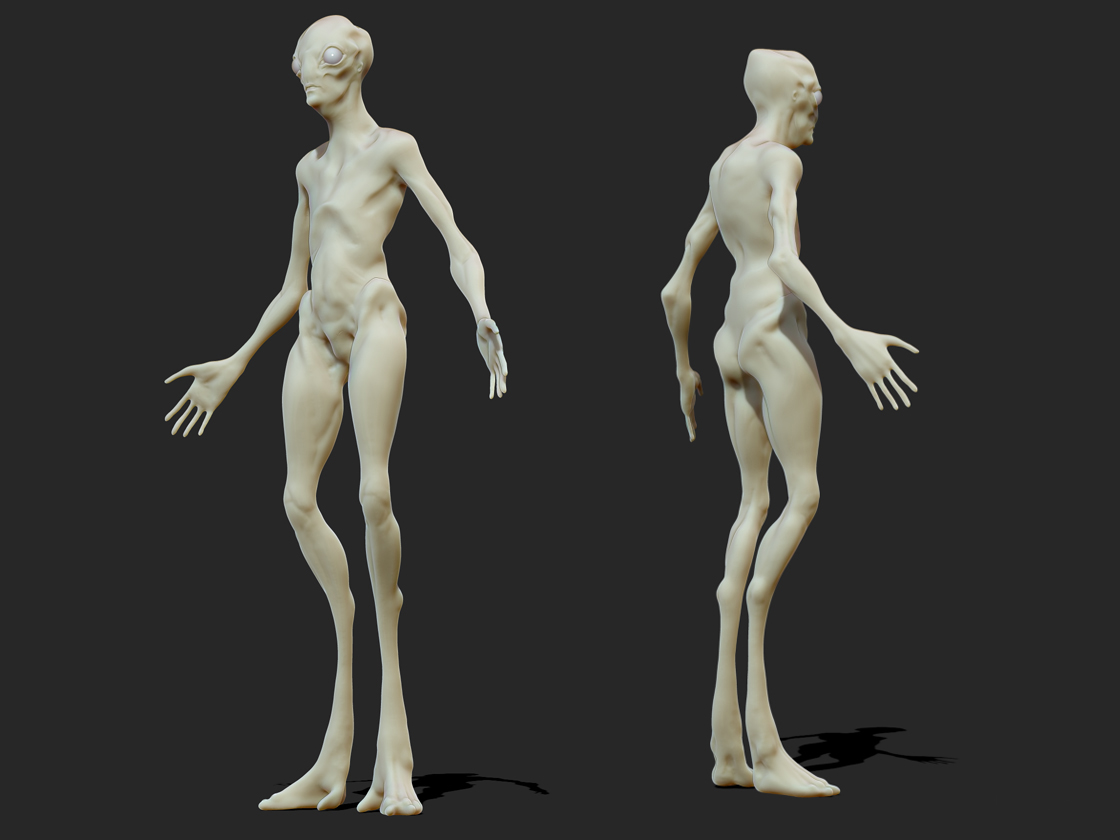 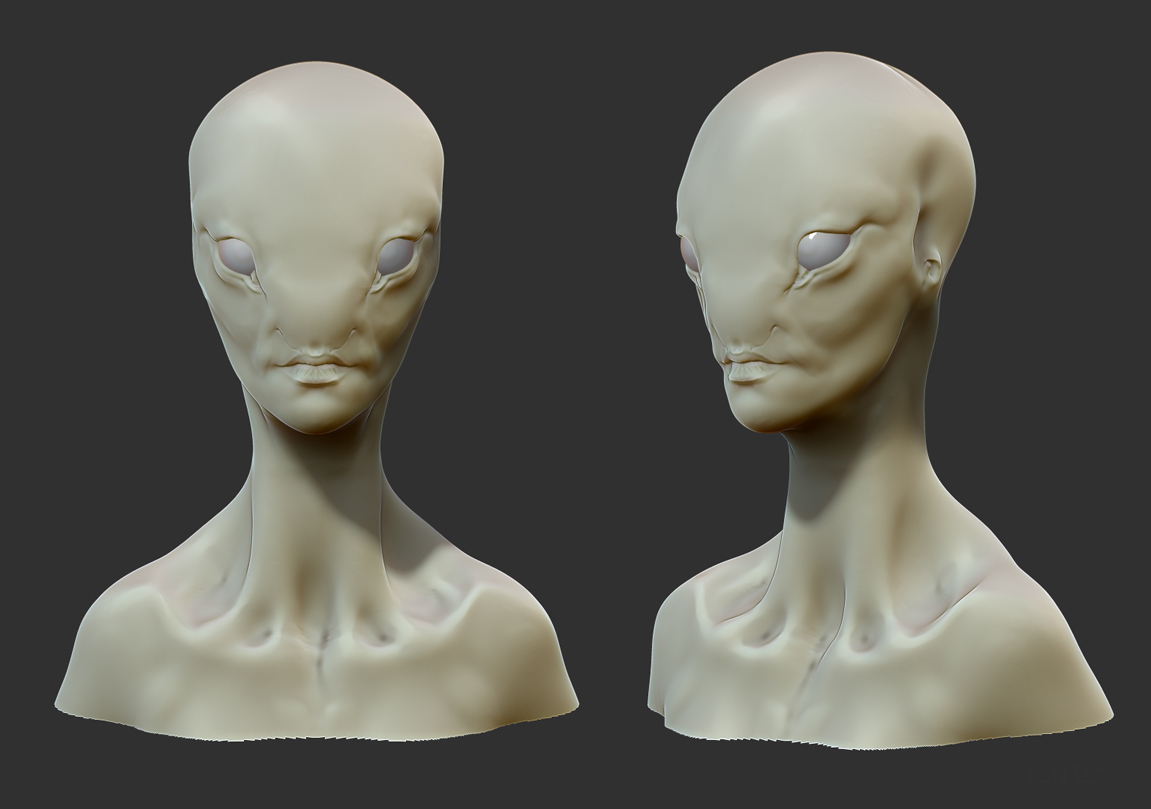 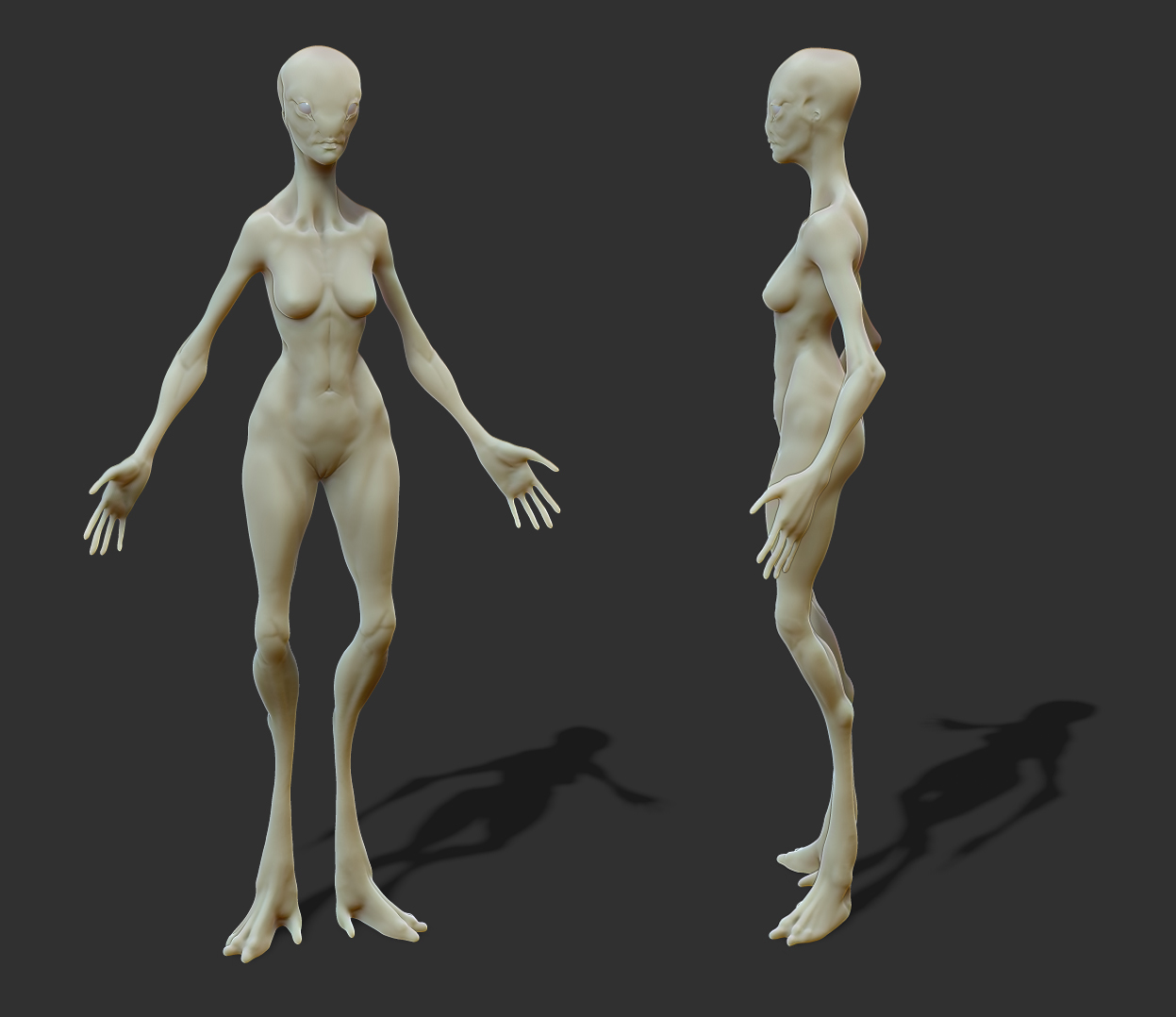 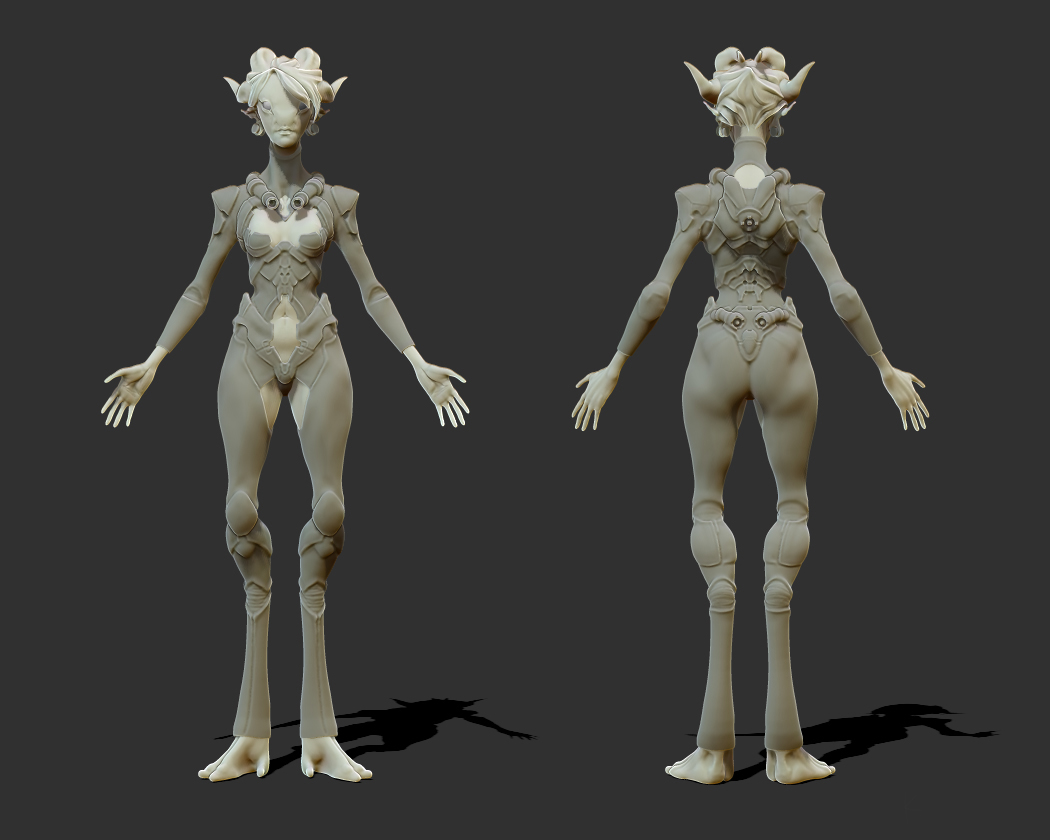 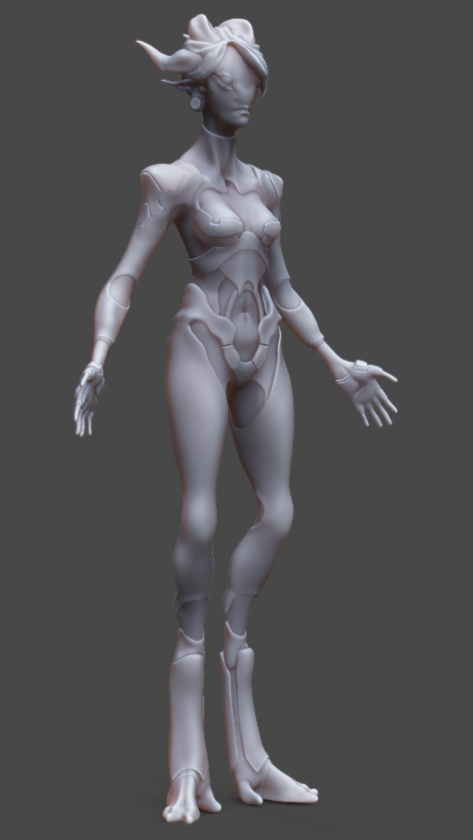 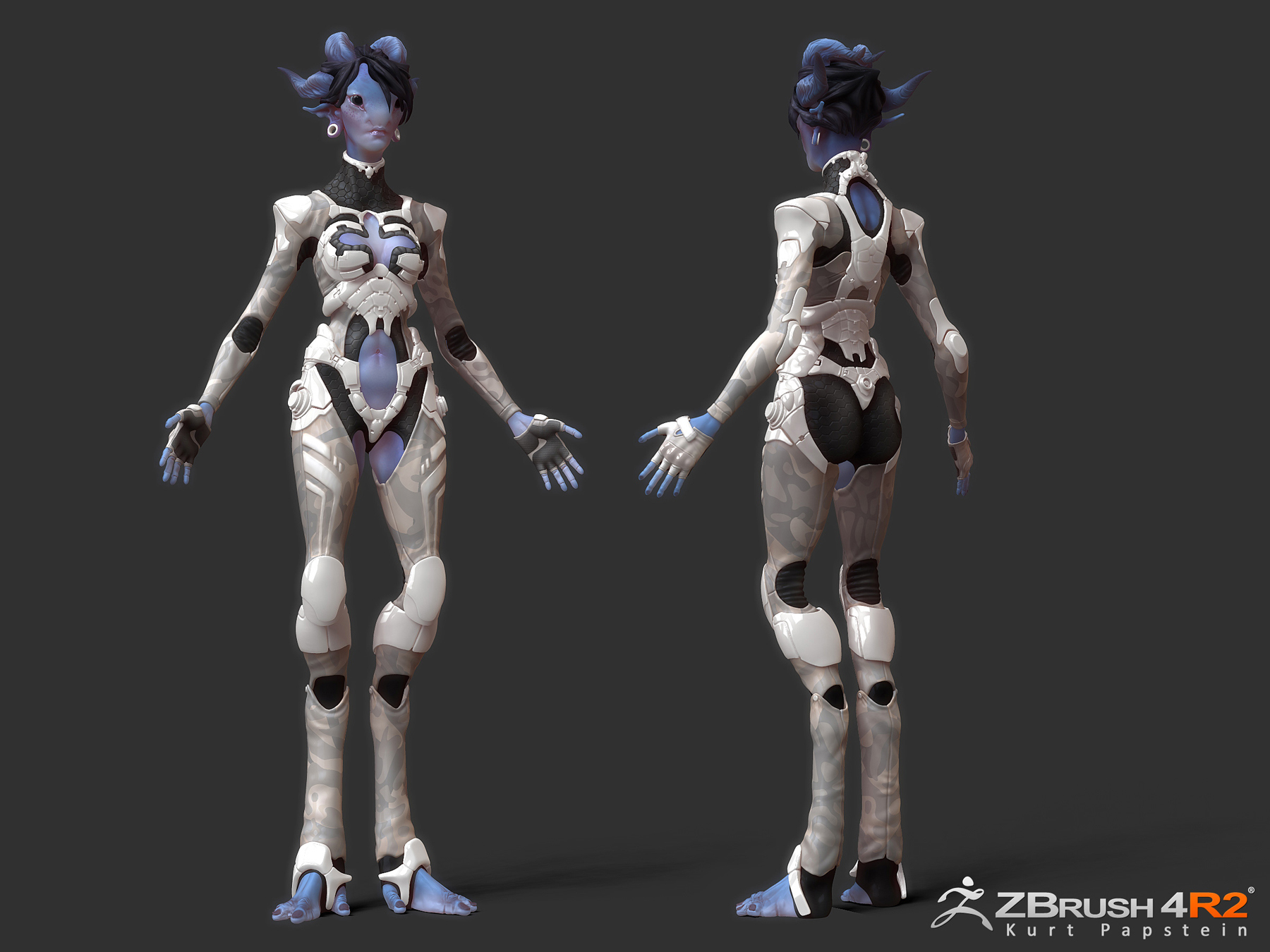 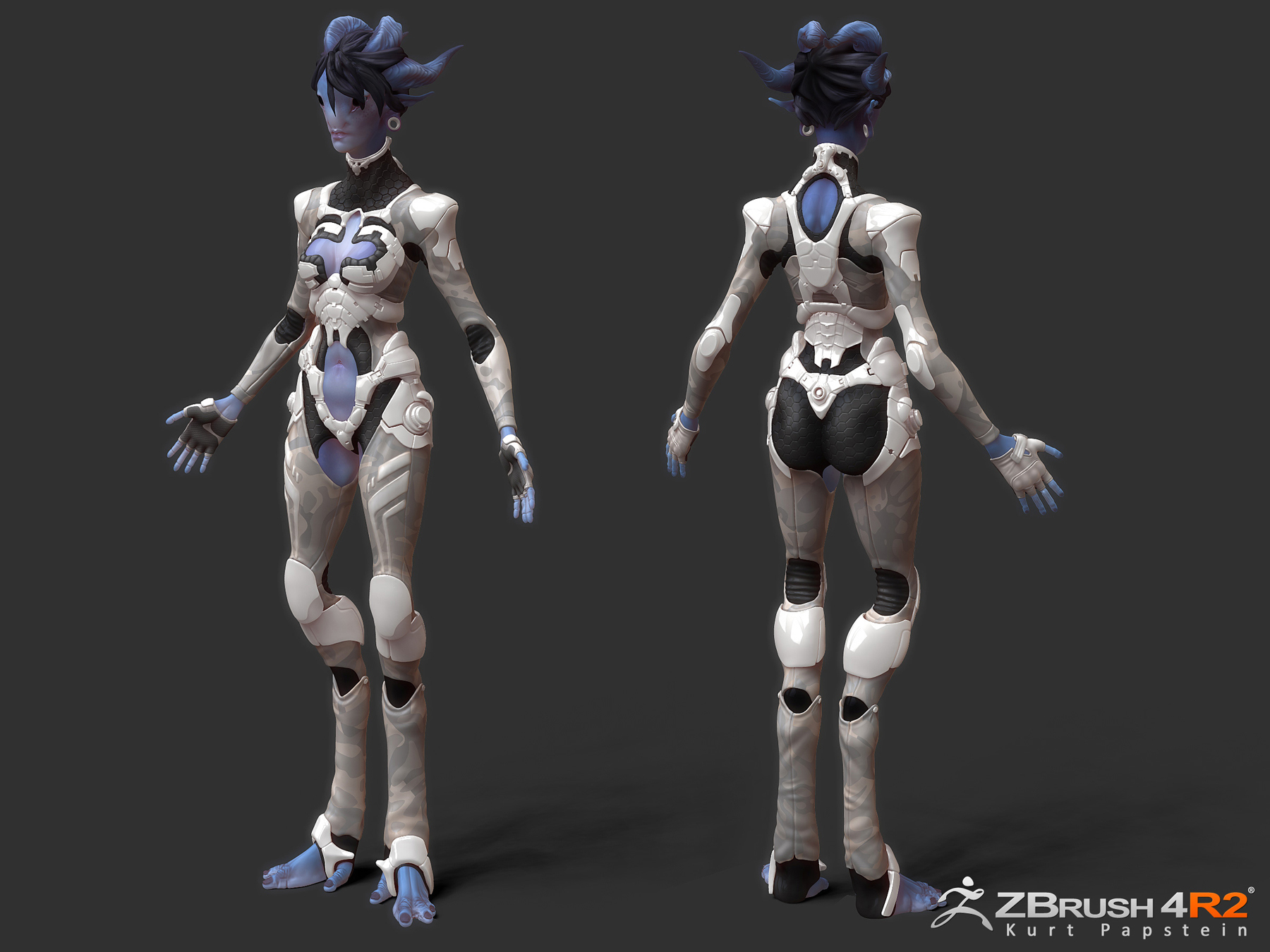 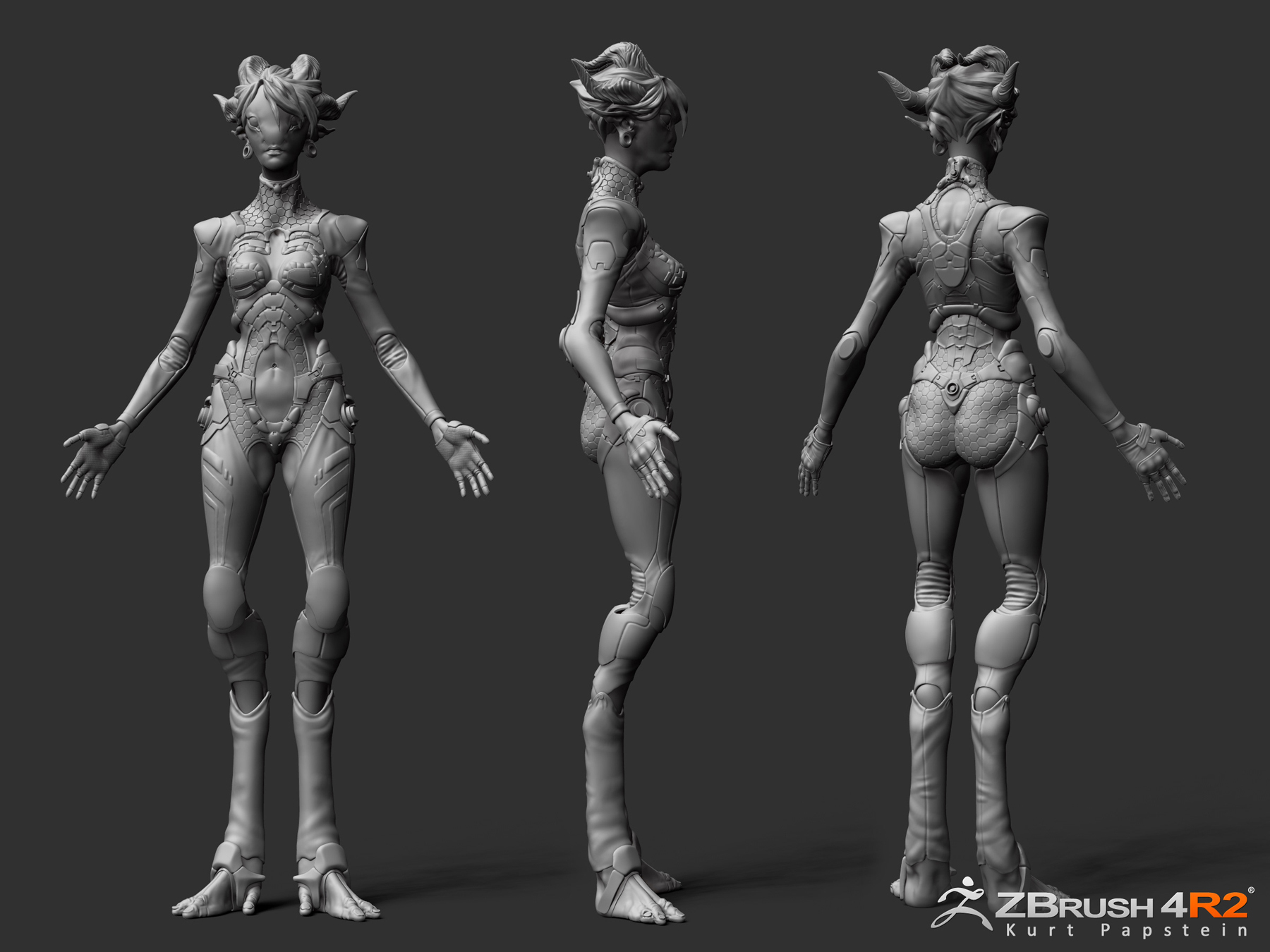 I’m absolutely in love with the design of that helmet. As far as the second set. …wow, I can’t believe Dynamesh is THAT good.
Extremely inspirational post and thanks for giving us a walkthrough.

How is that only 2 subtools? Does the speed of zbrush slow down when Dynamesh is activated?

Awesome work Kurt! I am really excited for dynamesh it looks crazy.

This is seriously some awesome work.

Nice design and what a pretty polypaint.
Thanks for sharing (and testing).

Very beautiful. Love the color of the character!

Thank you all for the kind words! I’m glad you are all liking it :]

Womball ~ The final result had multiple subtools to it, but when I was working out the design of her outfit there were only two. Her body, and the rough in mesh of the armor/clothing. And no, I don’t experience any lag when using Dynamesh at all, in fact in many cases it can make things run faster.

Here is a quick turnaround with BPR settings.

Kurt, this character is sick! Loved the design, it perfecly fits to Mass Effect universe, i bet it was your inspiration… if not you nailed it anyways! Awesome, would be great to see you guys talking about the dynamesh workflow a bit more.

Well done. She has a lot of character to her. Enjoyed. - A

Was about to say “Mass Effect” myself. I really like the look of this alien, I love the look of the skin. I wonder what R3 will bring,
ZBrush has improved alot since I started using it 1.5 years ago. It amazes me how they can continue improving it.

Dynamesh sounds too good to be true, maybe it’s all a lie

Love that female design, and the render is awesome!

Very clean, and stylized. I like that u have just right amount on detail, without getting noisy.

Awesome work. I love the look of the skin.

pretty good concept Kurt, love your Masseffect like alien.
dynamesh was really the missing tool, I was using zsphere and adaptiveskin before, I guess now its the dynamesh ‘Era’

Great work!! I’ve wonder how to make the hexagon pattern on the suit that clearly !?

could u let me know the tip

Great work!! I’ve wonder how to make the hexagon pattern on the suit that clearly !?

could u let me know the tip

He inserted this below one of the images.

To get some of the smaller details, I used the new Surface Noise plugins that come installed with 4R2. I simply unwrapped those objects in Zbrush using UV Master, and I was then able to wrap tiled texture maps across the surface!

Her look is great, for a game is perfect