XGoZ is another “Lite” approach to link Zbrush with Softimage like GoZ. It is not a Single Click workflow but provides Functions to Export - Import Multiple Objs between two applications and automatically set up shading networks in Softimage. 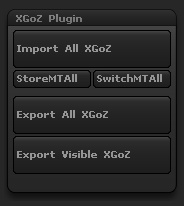 thank you kostas. it’s working! i’m happy someone is still trying to get the latest features of zb working in my beloved xsi v7.01!!

Thank you very much chem!!! I hope you find it useful!

Welcome to the club

Thank you so much Jester!!!
Your idea for GoSoftimageLite is a true inspiration! I have studied your addon alot, before I manage to figure out how to make XGoZ!

I’m working on it, now I might have time to finish. Actually what I have to do now is to automate the transaction between Softimage and ZBrush, the rest is done

it seems to work with my Softimage 7.01 Ess.

Again, I will thank you both for your great work.

As always use it at your own risk. Thank you again :) Kostas

It works like a dream …only problem I have is that it doesn’t automatically update on the trip from ZB to XSI although not a problem as I only have to click one button to reimport.

Thanks very much for doing this dude.

Thank you Kaleid for your time to test it!!!
Can you tell me which zip file have you install and in which version of softimage did you test it?

I tested it out on xsi 7.01 x64.I tried flagging zbtoxsi.exe as run as administrator but that didn’t work.It works great although I find it a little odd that you put the exporter in the primitive section although I suppose obtaining a mesh from zbrush is getting an object.I havent tested any of the other functionality as yet but will do next week.If you’re planning an update some of the functionality of gmax( matcap transfer and autogenerated displacement map render tree hookup ) would be a great addition.

Thanks once again ,been waiting for something like this to turn up for a good while now.

also another cool feature would be to check if the sent mesh haa an envelope operator ,if it does then save out the weight editor preset then on return trip from zbrush the new mesh would have an envelope operator reapplied and the preset reimported …would be a totally non linear workflow.Maybe using gator to do it would be also an option which could also transfer any morphing data onto the new mesh.

Kaleid
Thanks for your suggestions !!!
I was thinking about retaining envelope information and implementing Shape functions in a future update . The matcap transfer will be interesting also.
As for the exporter I put it there to be together with the other stuff. I Supose i must put them all in a separate menu in the next update.
For now i will try to fix the ZBtoXSI client. I am on a x86 platform so we 'll see. Does the XGoZService load on your xsi 7.01 x64?

Ive installed your plugin on another computer with the same 64 bit operating system.This time it all works apart from single click trip from XSI to ZB although it works perfectly from ZB to XSI

XSI throws an error when trying to single click export but it does actually export the mesh but doesnt auto import into ZB.
Ive attached a screengrab of the error it throws.

It is exciting for me that it works on X64.

XSI throws an error when trying to single click export but it does actually export the mesh but doesnt auto import into ZB.

OK ! I Think I found it. Have you assign the "XGoZAutoImport.zsc" to open with ZBrush? If not Please do so. Set ZBrush executable as the default application for "zsc" filetype.

I tried flagging zbtoxsi.exe as run as administrator but that didn’t work.
ZBtoXSI.exe needs Microsoft .Net Framework 4 Installed in order to work.
Have you Check it?

Great !! Got it working now .Works like a charm …and quick too !
Thanks for the help ,and sorry about not following the instructions properly.

Really looking forward to the next update.

guys is it possible to get this plugin fully working with Softimage 2011 (64-bit)?

Everything works really well apart from the Single click Journey from ZB to SI.
I tried changing the path in ‘XsiPath.dat’ to the bin folder for 2011 but still no auto import in Softimage. It’s not huge deal breaker as Kaleid mentioned earlier as it’s only 1 extra click in SI to import the obj but would be nice to have it fully functioning.

cheers for this though Kostas.