Using ZBrush in Dinosaur Revolution
Zbrush was used extensively throughout this project and as Lead Texture Artist I thought I would breakdown some of the contributions I made using ZBrush on Dinosaur Revolution. As lead texture artist I was brought in to help create a pipeline that would take the dinosaurs modeled in ZBrush by David Krentz and his modeling team through texturing and shading, and send them off for animation and rendering, insuring quality and functionality. We looked at other texturing programs, but quickly settled on ZBrush’s Polypainting function to texture our dinosaurs.

This Showreel hightlights many of the creatures I textured for Dinosaur revolution. (Additional creature texturing by Bryant Hardwick, Aaron Hammon, and Angie Rodrigues)

DINOSAUR REVOLUTION \ Texture Painting - Showreel from Kris Kelly on Vimeo.
For Dinosaur Revolution I was tasked with leading a team of texture painters in creating close to 200 photo-real dinosaurs in a short time. My tasks included working with the Creative Director and the VFX Supervisor to ensure the quality of the the characters up to the final render process.

Polypaint
Polypaint gave us the ability to use the sculpts themselves to aid in the creation of the textures with functions such as cavity masking, spray brushes, and alphas. Having Zbrush available for the texturing process made creating all the secondary texture maps much easier. We were able to use Zbrush to create highly accurate cavity maps based off the displacements which could be used in the creation of dirt maps, reflection maps, and even in the final diffuse. With Polypaint creating specialty maps, such as gloss maps were a breeze . Badass stuff, I don´t know what to say this is really raising the bar of what I´ve ever seen on dinos…

Although I was not one of the modelers that created the dinosaurs for the show, I did get the opportunity to detail and texture close-up heads using ZBrush’s HD Geometry feature. The stories in Dinosaur Revolution were extremely character based, so for some important shots the director David Krentz wanted to have ultra close shots of the main character’s faces. The details added on the heads of Torvosaurus and Allosaurus were all done by hand, each scale painstakingly added to match the original model. 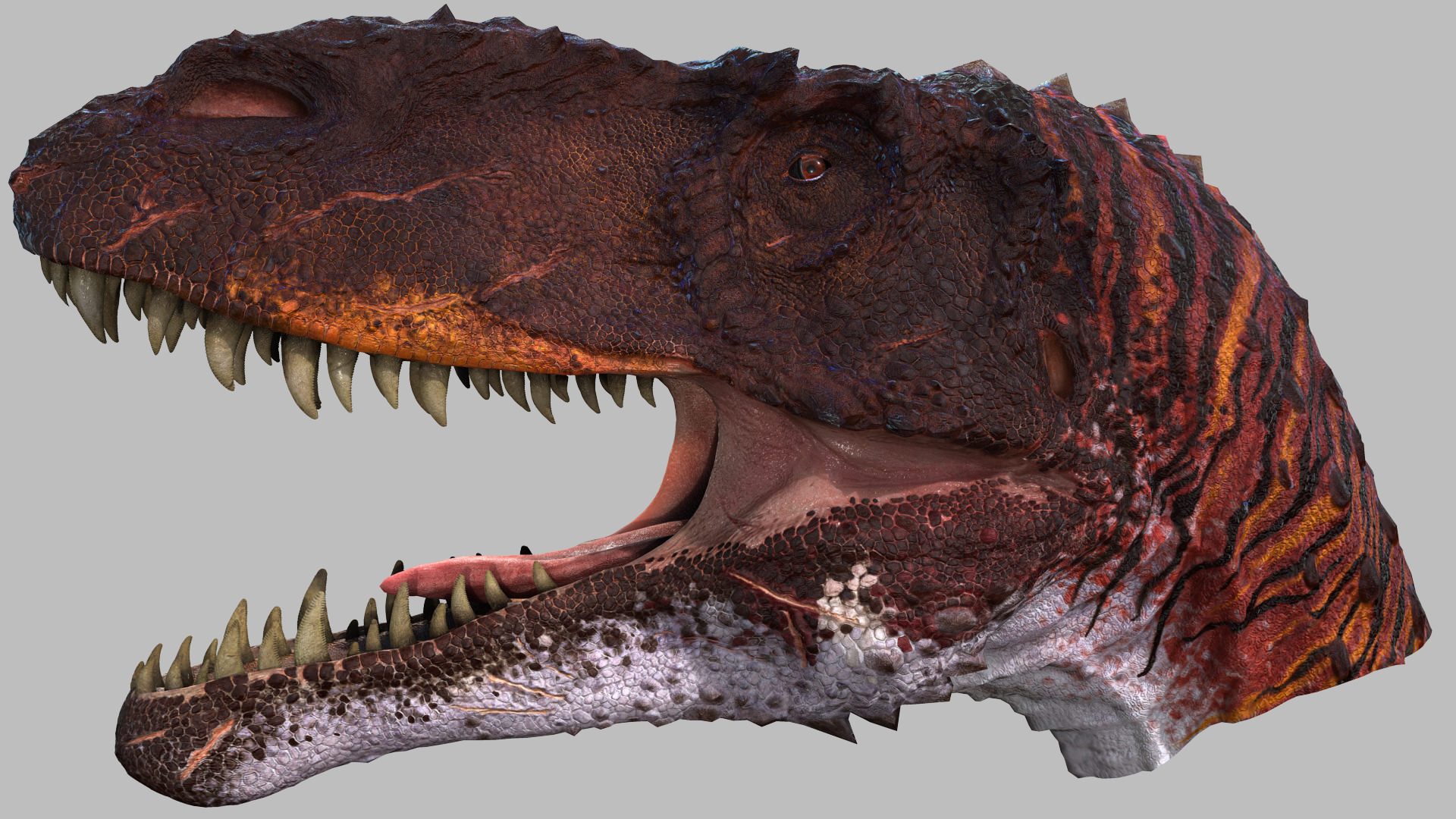 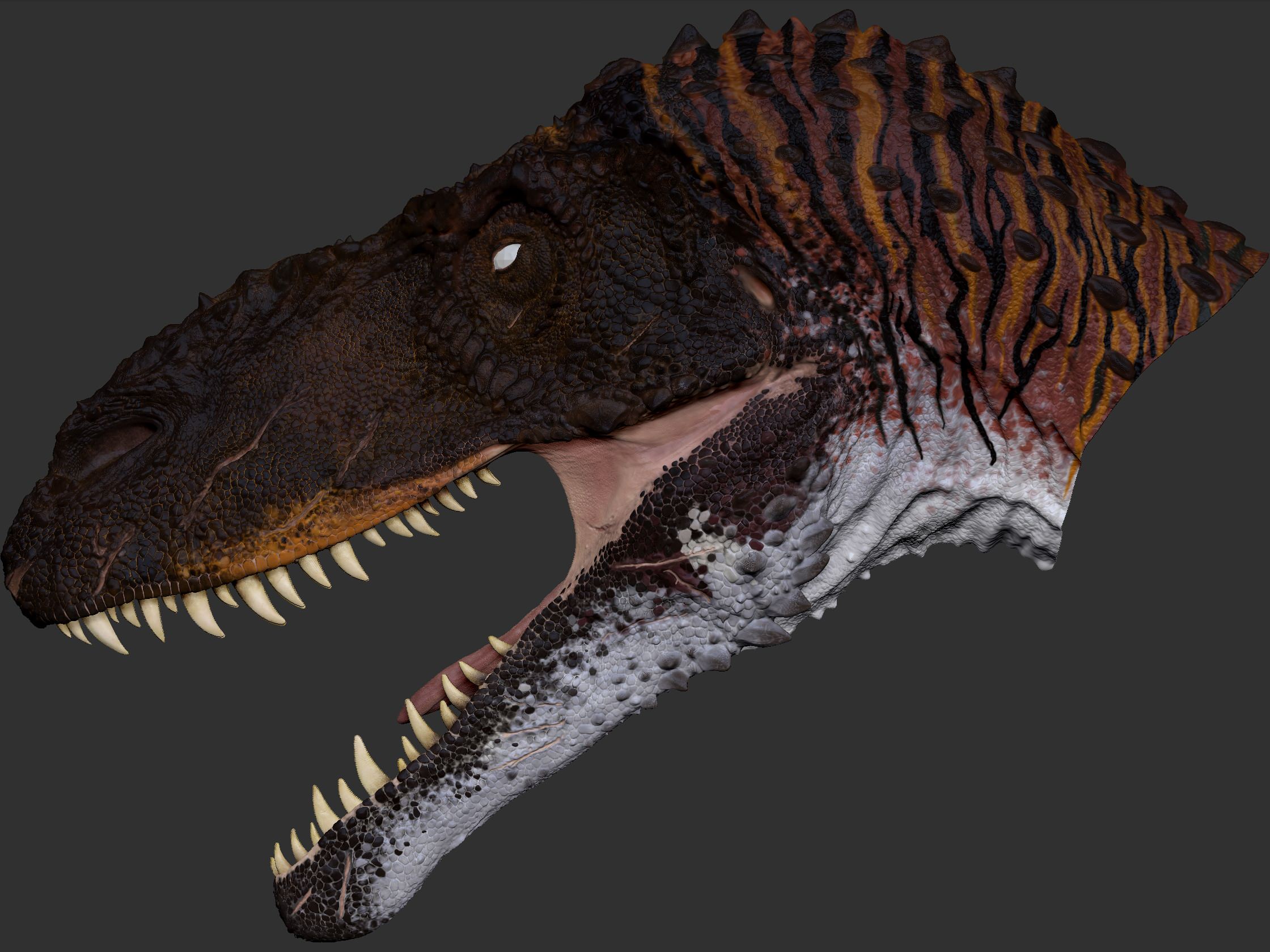 Sorry for all the post, can’t seem to get them to upload all at once. Finally, some Renders of The Allosaurus HD Geometry sculpt. added David Marmor to the credits! He modeled the Saurosuchus and Rhamphorhynchus among other dinos. Didn’t want to leave anyone out!

Also David Krentz, the director and modeler of many of the dinosaurs is hosting a preview workshop FOR FREE at Creature Workshops on Nov 10 at 10 AM Pacific Time ( california ) that will go over the same techniques used for these dinos. Register at this website.
http://www.creatureworkshops.com/

Sir, you are a bona fide genius! Wonderful work, Kris.

Wow! Amazing work! I love the textures, the paint, the mats, everything.

Wow, Kris, excellent work. I would like to know more about method you use for painting. A am trying to learn painting and sculpting in Zbrush. I actually have questions about sculpting also, but i will ask about painting only. First, how many time did you spend per Character. Second, how did you use HD painting. I know that you can’t use layers in HD, so, did you marked parts with color, and than combine that in Photoshop or you paint all at once in zbrush? Also, i would like to know who of you is best to ask about methods that is used for sculpting, and on what post to ask.

Again, it was amazing work.

to IvanKocic - Hey Ivan, great question. From first polypaint to final send off, with all the needed maps(reflect,gloss,dirt,epidermal,subdermal,etc) our texture team got it down to a week per dinosaur. I would spend somewhere around 2-3 days just on the polypainting, of course we were in a rush because we were on a schedule. We didn’t use layers in Zbrush, most of our layer process was done in photoshop. That went the same for the HD Geometry, I just did a base layer in ZBrush and did everything else in Photoshop. If you do your painting in HD Geometry your maps will export out just fine, you don’t have to combine anything in photoshop.

Again if you want to learn about the modeling process, David Krentz our Lead Modeler/Director/Creative Director/Storyboard Artist is hosting a workshop online on the 18th. 2 hour preview is already online.

How do u paint scales? i can paint 1 by 1 so how u paint they? because u can see the skyn bettwen each scale.

Hey Kris! You’ve done amazing work!!! HD renders are really impressive! What map size did you use to transfer all these details from HD-sculpt?