Some WIP from a project im working on for Dr Phillip Manning. Phil is one of the worlds leading paleontologists specialising in dinosaur anatomy using scar patterns on fossils to asses and calculate muscle attachment etc. Phil and his team use sophisticated tech to calculate muscle mass and weight and the images Im showing are the early results. The model will be used in printed publications along with some animation for a sequence in a national geographic produced documentary. 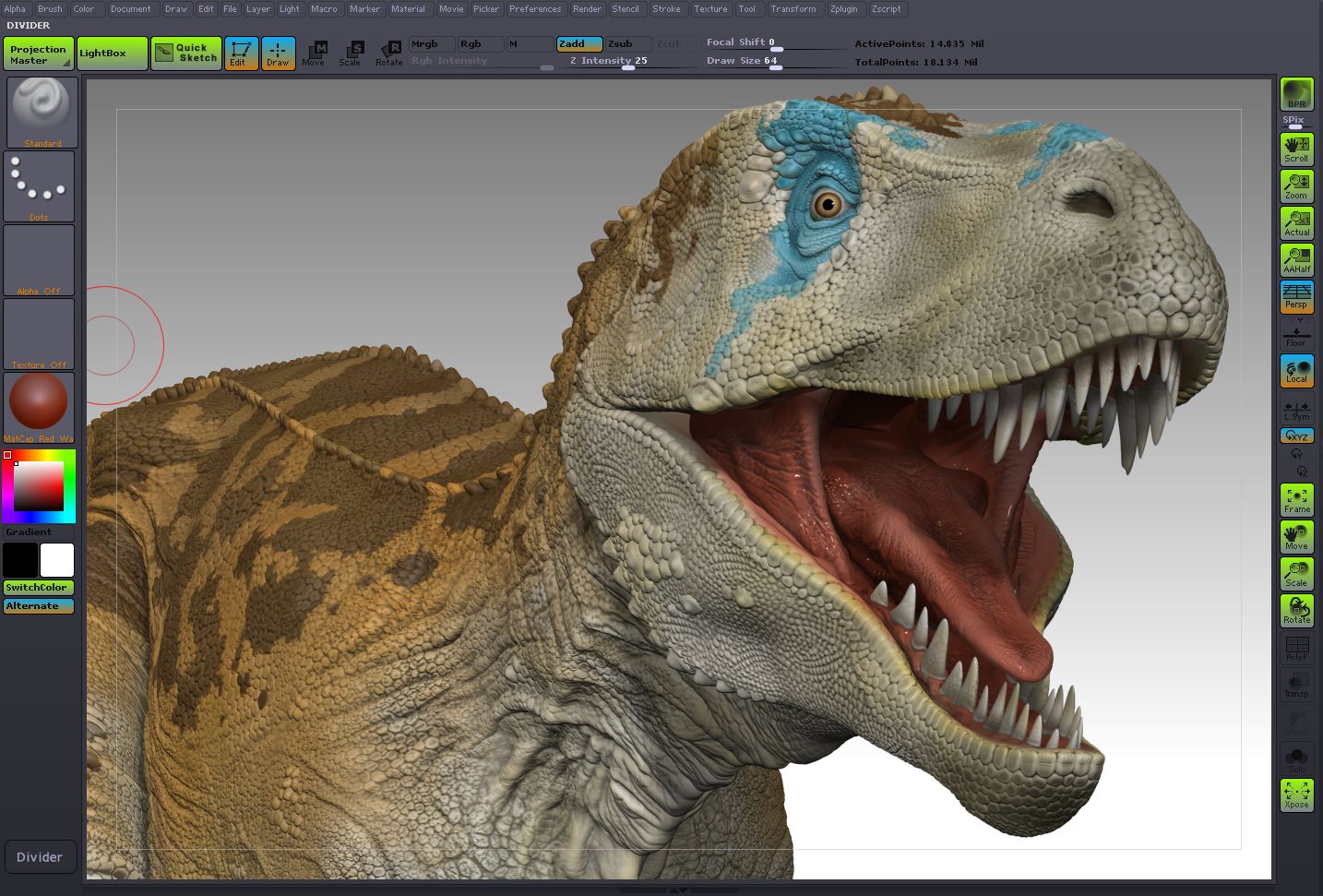 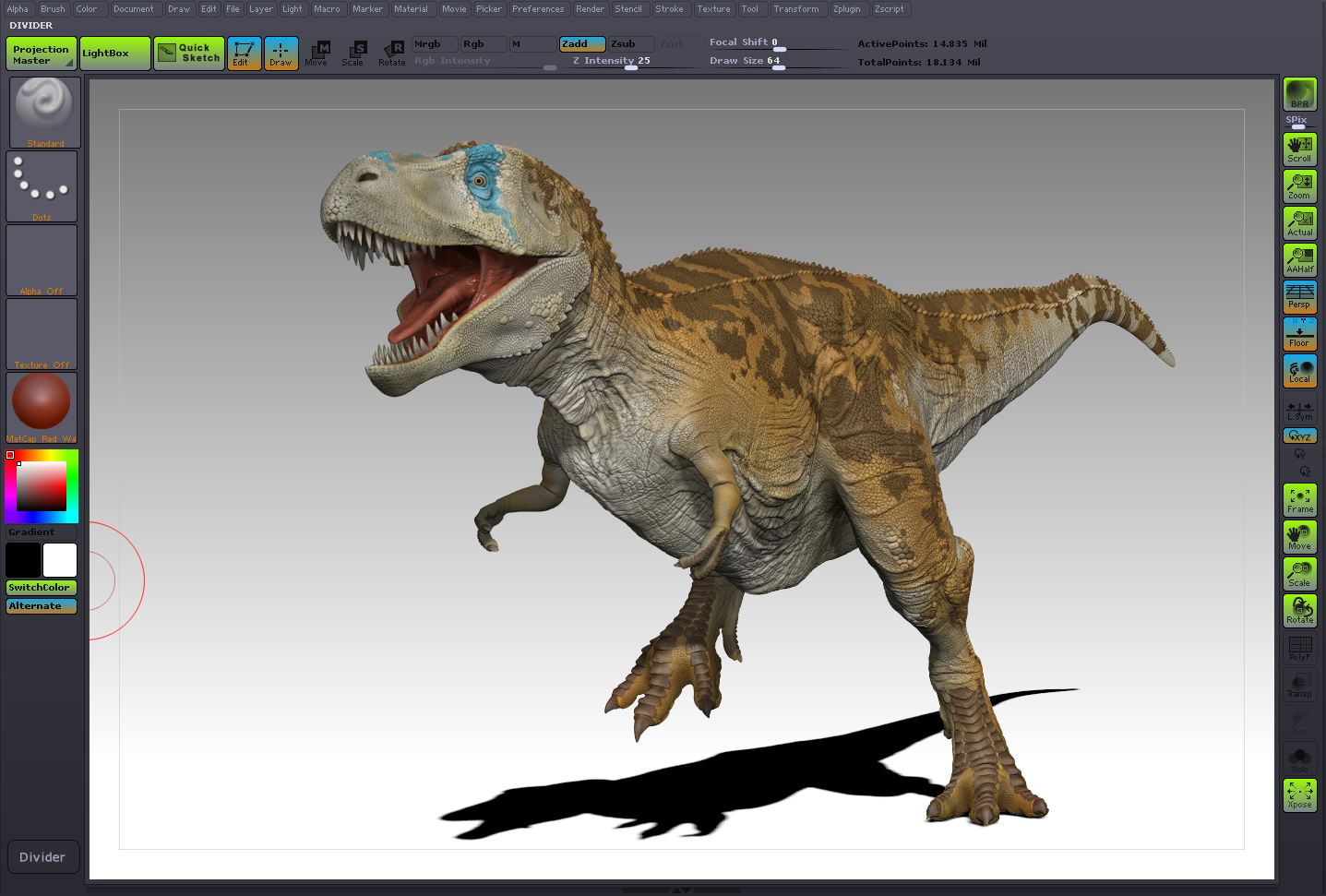 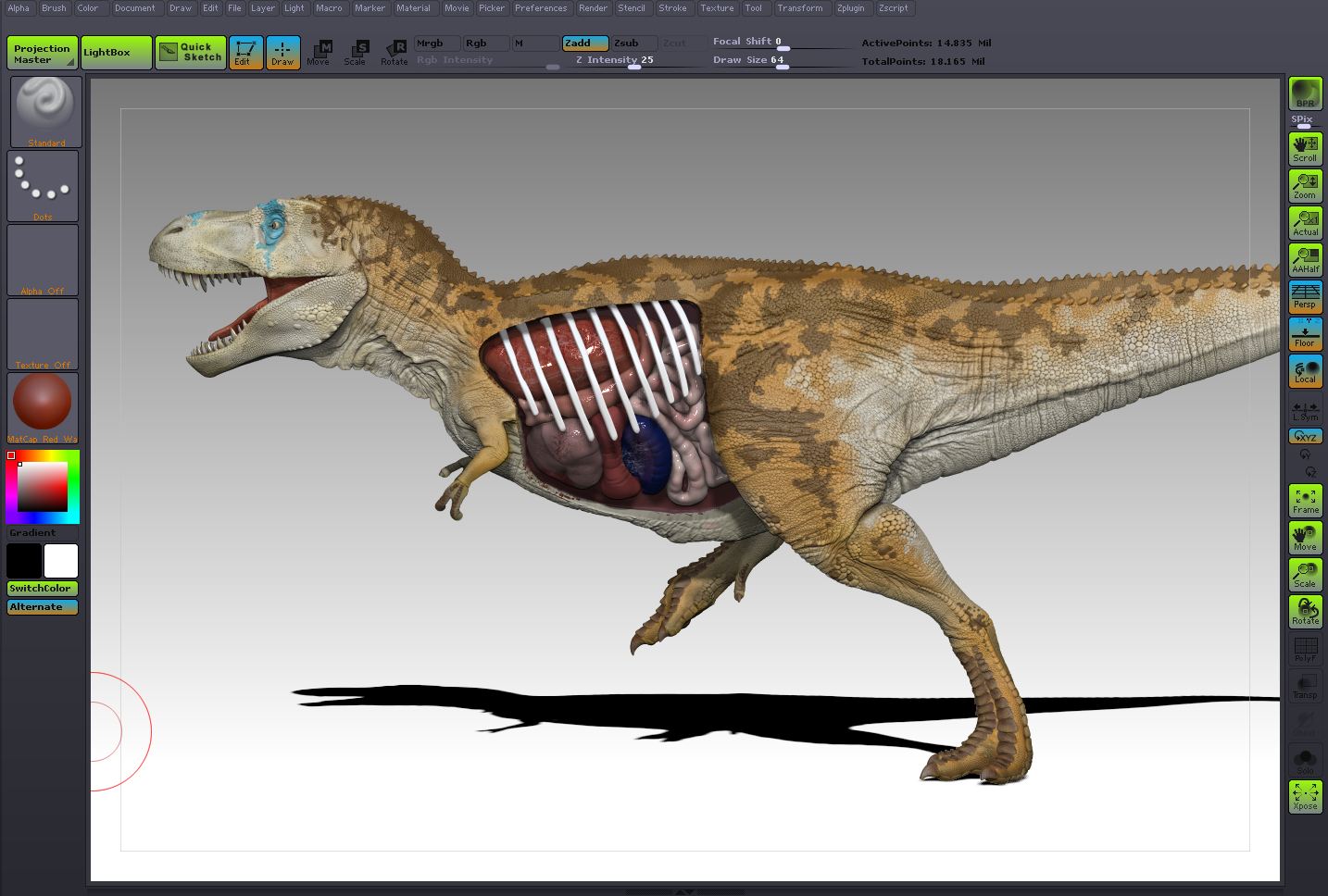 totally one of the coolest dino i have ever seen! Love it!
The detail is just amazing and the level of realism is niceee!
Awesome texturing work too!
Top Row for me!

Thanks Guys…appreciate the feedback. This is a tough one as everything I do to the model…every tweak is inspected and commented on by academics before final approval…sort of sucks the joy out of working on it.

great detail in the scales on the face - any trick to that, or just painstakingly sculpted?

Its a tried and tested old technique…

Using mask I draw the scales…invert the mask…and use a mixture of inflate and other brushes. 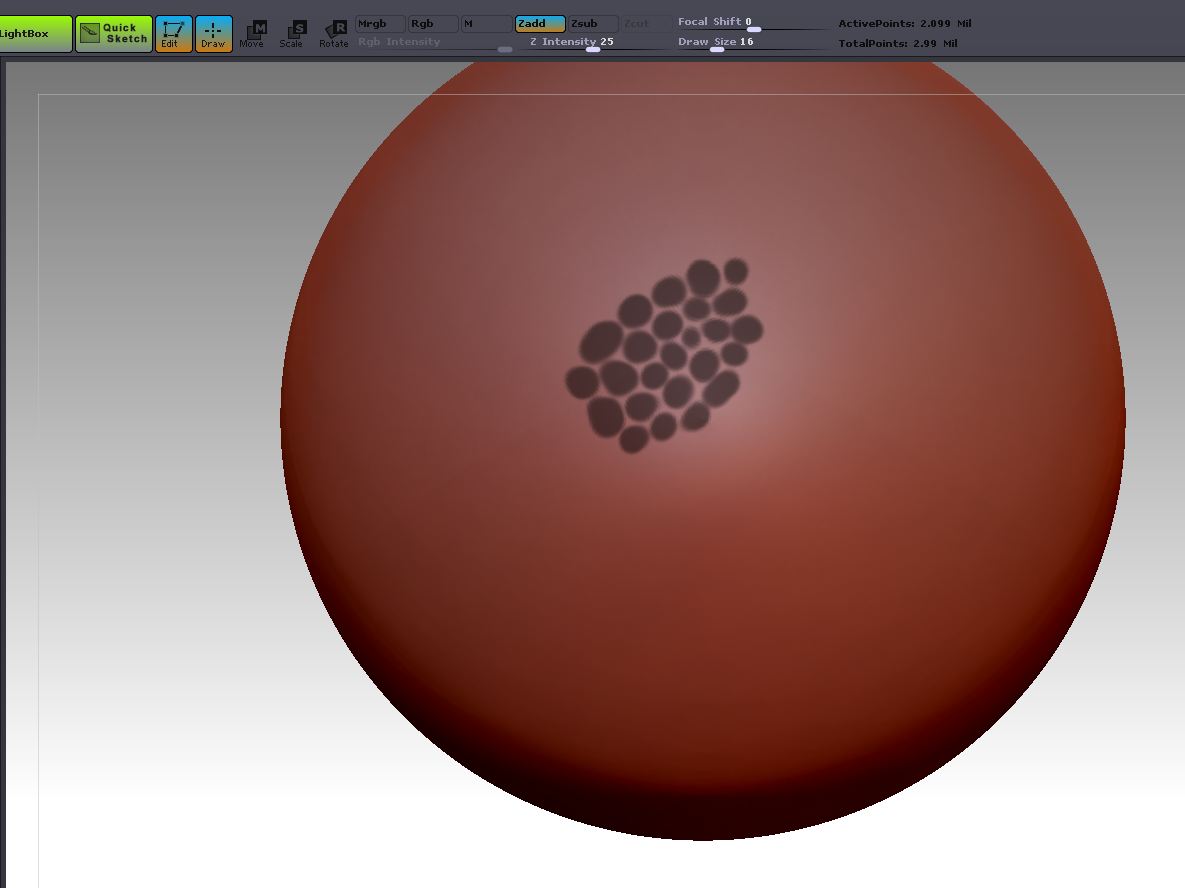 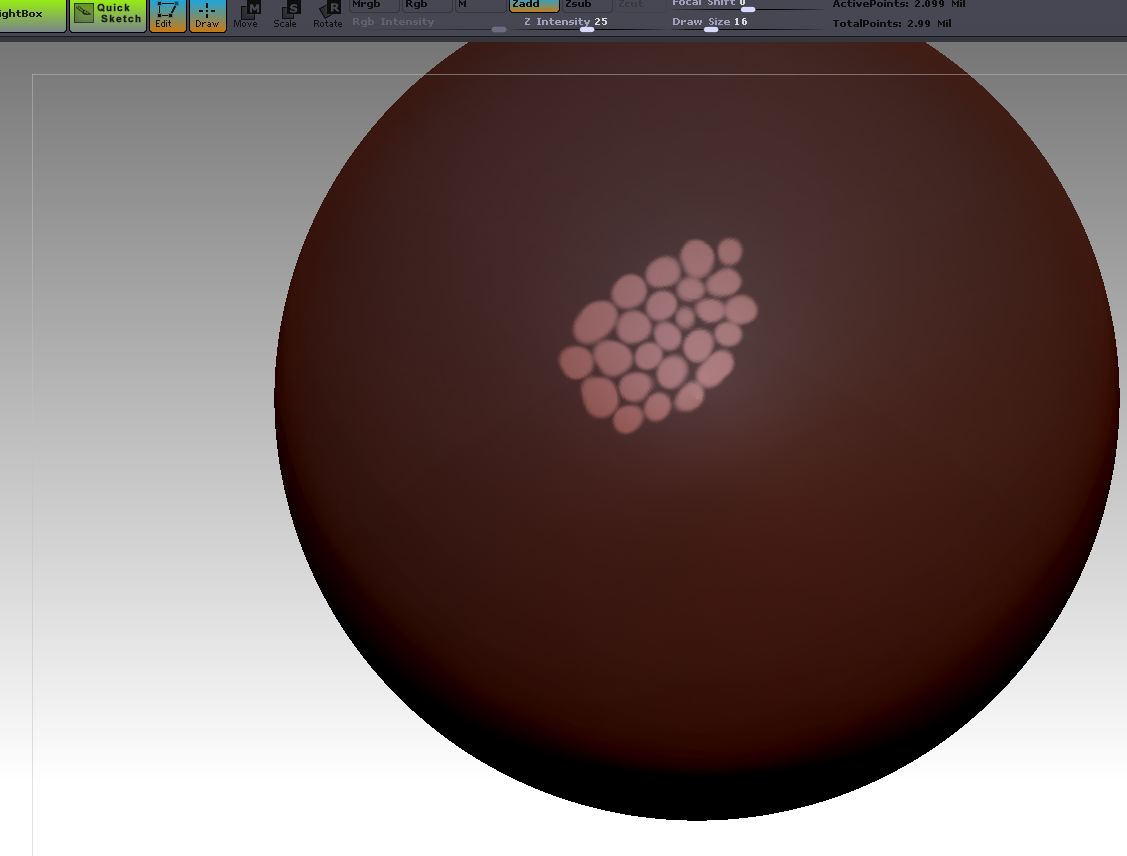 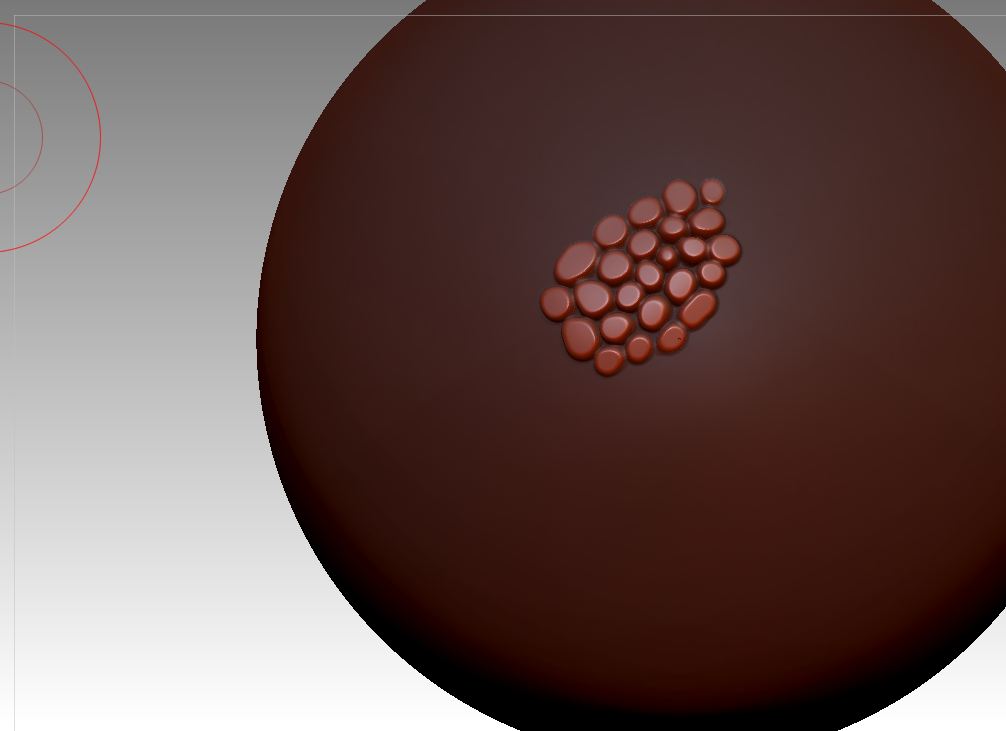 Thanks for the tip!

very nice work!
i’m sure you get only the best reference material. lucky you!

Great Work! Great Tip for creating scales!..Only one question though… How can you work with those rainbows in your buttons! LOL

I have the glowing interface simply because it helps me see stuff in my peripheral vision. You should try it.

And…a happy new year to all…bring on the fibres…I can do prehistoric mammals then.

Oh yes Pete, lovely work! Amazing that you’ve drawn the most standard Theropod pose there is but it still looks fresh and dynamic, a great take on a classic sculpt, and up to date too! No huge feet and skinny tail, but then you know Phil Manning so you SHOULD be up to date! Still, I can’t imagine having Paleos checking every detail, must drive you nuts! Especially when they don’t really know what Rexy looked like, much of their educated guesswork is still guesswork! I bet the standard image of the big guy will look way different in another 10 years!
And muchos gracias for the tips on doing scales too! I was wondering how you got them so good! Still, that’s a hell of a lot of work, how many ploys was this bad boy? Looks like about 400 million! I’ve tried several Theropod heads but I find Im always running out of detail (or losing my symmetry…Aargh!).
Still, another stunning job Pete, I look forward to your work more and more! I’m off to try out that scale method on an Allosaur!

Very nice work, Peter !
You wrote that the muscles are as accurate as possible : what about the colors ? Did you chose the patterns/colors (especially the blue around the eye) yourself ? Was Dr Phillip Manning involved ?

The poly count on the T Rex is around 18 million…sort of the max for my machine at the moment. I could crank up the sub division even further but I find it best to live within my means and I tend to use “Smooth normals” in BPR to enhance rendered images.

The colours are imagined but based on science as we know it. Creatures like the T Rex had huge ocular cavities and brain scans show the area of the brain that dealt with vision were quite complex. These guys had great stereoscopic vision. If you look at present day nature…birds through to reptiles there are plenty of examples that show bright colouration with the most random “blotches” of colour that simply serve to attract the eye of an observer to that feature. Birds especially demonstrate this feature when trying to attract a mate. Other creatures use it to demonstrate and emphasize the fact that they are dominant etc. Its a given now in scientific thinking that birds are basically dinosaurs and as dinosaurs were around for millions of years its pretty safe to assume that they developed ways to attract…threaten etc through visual displays.

The next model Im producing is a juvenile T Rex as evidence is stacking up to tell us that they lived in family groups. The most startling new thinking is that many juvenile dinosaurs may well have been feathered. basically a fibrous coat of simplistic feathers.

Back to the T Rex colouration. I havent finished painting the adult yet (By the way…its called Stan as its based on the fossil nicknamed Stan by the people who found it. There are many casts of the skeleton around the world and the one Im using is at the manchester university Museum in the UK) As always…thanks for your comments. Some more WIP from a book Im working on. This is Giganatosaurus…absolute monster of a therapod that dwarfed T Rex by a meter in height.