got me inspired! Really like the book idea! Keep it up

Great work so far… I’m going to have to learn zspheres better. You make it look easy…

So I cut back on the grass…

marcus_civis: Thanks! I was mostly thinking about placing objects from one viewpoint. The gyro is so easy to place objects along all axes without tumbling your view. Also it’s easy to constrain along axes, rotate around the object’s pivot point (would be great for eyes), and snap to the surface of other objects. A ‘snapshot’ feature would also be cool (probably could do now with a simple ‘clone, append’ macro). I think the gyro would be an awesome addition to subtools.

Brutikong: Thanks! It’s not SO easy… I do wrack my brain sometimes.

I love the composition and also… you are a Master of ZSpheres!
Bravo Marsyas!

That’s it! you’re gonna have to do a ZSphere tutorial now! Serves you right for doing so well! ;)

Your modeling is looking really good. The way you created that book is very cool. I never would have thought to create it that way using ZSpheres.

Been wrestling with the background. The perspective won’t really allow a horizon and moon unless I cheat quite a bit, so I tried out some ‘walled-in’ compositions (which I’d already gotten used to considering I had a plane in the background).

Eventually settled on some big rocks (perhaps they were standing stones once…) and added some fog for a night effect. 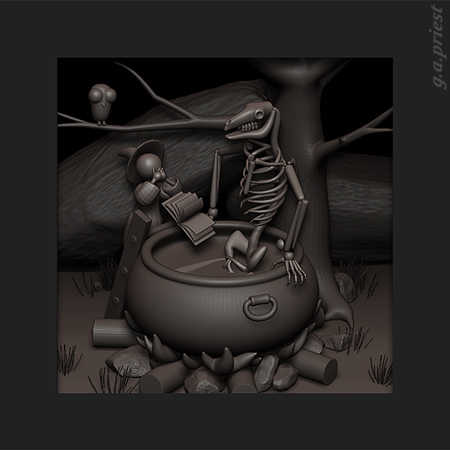 piz: Thank you! I had a lot of practice with zspheres in Z2…

dustbin1_uk: Haha, I’ll try to make some zscripts for some of the stuff I made–You can find some old Z2 zscripts a little ways down in this thread: (http://www.pixolator.com/zbc/showthread.php?t=38188) I doubt they’ll work in Z3 though. 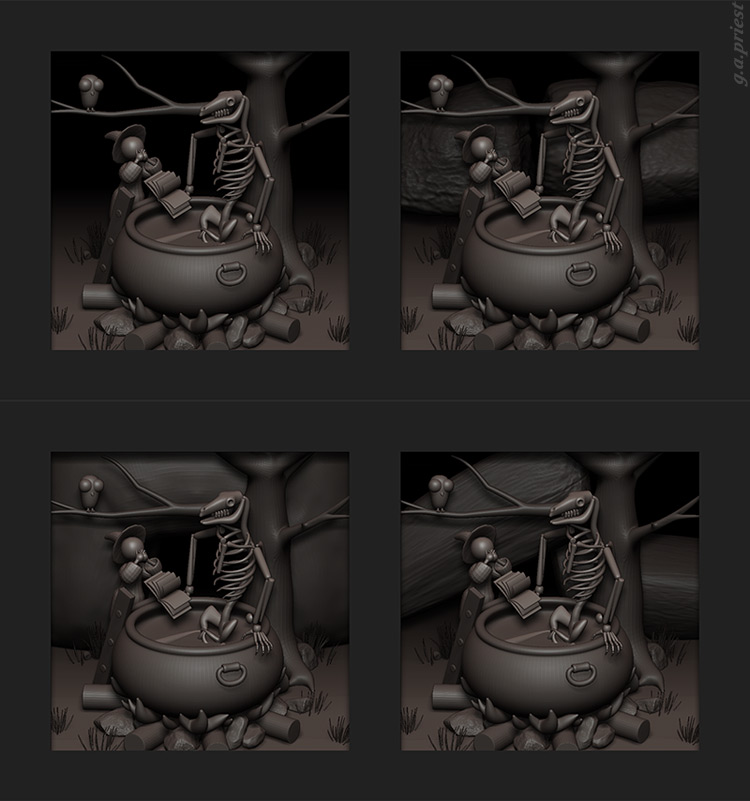 thats a really nice workflow u have

I think is Excellent!

For my personal taste the best is wip6a

You are really making progress on this, Marsyas. I love all the detail!

I too love this image. I like the Lego-esque styling.

Have you tried a composition where the creature has turned its head to face the witch and is looming over her a bit more? It might raise the suspense a touch.

Finally getting to the fun stuff–Sculpting!

Starting on the ‘Horsehead’ ghoul, much more work to go:

Disco Stu: Thank you! I wanted to discipline myself, blocking everything in first.

Slosh: Thanks! Finally getting to the real detail…

Rory_L: Thank you! You’re right–I’ve only blocked things in at the moment, final poses yet to come.

Very good work, and very instructive. Good work of zspheres in the book.

What are those sticks hanging from the eyes? is that to help point them? Btw, he’s supposed to look sorta ‘happy’ rather than menacing–though the witch is afraid of him, he thinks the witch is his mother…

At least I’ll have learned a lot about skeletal anatomy in case I don’t finish on time. Another very good reference in my personal Marsyas folder!

Hahah! I just ran that script and it made a knotted mess of zsheres on the screen. Still I’ll check out the rest of that thread to see what to do.