Hi all I hope to get my concept art up soon. My first idea is to have a space ship beaming down aliens for trick or treating and having trash cans for cookies, candied apples, and such items that they don’t want to eat either. My second one was to have the space ship beaming down a hole lot of aliens in bush costumes or some such thing. I know it will be something to do with aliens. will post concept art as soon as I can. Good luck to all and most importantly have fun, I know I will, being the first ever contest I have ever tried but being my fav holiday I have to do something…

Ooooooo aliens! How about, aliens take over all the monsters at halloween with mind control thingys and then make them go trick or treating FOR THE ALIENS!!! :lol:

How about beaming up a ‘cow’, in this case a trick or treater dressed as a cow, with terror in his/her eyes and face! Candy spilling down, hands and feet hanging - the look on the face will say it all. Make sure the little fella drops a banner or has words on his costume concerning fear of probing…

Just a suggestion, love the overall concept you have. These kinda things give me the willies…

oh man have too many things going through my mind to focus always a problem for me. anyway need help chosing…

I love both your ideas dustbin1_uk and Jason Belec ohhhh man more ideas streeming in lol. thanks for the help I have a hard time with humor since I am such a cornball…lol. I think everyone who has posted an idea or wip so far has been wondeful to see. I love halloween!!! have fun not only with the contest but happy halloween to all as well.

well I have finally decided… 4 gargoyles in costumes… one in a princess costume dancing around (happily I might add) with bubbles (maybe) and the others looking on. One with his hands over his eyes in a ohhh no or ohhh man not again look. one with his fingers in his ears for if he hears the one in the princess costume he is going to go into a giggle attack. And third will have his hand over his mouth either trying not to laugh or more likely scream. Hear no evil, speak no evil, see no evil or at least in this case hear, speak, see no silly. Also I am thinking of having the three gargoyles all wearing a costume of like…such as super hero’s, the four MT. Rushmore “presidents”, or drac, alien, mummy, Frankenstein. the reason I say four characters is the one wearing the princess costume is supposed to be dressed like them hence the costume laying on the ground. all on top of a building with a flier stuck to the side of the building saying something about a public Halloween event…

programs at hand for me

will try to do all in zb

also if anyone wants to do any one of my ideas feel free to do so except #4 and #5 I will be doing those for another project. or #8 it is my back up plan

been working a lot lately. finally have time to have fun. have some concept art and have started base model will post very soon well as soon as the spook gets out of my scanner lol. anyway realizing not a whole lot of time left may have to try another idea that would only include 2 characters.

this is the 2 character idea that is my back up plan.
#8 Mother goes to a closet, to either look for her kid to go trick or treating or get a jacket for herself. It is dark in the closet except for this either alien face or really creepy glowing face is staring back at her. she is scared half out of her wits. Next cell on pic shows her on her bottom looking mad at her kid for scaring her silly, for there he/she stands in the now lighted closet looking so cute in cute costume like a cowboy or a princess. There is a box on the floor or a bag in his/her hands that reads “Clear glow in the dark makeup and accessories” and a makeup brush and empty bottle laying on floor. The kid is obviously a Halloween closet case and wants to be scary not cute.

Ticktock, the clock is ticking and I am struggling with a laptop that don’t wanna play working!

I like your new concept though I think you could have an ‘un-noticed’ goulish hand or monster about to grab the kid from the closet when he is in the middle of wetting himslef over scaring his poor old mam.

A goulish hand is fairly quick to make.

dustbin1_uk thanks for the idea and taking the time to post. Yeah thought about hands as well as the face but this backup idea is based on a real bad nightmare when I was a child at least I think I was asleep…needless to say it scared me silly. There is more to the story and my mum wasn’t involved but the rest is too scary to be silly so…and scanner still has spooks it acts as if possessed lol. I am going to try later after sleep, been up for 34 hours finishing up my work so that I am totally free till end of contest. I have already the base mesh and some sculpting on both ideas just haven’t got around putting it up yet. will soon.
p.s. I have never tried to model a toilet either or too many inorganic models. I can only assume box modeling in zb or another program for base with the bowl and round objects as flat boxes. then taking it to zb for sculpting and rounding it out. Don’t hold me to this for I have never done one before I wish I could help more. If you figure it out let me know when you can after the contest if you do…never know may need to flush some models down the good’ol porcelain god…lol. good luck with your idea and modeling. Happy zHalloween.

I like the concept too and dustbin1_uk’s suggestion has given me an idea, although I’m afraid it would give you a little more work! As I understand it you visualize cells like a comic strip (good idea!). So:
cell 1: as you describe.
cell 2: as you describe + dustbin1_uk’s goulish hand coming out of the closet.
cell 3: very similar to cell 1, with the kid’s head replaced by the goulish hand’s head. You could actually repeat cell 1 and just replace the head.
You could also put some “…” at the end of the strip suggesting that the cycle could repeat indefinately with each scare being worst than the last.

I made it back. Ohh man what a few weeks. between a family emergency and my comp having a melt down and then me… lol it’s been interesting. Comp and family doing good now. any way I hope it is not too late to sumbit my wip images i couldn’t till now cause of the perfect timing of the bad luck monkey. Anyway I don’t care gonna do it anyway. I am actually proud of it. They are my first full blown models with textures, and this contest helped push me to learn zb and not just play and dream. I would like to win, who doesn’t, but I have already gotten something out of this, and there is always next year. Now I know that I can uderstand this program and get the detail I have always imagined in my head out as I couldn’t with standard progs or drawing as you will see. lol it’s my chicken scratch gargs. so with out further bla bla. Hope you all had a great hallows eve.

p.s. I love Poly painting!!! thank you so much pixologic. I can now texture and pm which was a real hard thing for me to learn in 2 works so well with polypainting. Good job guys.

This is what I hope to acomplish before deadline I am almost there…but may have to settle for next pic.

the sun is up. it is the day after halloween. the janitors go to the roof and surprised at what they see. gargs in costumes frozen in stone as well as some of the sculptures. they can’t belive their eyes it looks as if they were having a fun party but gargs and sculptures can’t move can they??? 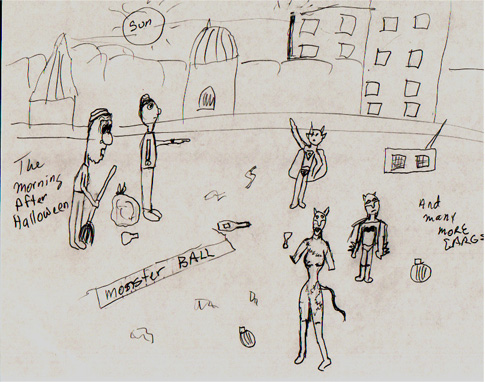 here is what I will probably have time to do…

gragoyle cataolg. costumes for gargoyles and sculptures alike. funny stuff written about the costumes such as
comes with or with out arms and legs…sorry costumes for non-heads sold out. ect. 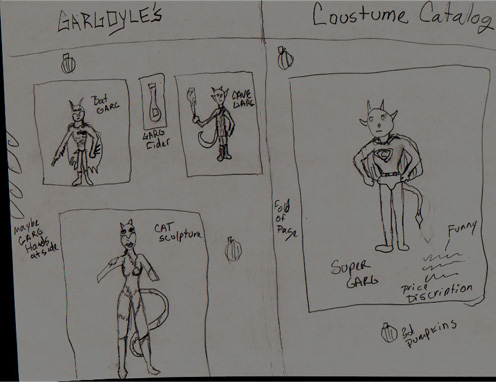 this is a refence drawing of a garg I did in the begining of contest or so.
[attach=74736]gargoyle.jpg[/attach] 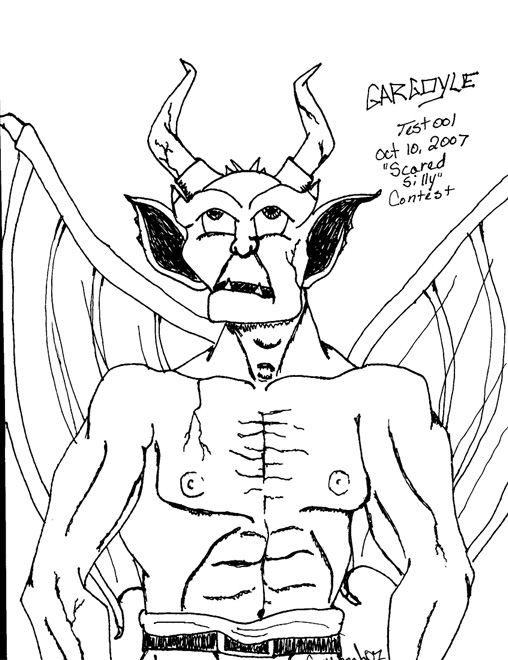 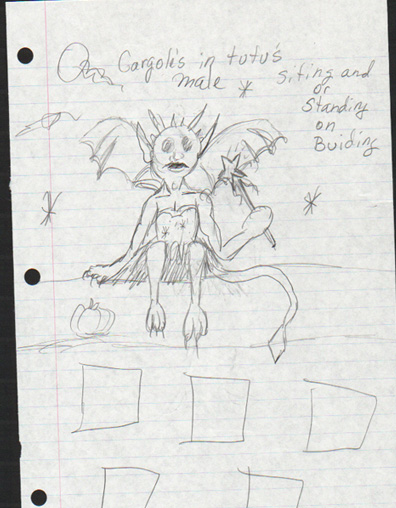 thank goodness that I back up everything on an external hard drive. for I didn’t lose, much, when comp had a melt down (causing my brain to crash lol or is it the other way around? I am too tired lol been up for 36 hours trying to get as much finished till I either finish it or bust lol. anyway here they are.

this one is the start or at least up till the club and cloths. All gargs so far come from this one base mesh and it is done by zspheres. here it is all textured using zb only…layers of polypainting and pm. 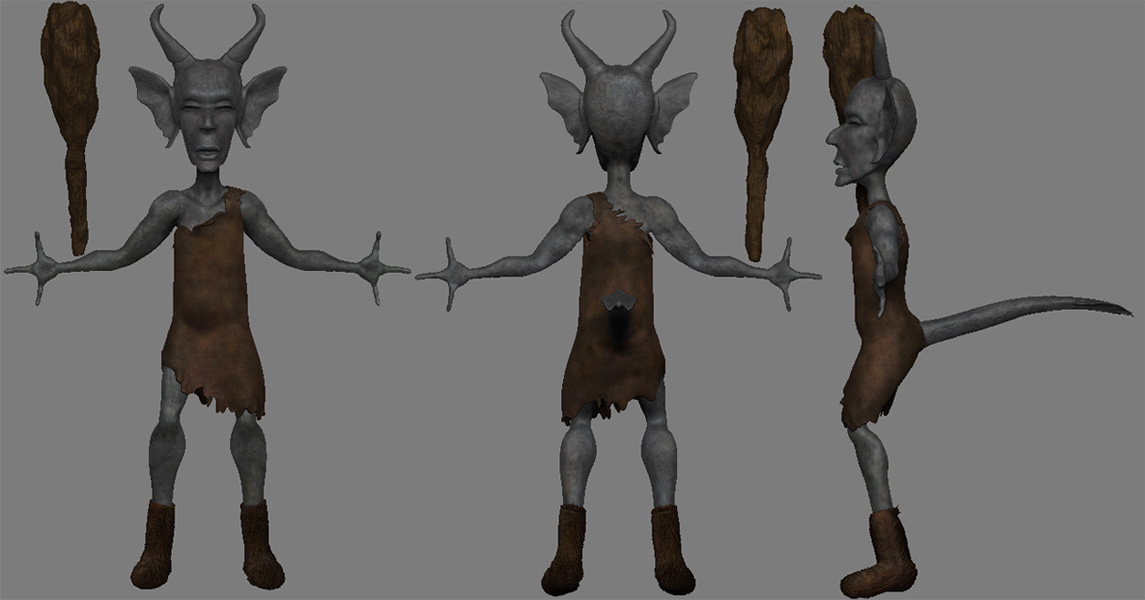 here is a little garg. He was made by moving and scaling the cave garg till he became a total differnt chacter. then ading clothing and textures. The s logo was made in photoshop as an alpha and texture then brought into PM and put it on his shirt. 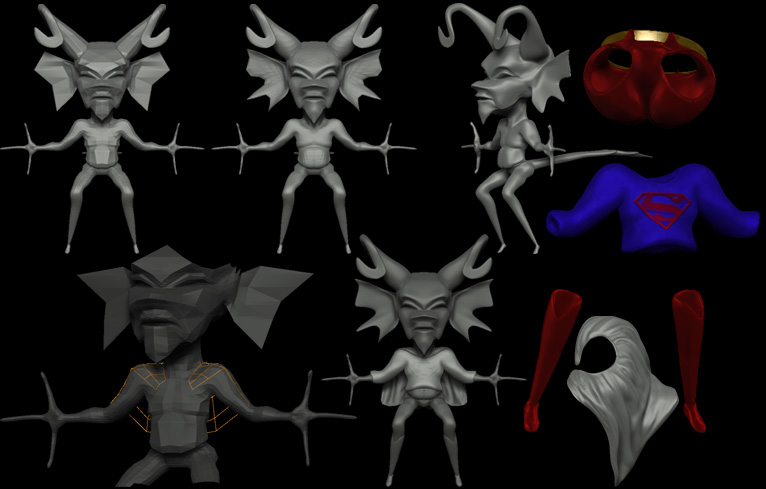