It sounds like the .bat file does not get called or the commands it contains fail. You could try running the .bat script manually, but before you do that, make sure that Preview Faces and Faces Per Voxel are set to their default values (9973 and 10000) and then perform another export.

If running the .bat file manually also fails, could you please let me know what the first line of the .bat file says. You will have to open it in Notepad or some other text editor.

I don’t have the means to test on Windows 7 but the ZScript is working fine here on Windows 10. Tested on both an admin and a local user account.

Your .bat file content is different compared to one created by ZBrush 4R7 P3 on Windows 10. I could not get your batch file to run on my system. Here is what mine looks like:
[HR][/HR]cd “C:\Program Files (x86)\Pixologic\ZBrush 4R7\ZScripts\VRMeshExport\VRMeshExportData\ExportedFiles”
ply2vrmesh.exe *.obj ZBrushExported.vrmesh -flipYZ -previewType clustering
if /i “%CD%” == “C:\Program Files (x86)\Pixologic\ZBrush 4R7\ZScripts\VRMeshExport\VRMeshExportData\ExportedFiles” (
echo “###### Deleting the .OBJs and .MTLs exported from ZBrush ######”
del *.obj *.OBJ
del *.mtl *.MTL
)
[HR][/HR]
Notice the proper lowercase/UPPERCASE of the directory names? That is probably where it fails.

Btw, did you accidentally merge the two lines that delete the .obj and .mtl files? If not, then that is something else that will fail.

I have an idea for an alternate way of executing the batch file with proper folder names, but I’ll need some free time to test. Meanwhile you could run the above batch script instead which should work on your system.

I seem to have forgotten to ask which version of ZBrush you are running?

Ok, thank you very much. I think I know why that may only appear on Windows 7 and not 10.

I will see if I can make some changes tomorrow.

P3 is the latest release/patch.

Thanks skaale, sorry I didn’t see your comment before. Would love to see your fractals rendered.

So, here is a new version of the VRMesh Export ZPlugin. The main change is compatibility with all versions of Windows (hopefully) and some refactoring of the code to make it easier for me to make further changes.

If the ZPlugin does not work for you then please let me know the version of ZBrush and OS that you are using and any error messages you received. Posting the generated VRMeshCreate.bat (Windows) or the VRMeshCreate.shl (OS X) would also help.

The latest version is now >>here<<.

Hmm, not sure what is going on. ZBrush might perform the [ShellExecute,…] command differently on Windows 7 as the ZPlugin is working fine on Windows 10.

I have updated my previous post with a ZPlugin that now works on Windows. Please tell me it works chooj, please

Btw, I don’t there exists a ply2vrmesh.exe for 32bit Windows, so if no vrmesh files are created that could be why.

the same error - something about wrong directory… The difference is that now it not generating an OBJ, only BAT. Im start to thinking that this bug could be because of cyrillic letters in the name of my disc.

a text from BAT :

The ZPlugin should still be exporting .OBJs. Nothing has changed with how they are exported. The “problem” is probably that now the .bat file is actually being executed and it removes the .OBJs when it is done. But the ply2vrmesh.exe seems to be failing.

Im start to thinking that this bug could be because of cyrillic letters in the name of my disc.

Aaah, that might be why ply2vrmesh fails. I have added checks for extended ascii characters and removal of the path from subtool names (if you import an .obj into ZBrush the subtool name actually includes the path it was imported from.)

Please give it one last try. I have updated the ZPlugin in my previous post.

I downloaded a Windows Virtual Machine from Microsoft and the ZPlugin works fine on Windows 7 and 10, so I am not sure what else I can do. You could try running ZBrush as Administrator but I did not need to.

There could of course be a problem with your ply2vrmesh.exe, either it is corrupt or does not work on your version of Windows? You can try it out by starting a command prompt (cmd.exe), drag the ply2vrmesh.exe file into the command prompt window and then press enter. It should tell you if it can run or not.

Here is a new version of the VRMesh Export ZPlugin.

The main addition is actual functionality for the VRMesh Export > Export Highest SubDiv switch. Before it did nothing, now it automatically sets the subdivision level of each exported subtool to the highest level. When the export is finished it returns each subtool to its previous subdivision level. Useful if you have many, many subtools (VRMesh Export has a limit of 400 subtools, but I think that is ok;))

The second addition is VRMesh Export > Show Command Execution, which is helpful when troubleshooting errors or to determine the effect, timewise, of the various ply2vrmesh settings. On OS X it launches the shell script in Terminal.app and on Windows it pauses the batch script execution before it exits.

If you run into any problems with generating the .vrmesh files then please run the ZPlugin again with VRMesh Export > Show Command Execution enabled and post the output here.

Edit:
It appears that some arguments are not supported on older versions of ply2vrmesh. Please make sure you are using a recent version. The ply2vrmesh executable displays the build date when run. When writing the ZPlugin I used ply2vrmesh builds from June 12 2015 on OS X and June 16 2015 on Windows.

Restart ZBrush and you are good to go.

(If you read my message previous to editing, sorry my browser for some reason showed me only some of the first messages when I wrote it)

Hi Mark. Thanks for doing this. I tried the last script you posted above and keep ending up with just a VRMeshCreate.bat file. I hope you can see the attached image, showing the scriptoutputwindow. Does this make any sense to you? Thanks a lot. Hilmar 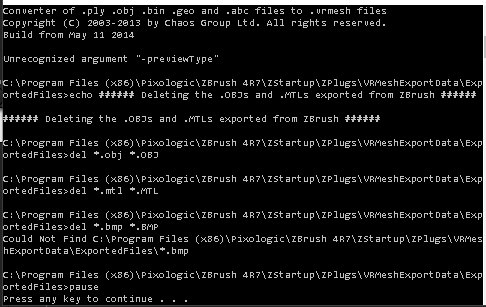 Thanks for the output Hilmar, that does help.

The ply2vrmesh executable that you are using is from May 2014 and apparently does not support one of the arguments. If you can update ply2vrmesh to a newer version that would solve the problem. If for some reason you cannot update then I could make the offending argument optional, previewType in this case. But there may be other arguments that are not compatible with your version of ply2vrmesh, so it would be easier for me if you could update.

Thanks KeuPon! If your original post was very naughty then don’t worry, I never saw it

I got it. AND YOUR SCRIPT IS WORKING NOW!!! That is so cool!!
Thanks a lot!!! Will make things a lot easier.
Thanks!