A few months ago I got involved with a short film being created by award winning Director Brent Sims. I liked his outlook on the modern horror genre and bringing back the feel of the old classics. I read through the screenplay and what Brent had in store for full features.

Naturally I jumped at the chance to get myself and my studio Airship Images involved. The project already having Chris Valesco ( composer from Mass Effect 3, Borderlands 2, Darksiders and many others) , horror illustrator Anton Semenov and many other talented people on board.

We formed a kickstarter to get the word out and help fund some elements of the project. It was a success and we raised enough to start the chaos. We were looking for 10,000$ and we hit $12,659. I’ve been part of a few kickstarters now failed and successful and I still think it’s wonderful way to test the water and raise additional capital. Here’s a link to the kickstarter. The short films are short vignettes of what could be larger features.

We are almost complete with the VFX and have an opportunity to show some of the work done so far on the film.
The project was shot in Louisiana on 5k RED camera and the VFX heavy film of the three features a monster, a little girl and a heroic bear.

First step was creating the bears digital double. We had 3d scans done in-house but the results were not ideal so we chose to use them as proportion reference and create model from scratch. We used dynamesh and then zremesher throughout to get better working topology.

We textured it all with polypaint and then combined fabric bump maps for the final renders.

The stitching was done by painting a small mask where we wanted it to be, then using subtool>extract. Double and Tborder off. We then zremesh at a low resolution. Maybe 0.2. The resulting mesh then smooth and inflate.
Taking the original arm model, invert the mask and brush over the ends to create a depression. Smooth and cleanup. 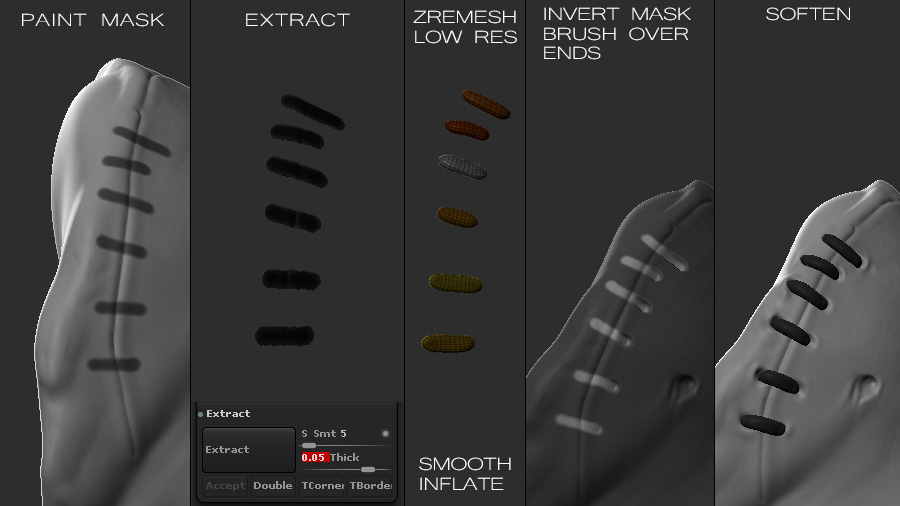 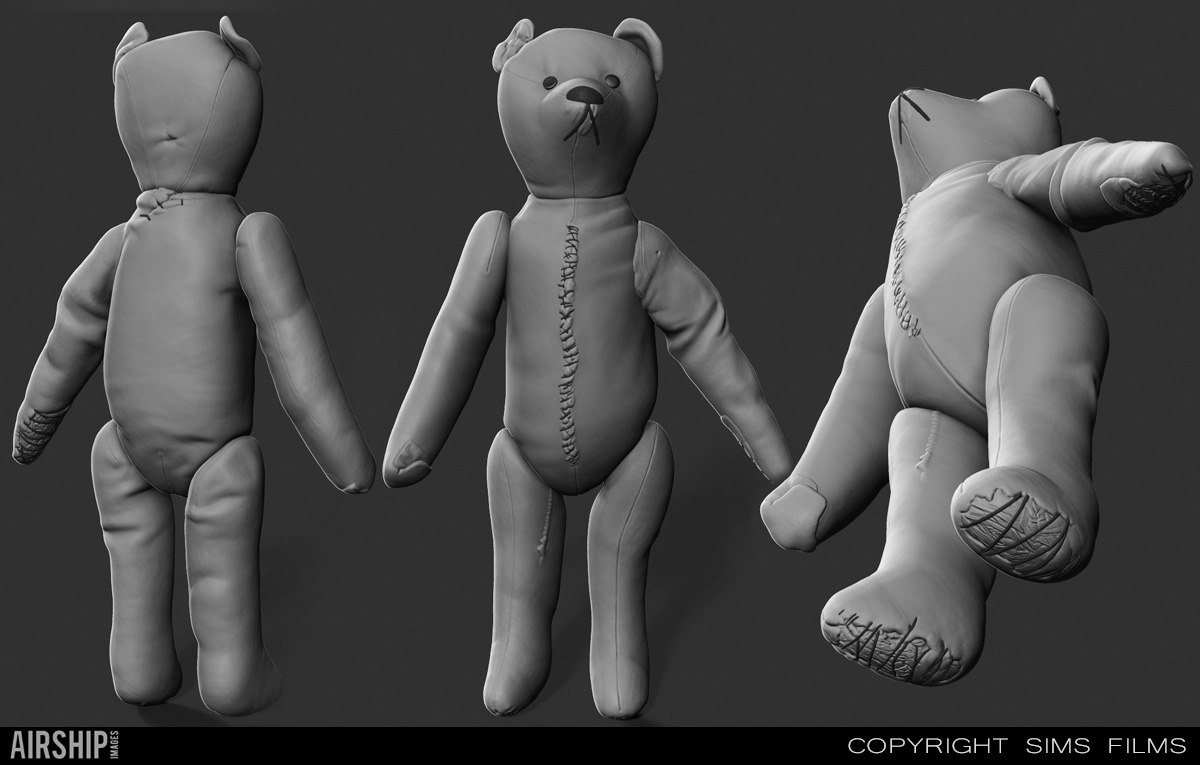 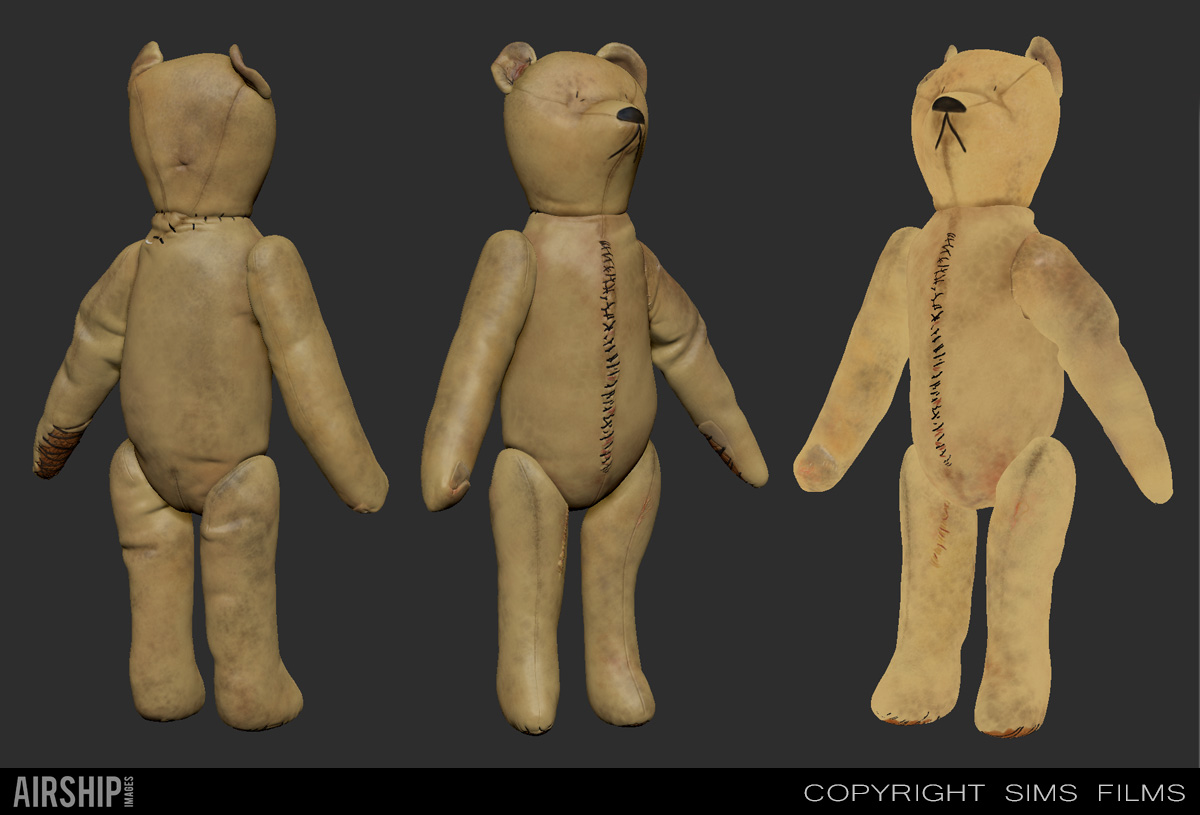 Next up was the monster which Anton provided some really neat concepts for. We took those and experimented, coming up with a quite a few different designs.

Zbrush really was great for us throughout this project and I personally learned a lot about rendering in it. We took HDRI’s on set and using those in zbrush rendering and in keyshot we were able to send images throughout showing how the monster would look in different scenes.

Something I learned especially was that creating materials that are not matcaps is hugely beneficial because of the lighting options you have. Matcaps do not react to light and it can cause you to miss certain details. It’s great to change matcaps often while working but many different materials just as good as matcaps can be made by using combinations of double/tri shaders, fresnel masks and diffuse curves. I’ll be showing some more on that in a future post and maybe some downloadables. The monster rendered out of zbrush. We based his mouth on those scary deep see fish. Basically ’ what mouth would you not like near your face ’ was our brief. We polypainted this guy as well, the polypainting tools once you’re used to them are very versatile. Using layers to create design and color options. And here some shots from the film , still Work In Progress. I’ll be posting more up when we have the finished film.
Thanks for reading.

As part of the kickstarter, we offered many rewards. Some of those included art prints, t-shirts and one of the major rewards was a 3dPrint of the monster.
I mocked up how the final 3d print could look. ( not posed ) We are still deciding on the specifics, color, action pose etc but here he is - The render above is straight out of zbrush, dirty lens effects included. The flexibility of the rendering in zbrush means changing shader, color, texture and other options is only a few seconds render time, with results that are more than acceptable. More to follow on this.

Haven’t even seen some of this stuff. Really cool work, Joe. Looking forward to watching the film

Hey awesome stuff, it’s been great to be able to contribute to this project