Hello everyone! I’m a semi-noob but decided I’d make a thread as I hope to be doing and sharing some personal work as time goes on. This is my first post with any work here on ZBC so I appreciate any feedback!

First up is a model I started a while back and never finished. He was sort of a motivation blocker as I know I can do much better now so I decided to just finish him off and use him as a personal learning project that will help me improve by making various mistakes. I don’t know too much about rendering in zbrush - but tried what I could and look forward to learning more as time goes on to improve final images. Also I need to learn how to get nice large images with decent quality for ZBC (any tips appreciated). For now they are saved for web at 50% quality so… its going to hurt the image pretty bad.

Meet the Corbae - an arid region dweller you wouldn’t want to walk up to for a hug. Hope you enjoy!

Links to Higher resolution better JPGs here - Click the plus sign on the image to view full size: Quartering- Back- Front

I’ll add some close ups and some zbrush screengrabs a bit later on. 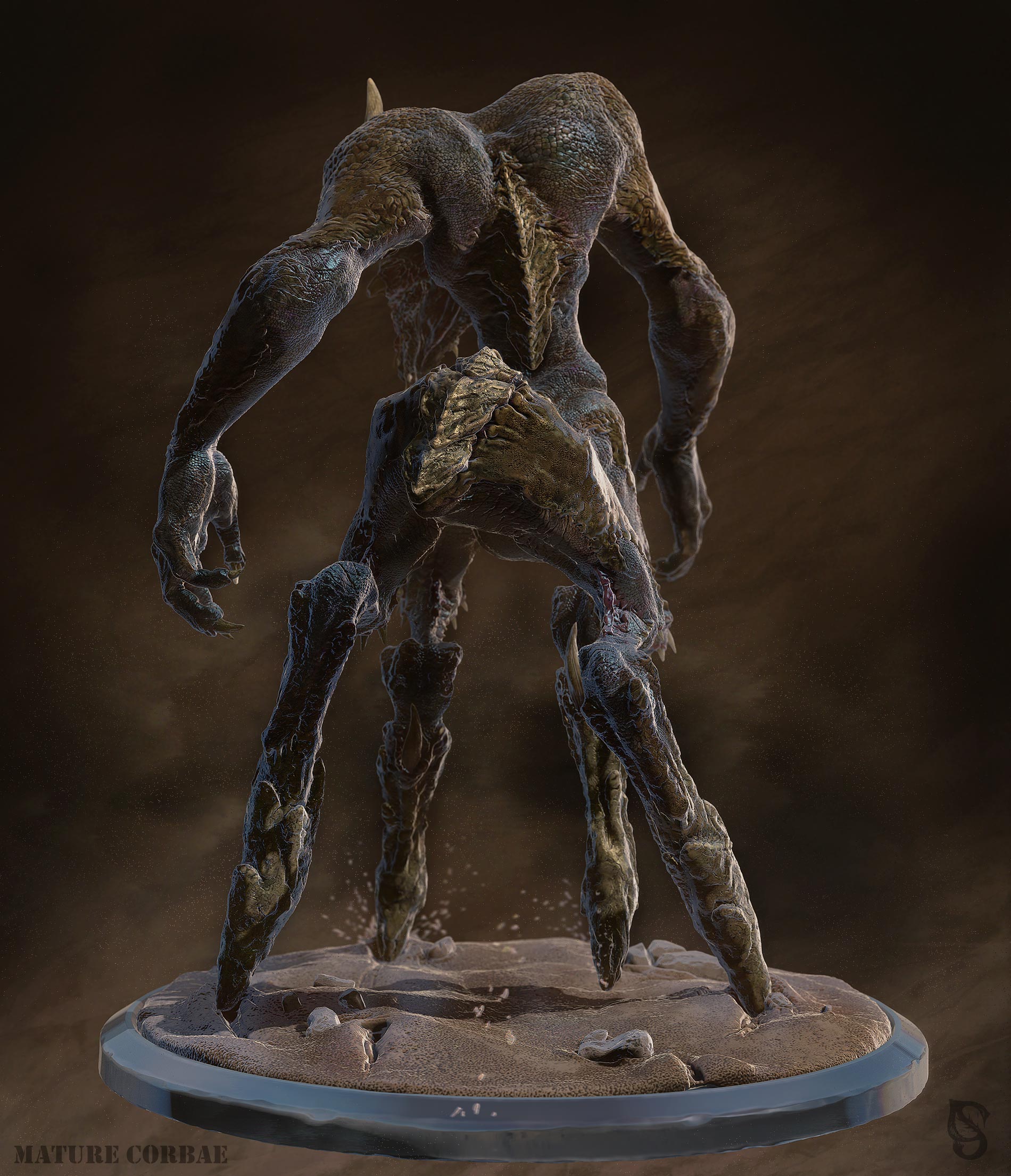 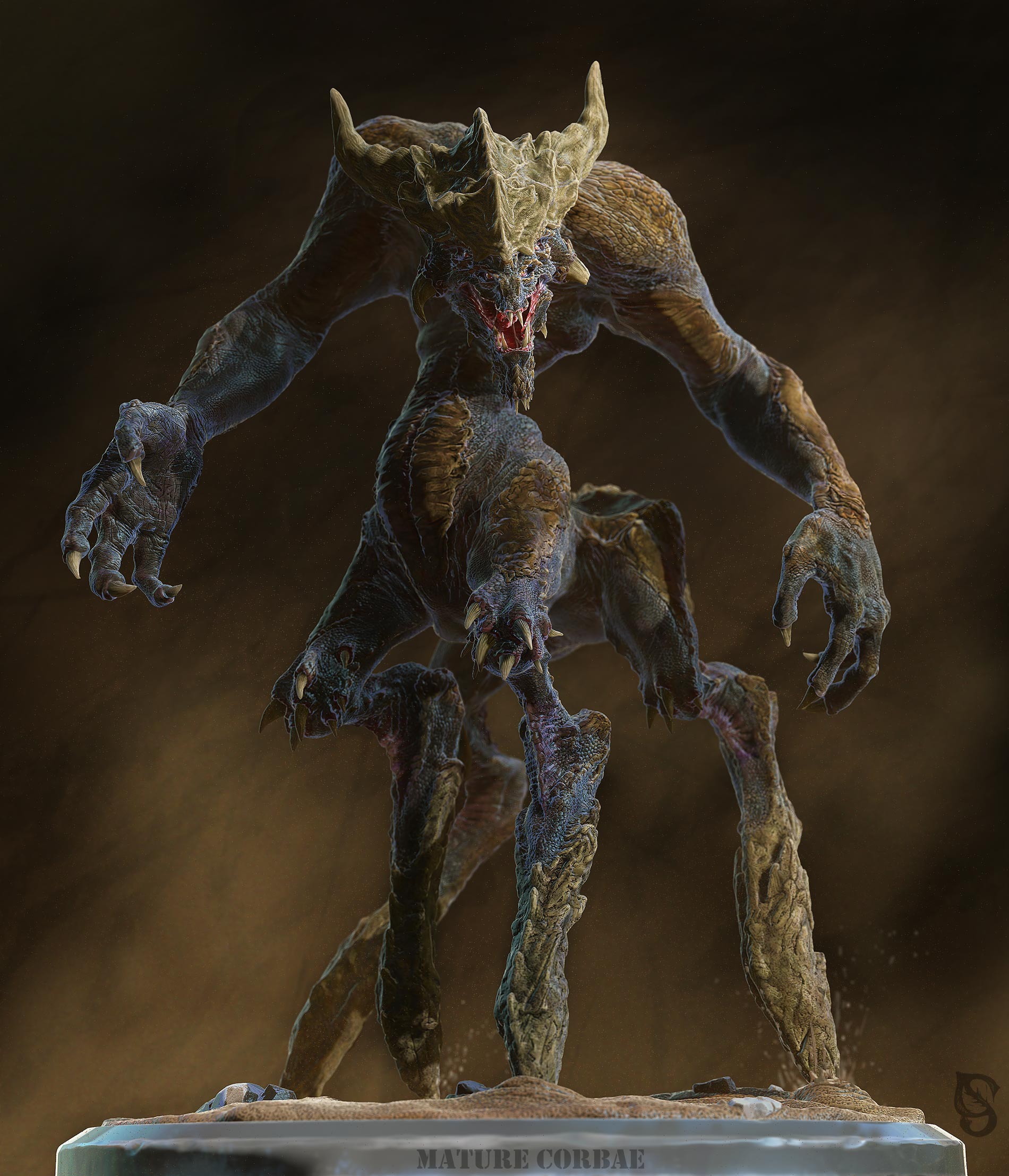 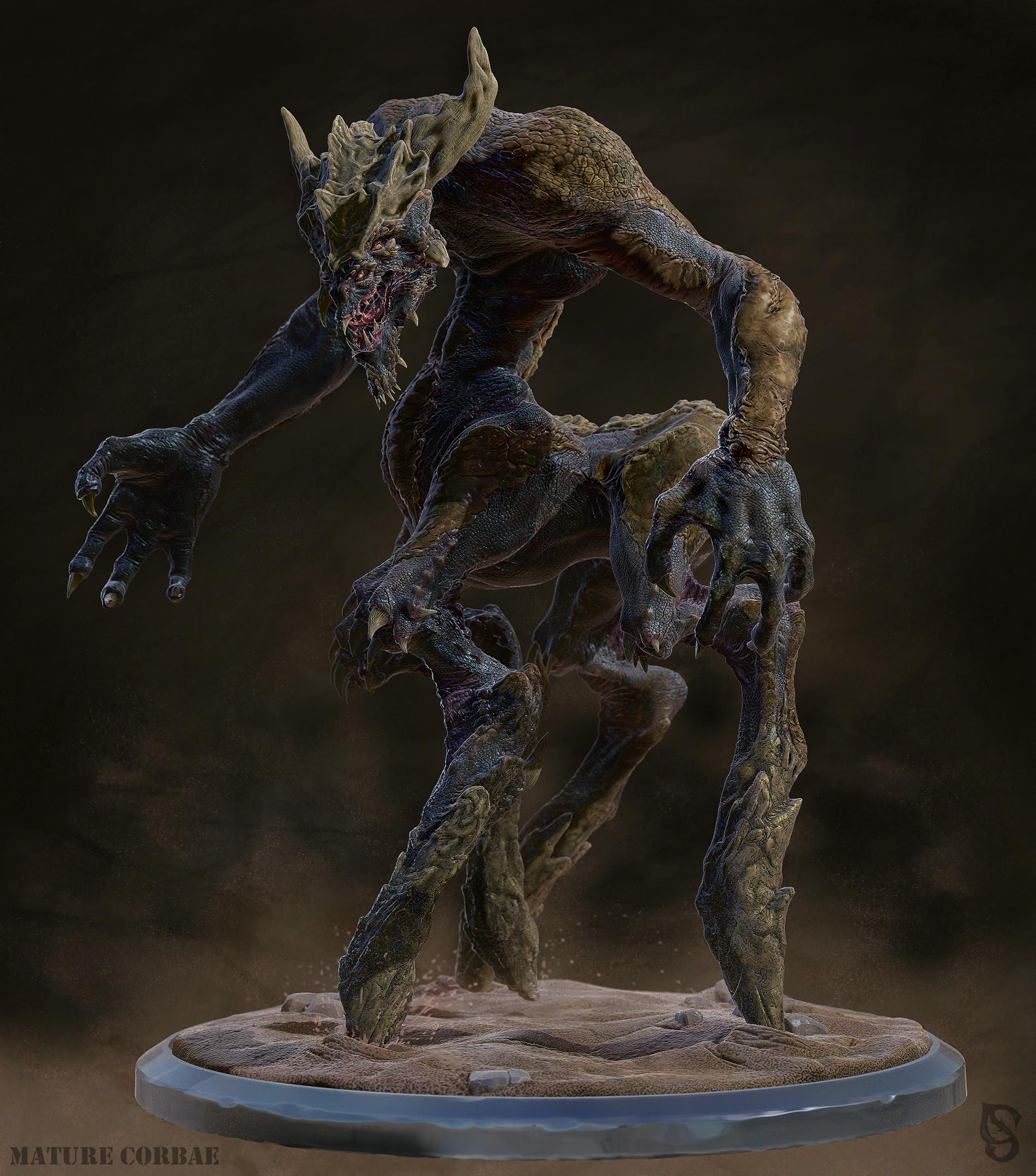 Wow, thank you both!

Here are a few grab docs/screenshots in Zbrush of the un-posed model. No materials (everything is just using fast shader) So its just a bit of sculpting and polypainting you can see here without any real surface qualities. Here are a few basic renders with no painting - just using SimpleMaterial2 to un-clutter the sculpting. this is great all around. Rendered in zbrush?

Yes it is just a few zbrush renders and a simple comp in photoshop for the full image ones. The second post with fast shader is just grabdocs and the ones without polypainting are just a quick BPR with a slight depth of field through zdepth. Thanks for your comment!

Thanks Rosemaryr! I just started my next personal project and like it a whole lot better than this guy. Got a whole chunk of lore drafted up in my mind for its setting. I’ll post some WIP stuff in the near future.

I’ve just started my next personal model which is based off a few older sketches I had and a concept and setting I have just formed around it. Bit too much to explain but maybe I’ll try to condense a few bits of it when the model is final and I put that up.

I just started so this is simply the initial blocking stage on the body of this character - Ninnaya, the third Scelera. I’m just experimenting a bit with a few shapes at this stage and getting a sense for this sort of bark that I want to create. It may be a bit noisy at the moment with the loose freehand experimentation to find a few shapes but that will be resolved as time goes on. Its just a low resolution mesh at the moment for poking/playing with.

I think she is off to a decent beginning - but it will be a long road ahead to bring her to a complete level. I hope to make a full scene in the future with this and the next few personal models I do after some anatomy study. This was a fast experiment with quick sketch shortly after it came out. Been wanting to make her for a long time - I’ll be using something similar for the head, though less dark/angry looking and not symmetrical as this sketch was. Here are a few more quick screen grabs of a bit of progress. Been busy but I’ve begun working on blocking in the bark. I didn’t want the bark to look simply like an ordinary tree bark, but rather sort of intentional. I wanted it to seem as if strips of living bark had sort of slithered over her and around each other and hardened. Long ways to go - but a look is beginning to form for the bark. Love your stuff man, what technique are u using for the bark? It’s very interesting.

To begin with I created a simple bark like structure from a dynameshed cube, from there I duplicated it and edited it quite a few times to get various shapes and feels and used qremesher to get their poly counts down. I created an insert multi mesh brush and began laying in and warping pieces to fit the sketched body below while scaling rotating, making broad movements and curvature adjustments with move elastic and often some tweaks with the swirl brush.

Once its all in there will be a refinement pass to fix oddities, replace certain pieces and create more of an over all flow as its a process I got better at from when I started it. Was my first insert mesh brush so I was sort of learning that as I went. I’m creating sections of bark as different sub tools to get better performance and the ability to smooth without my computer exploding for a future detail pass.

Once the blocking is done and other parts of the model are in place I’ll do a detail pass. Whatever detail exists now is just from the insert meshes but to break out certain areas and knock back others I can do some things later on.

I’ve been busy and she is a very involved project but I’ve put some time into her recently. Just posting a tiny update.

The projections from her head will become branches, so no they are not horns in the usual sense even though they seem that way right now. I had put off doing the head for a little bit because of the difficulties of striking an appropriate balance between human and non-human. She was once human, and the face carries the most recognizable remnants of that - though still largely transformed. The seed sits in her forehead, and will eventually be glowing and giving off various effects which will create some illumination inside the hood and enforce the head as a focal point.

As you can see, long ways to go. She is tricky as there is 0 symmetry to her and she has tons of branches and twisting forms to deal with. I’m pleased with the direction beginning to emerge however. I really like what you are doing with that tree thing.

Wow, this is beautiful work!!! Like others have mentioned the detail put into this piece is amazing. I love the detail of the bark, the depth you have achieved with what looks like the clay brush. The fact that you have worked this out without symmetry is also fortelling of the long process you are taking, but the reward is the artistic quality of the piece…amazing!!! I have wanted to go back to making trees, tree spirits and people gestured in tree shapes and nature. I have started a Old Wise Tree which was inspired by the Deku Tree from The Legend Of Zelda, Alan Lee’s work on the Ents for Lord Of The Rings, Brian Froud and so on… I started a Green Man and have various concepts of Tree People that i have done in pencil. I think that the new ZRemesher will help in that process plus your project has given me some new insight on how to achieve those goals. Thanks for the inspiration and i would hope that you do not get burned out on this project because it would be great to see your final vision…

@Fynn - Thanks! I surely will - it will just take time as I can’t work on it exclusively.
@Monstermaker - Thank you!
@remcv8 - Thank you very much for your compliment! The detail is just beginning - I have to work the whole thing to a certain level before I consider touching fine details. As it stands, I might make that pretty subtle in the bark as there are already so many lines and while I will do things to knock that back in the final result I have to be careful that it does not become overwhelming. I have an image in mind for where it will go when final and I hope to reach it. Thanks for the motivation! PM me if you ever post the one you are working on/wanting to work on - would love to see it.