The Action Hero Contest may be over, but we’re not done bringing you good stuff from it! This week is the third of five “Making Of” articles from the top winners, highlighting pitchepuck and his creation: HedgeHog. Martin’s WIP thread can be viewed HERE. Now we’re pleased to be able to bring you a detailed walkthrough of his techniques as he worked on our Second Prize winner. Martin’s approach was a bit different, since he actually posed his character early in production. Also, the materials that he includes here give great info relating to lighting in ZBrush.

Concept
When I started the concept I thought about a typical old school hero design in MARVEL style. He should become a realistic style like the actual movie heroes, too. Then I thought about his theme. I wanted to take a pet symbol like Batman, Spiderman…

I don´t know why I got the hedgehog in mind but this pet was never used as a hero theme exept for video game figures. With this theme it was easy to work out the design. I took the typical hedgehog design elements for the first concept ideas like color, quills and skin structure. But the design was not complete with this beginning! I wanted to further develop it during the sculpting process.

Base Meshes
I took my standard basemesh for human bodies with which I start most of my human sculptings. It was originally built with ZSpheres. Then I rough sculpted to redo the topology in ZBrush, except for the fingers which I extruded in 3ds Max.

Before I started to build the suit parts and armor parts I had to do the first sculpting on the body base to get the right proportions. After that I began to build the other parts like chest armor, mask, gloves, boots and belt. All these parts were created with the Retopology feature on the body base. I drew the new meshes for all parts and gave them thickness.

For some details on the boots, belt and glove-armor I used 3ds Max to extrude some poly areas. After that I reimported these base meshes back to ZBrush.

The quills and eyes were made from ZBrush´s standard parametric objects.

First Detailing
I did most of the detailing after posing the body. Before posing I only did low detailing on all parts.

First of all it was necessary to get important rough details with symmetry on the face and body. All the fine details like folds on the suit and the fine structures and stitches were sculpted later.

The pictures show the details I sculpted before posing the body.

The symbol on the chest armor was created with an Alpha Mask. This Alpha texture was created ahead of time in an external graphic program and then imported into ZBrush.

The wood color and structure of all armor parts was projected. I put a Plane with the wood texture behind the armor SubTools and then used the ZProject brush (with Zadd turned off!) to transfer the color. To give it a structure I used the Auto-Mask option of “Mask By Saturation”.

Posing
Posing was quite easy. I had the exact pose just in mind so I didn´t need to make more than one.

I didn´t need to rig the body with ZSpheres. Most of the posing I did with the Transpose Master. It is important to make a lot of Polygroups, especially on the hands and fingers. This makes it easier later on when the fingers are close to each other, because with the Polygroups you are still able to mask them separately.

Detailing
After posing was done I did some corrections on the body and started sculpting final details. (This was the point where I thougt the contest would be almost over. But I had actually one month left!) Now it was time to pose all the quills on his back and arms. I had enough time left to think about new details like the leather-tapes and other little stuff. And I had a lot of time for the base!

For the sculpting I used several brushes. I did most body corrections with the Move or Elastic brush. The folds were sculpted mostly with the Standard brush and a different Alpha (Alpha 39) on it. The stitches were sculpted with the Stitch3 brush and the LazyMouse function.
Some of the stitch lines were made with a custom-made Alpha consisting of a single stitch.

The suit structure was sculpted with one standard Alpha (crossed lines) for the leather-look and one custom-made Alpha for the textile parts. Notice that most of the fine structures were done after the main sculpting was finished.

Colors and Materials
During the whole sculpting process I was also searching for the right color design. I tried several approaches and different combinations of materials an colors. I think this is important because both combine together to cause the final surface expression.

The skin color was taken from a photo reference. I painted the face with the ZProject brush.

The leather suit was painted with several techniques. First I put a base color on it. Then I worked out the fine structure a bit. This was done with the automask function “Mask By Cavity” to darken the surface structure-depths a bit. Then I highlighted the higher edges with a brighter basic tone. Finally I toned down the lower surface areas to fake a little ambient occlusion. All this was done with the Standard brush and several Alphas on it.

The materials were all standard materials. I didn`t use any MatCap materials, which usually look better at first but cause some problems with lighting. (They all have a light map which makes it hard to play around with light settings.) On the other hand, the standard materials are directly affected by the lights, and in fact all in the same way! So, in my opinion don´t use MatCaps.

Sculpting the Base
I wanted to create a street-fighting scene with typical elements from his area in Tokyo. I also wanted it to look dirty and wet like typical fighting scenes from dramatic movies.

First I researched pictures of Tokyo´s streets. Unfortunately I couldn´t find a picture of a manhole cover, so I took a European one. The fire hydrant is an original one from Tokyo.

The manhole cover was first sculpted separately with Radial Symmetry on a Plane3D primitive. Then it was projected on the ground. This gave me the possibility to search for the right position without getting an extra SubTool and a higher polycount in the end.

The water plane was not projected because of its different material.

For the street structure I used an imported Alpha texture.

The bottle and the hydrant were built with ZBrush´s default 3D primitives as you can see in the pictures.

Lighting
The lighting was very important for me, so I spent a long time testing out the lights. In the end the scene got four lights.

It’s important to know that the light positions are fixed relative to the canvas-space. This means that the lights stay when you move the object on-screen. Because of that I had to find the final position for Hedgehog before I posed the lights.

I positioned the lights using the “placement” option, except for the Sun light. You can see all custom-made settings for each light in the pictures.

Rendering
The render settings were just the standard settings. I only used some dark fog in the back - that´s all.

We would like to thank Martin for his participation in the contest, and taking the time to put this article together. Watch over the next couple weeks as we bring you the final two top entries in our countdown to the Grand Prize winner. There’s still a lot of great info on the way! 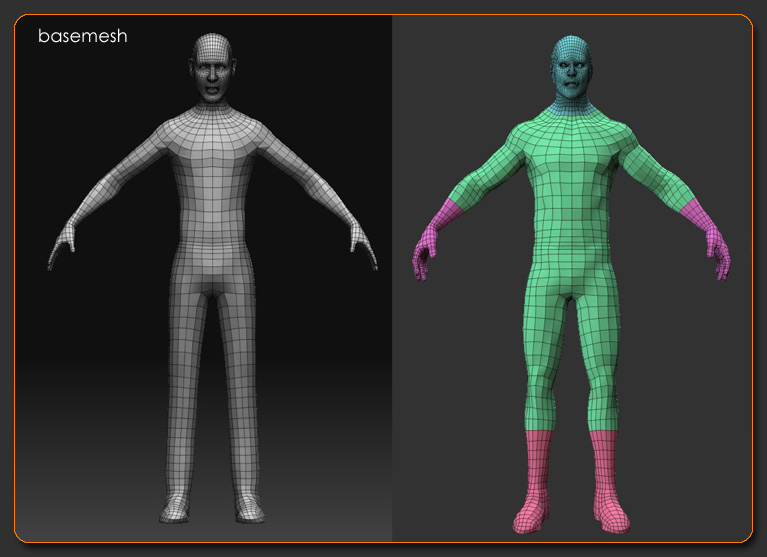 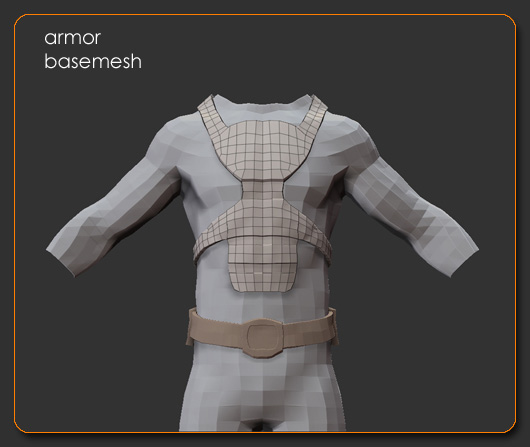 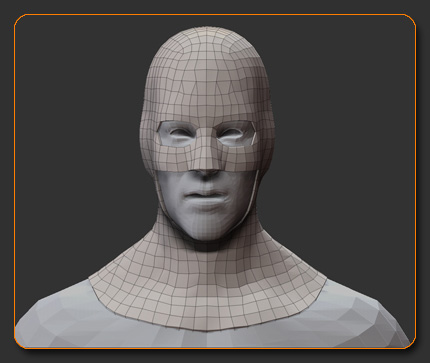 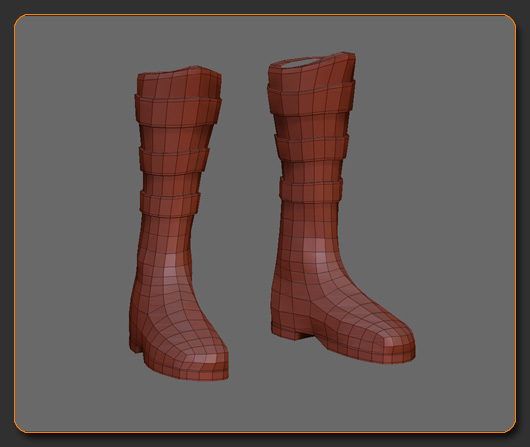 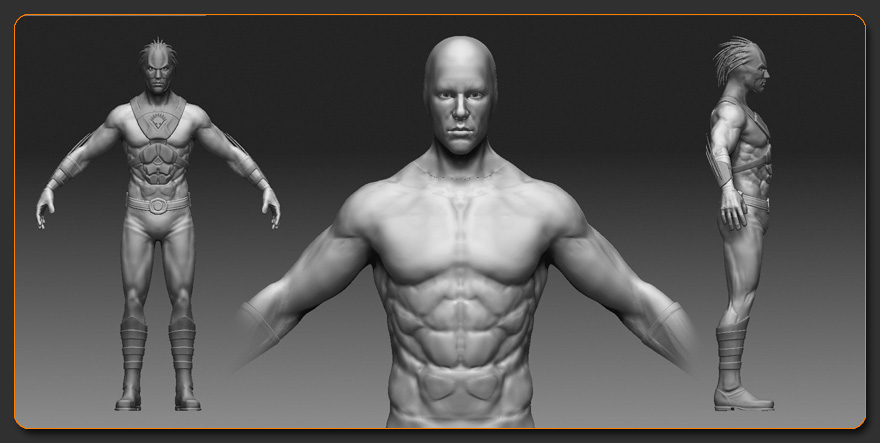 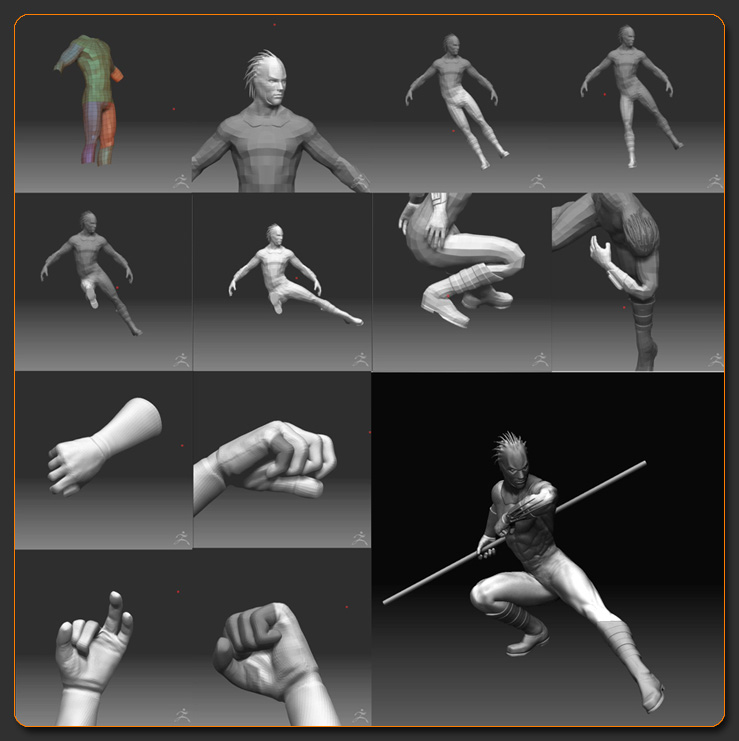 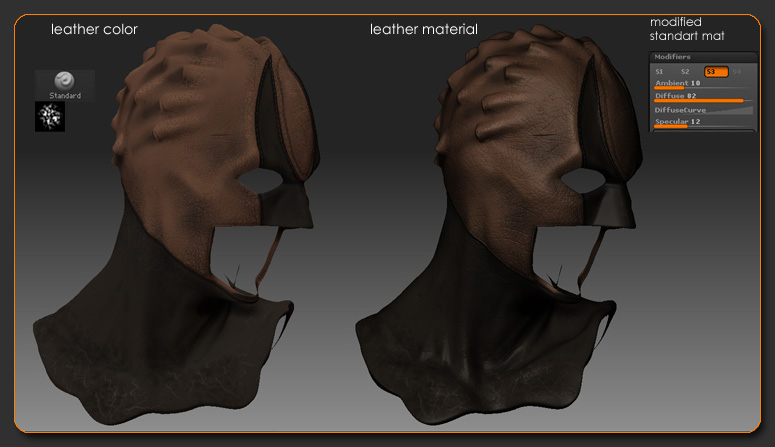 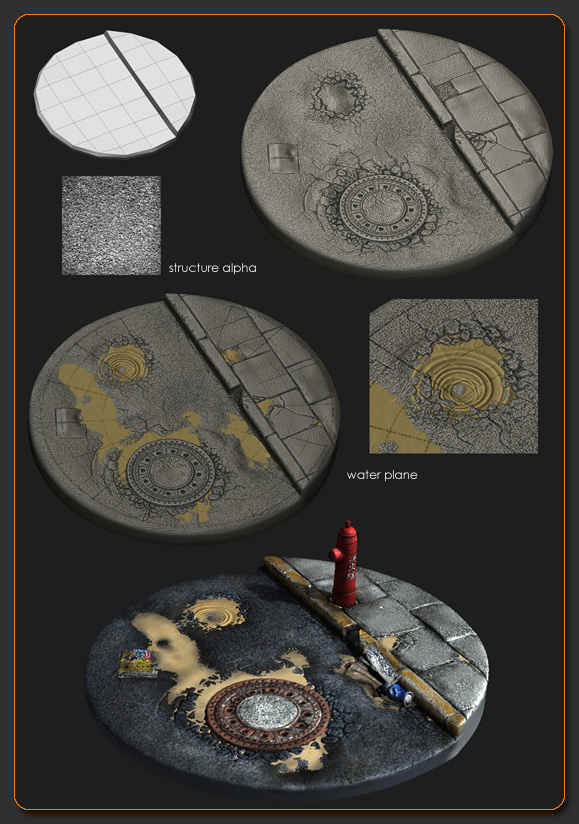 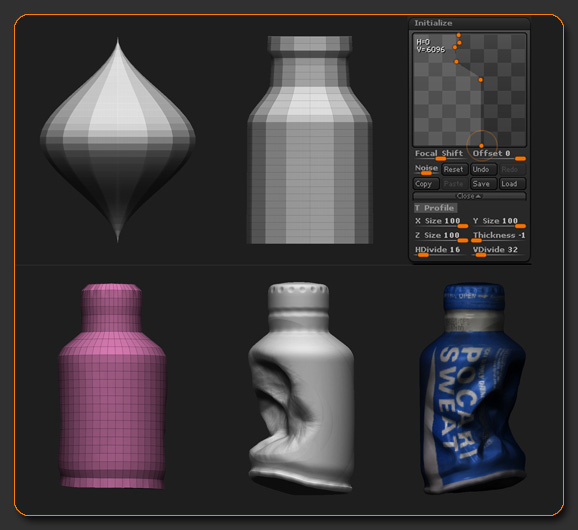 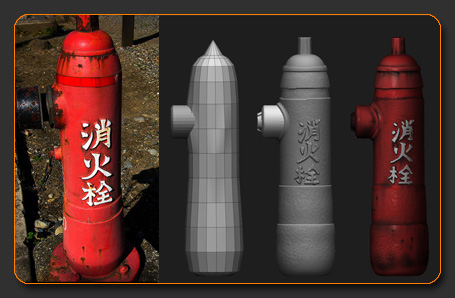 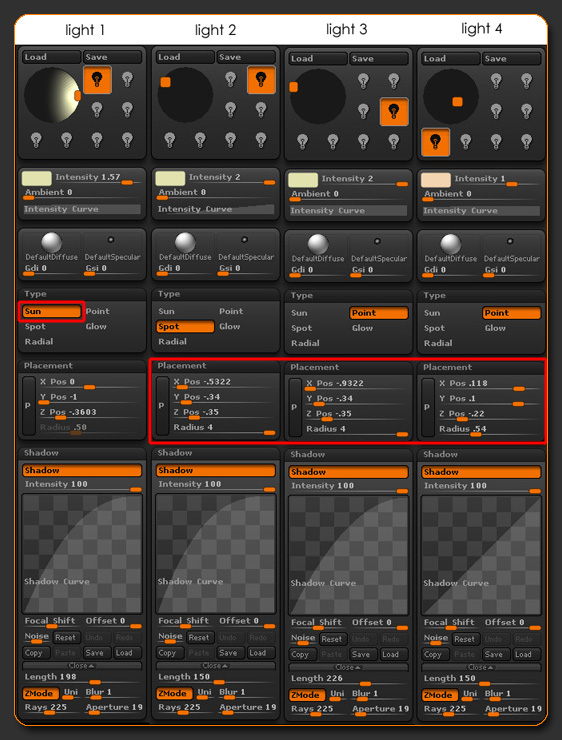 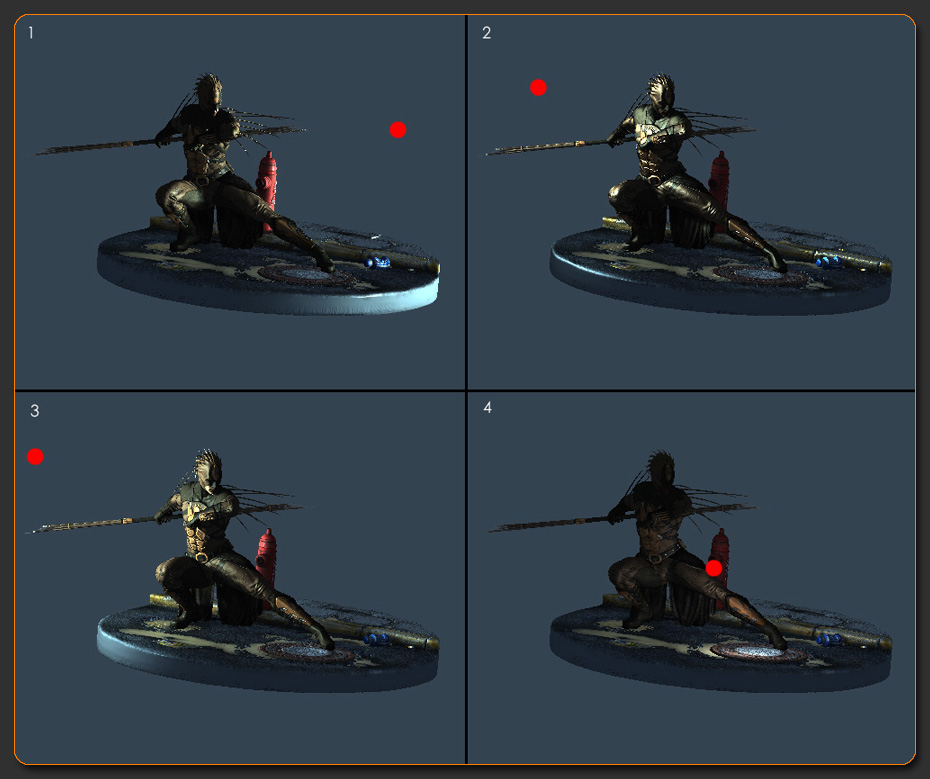 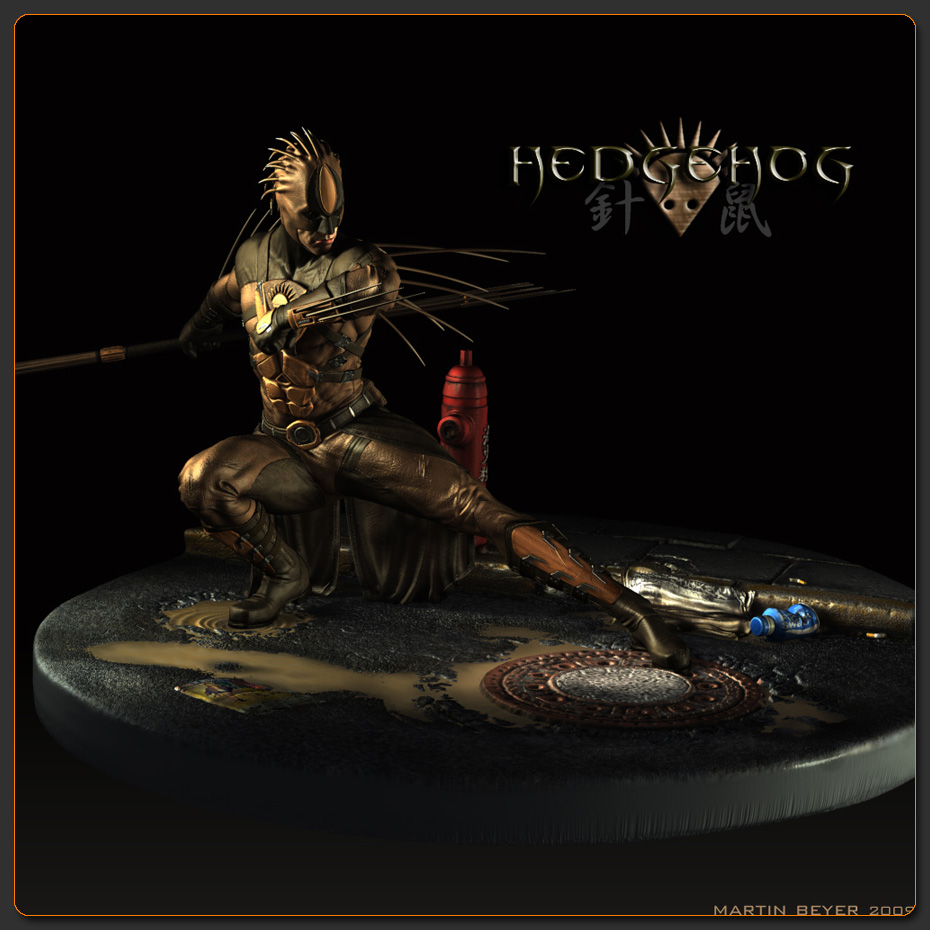 Maaaartinn, as you can see, the first post is written by Moni.
Your fault if my food starts burning!!!

Many thanks for the help and support – in german!
Hedge-Hog is a fantastic character !

Thanks for this great and informative article.
And congrats again for the second price! It is well deserved.
See you later - LIGHTNING.

Edit 2: Oh, and many thanks for the light-settings.

Well, I didn´t know it´s possible to have more than one light in a scene. :o

great work on mesh, textures, and lighting, but i don’t like much posing…

this is great, thanks for sharing.

Amazing work…the stance screams martial art…the base gave me an insight to how you guys work on them…everything about the process you’ve shown is really inspiring:D Cracking stuff !!

you got my vote pitchepuck…i really liked this character.

Thanks for this amazing making of Martin!

Love the result of the final rendering! Great work of lighting!

Go Hedgehog! Thanks Martin, it’s great to see your techniques.

Hey have you gotten your 3d print yet? I’d love to see some photos of that.

Great making of. Thanks for sharing. I struggled with lighting and it’s good to see the kind of set up you put into place. Amazing work

Hi Pitchepuck! Congrats on top row! 5 stars from me on a beautiful sculpt! The walkthrough is awesome, thank you so much! Lookin’ forward to seeing the print as well

awesome making of!!! really well done! thank you very much!!!

Very very goofd work, all this in zbrush? excelletn workflow

Pitchepuck, thanks a whole lot… especially for your detailed explanation of the use of materials, no matcaps… wow …and for dissolving the mystery about zbrush lighting/rendering… you showed that the whole thing can be done in zbrush… brilliant !!! my hat off to your creative genius…

Thanks for the awesome tutorial Martin!!! Your character was wicked-awesome man! Loved it!

All the best to you!

this was AMAZINGLY insightful! thanks a lot for such a detailed look at your workflow!

I love getting an in-depth look at an artist’s process like this - it’s very inspiring towards my own work and often gives some new ideas as to how to approach things.

one question that I haven’t learned yet: how do you set up your own custom polygroups like you do? I’m sure it’s relatively easy but I haven’t done it before just worked with what I got out of the program.

Very, very nice work! I enjoyed you sharing your workflow here on ZBC. Every time another artist shares their workflow I know that we all improve our own. Plus, the rabid inspiration from posts like this one infects everyone (muhaha).
Gary

I´m happy that I could help you… and I´m waiting for the next 20 questions :mad:

@ poligonmaster
thanks! and nobody is perfect

@ agent enigma
thanks. I m glad I can help you with this making of!

@ mind symbion
thanks! yes the light was important… hope this ´making of´ can help you

@ captainS
thanks man.
yes I know that a lot of people get in trouble with the light and shaddow settings. so I desided to show every detail of my sets to help you

thx man. yes yes…I´m waiting for the print too… I´lll let you know when it´s here

@ vedanta
wow :o thanks man. I´m glad that this making of could help you!
and ZB is no mystery

we have the power! :lol: schakkaaaa

@ chindian
many thanks. I see the work was not for nothing

the best to you too.

@ b2przemo
thanks. glad I could help you!

@ liam H
thank you!..
the polygroups are done by hiding bodyparts and then group the visible polys

@ hyper
thanks gary! nice to hear that you enjoyed this.

Congrats on top row! Very cool to see, and incredibly helpful. So glad you took the time to show your stuff.

I love the posing and the lighting, they go very well together and give a dramatic feel. Although the Pocari Sweat was a very great touch.