Hello I started this écorché project in order to learn anatomy. i started by blocking the skeleton made 100% in zbrush. looking forward for some C&C. 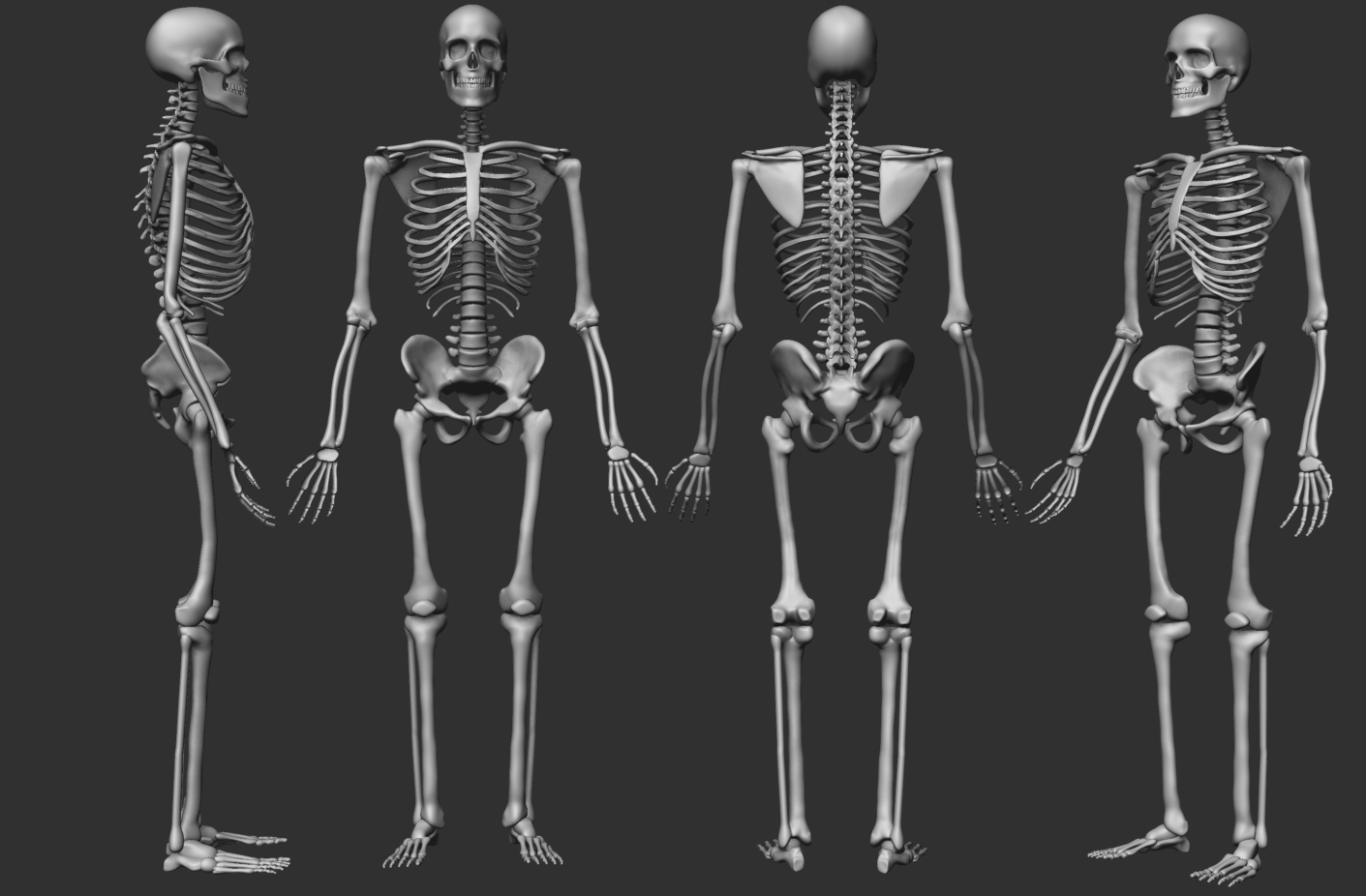 Thats a good start you have there. I’m not sure how detailed you want to get but there are some things that stand out to me. The rib cage shape should be a bit more like a egg shape with the narrow end point facing up. The ribs don’t typically attach to the xiphoid process. The Xiphoid process sits below the last connection where the cartilage connects the ribs to the sternum. The xiphoid process should be much shorter. The kneecap (patella) is more of a rounder shape. There are more things that stand out but that is a start to help out. When I worked on my skeleton I had to spend numerous hours looking at reference from all angles and I still can see areas needing improvement. My best advice would be to keep looking at reference material and when possible find actual skeletons to review vs an illustration interpretation of what the skeleton looks like. Try to not get too caught up on the differences that we all have. Its hard for some of us artists when we want to make something perfect, and there are so many variations to choose from that it sometimes slows you down, and you just want a definitive answer like a blueprint to work from. Good luck on your project. It is a lot of work but very rewarding, and can help you greatly with landmarks and anatomical terminology if you stick with it.

@Daniel Biggers: thank you for your comments, i tried to address them as best i can, still trying. I am not looking to detail anything until i block in all the skeleton and muscles, then i can worry about detailing. I am constantly looking for references and for the “blueprint” you told me about. It’s hard to come by extremely accurate anatomy.
I blocked in most muscles using insert mesh and zmodeler and dynamesh. I am still trying to nail the proportions of the human figure (using Tpose plug-in). I still have to add the hands, feet and neck muscles and i can move to the detailing phase to rake in the muscles. The face also needs tweaking. I will also transform this man into a woman, that way i can have both sexes. 2 birds 1 stone ey?
i think the step after this will be to make the actual skin on top of the écorché.
Looking forward for C&C! 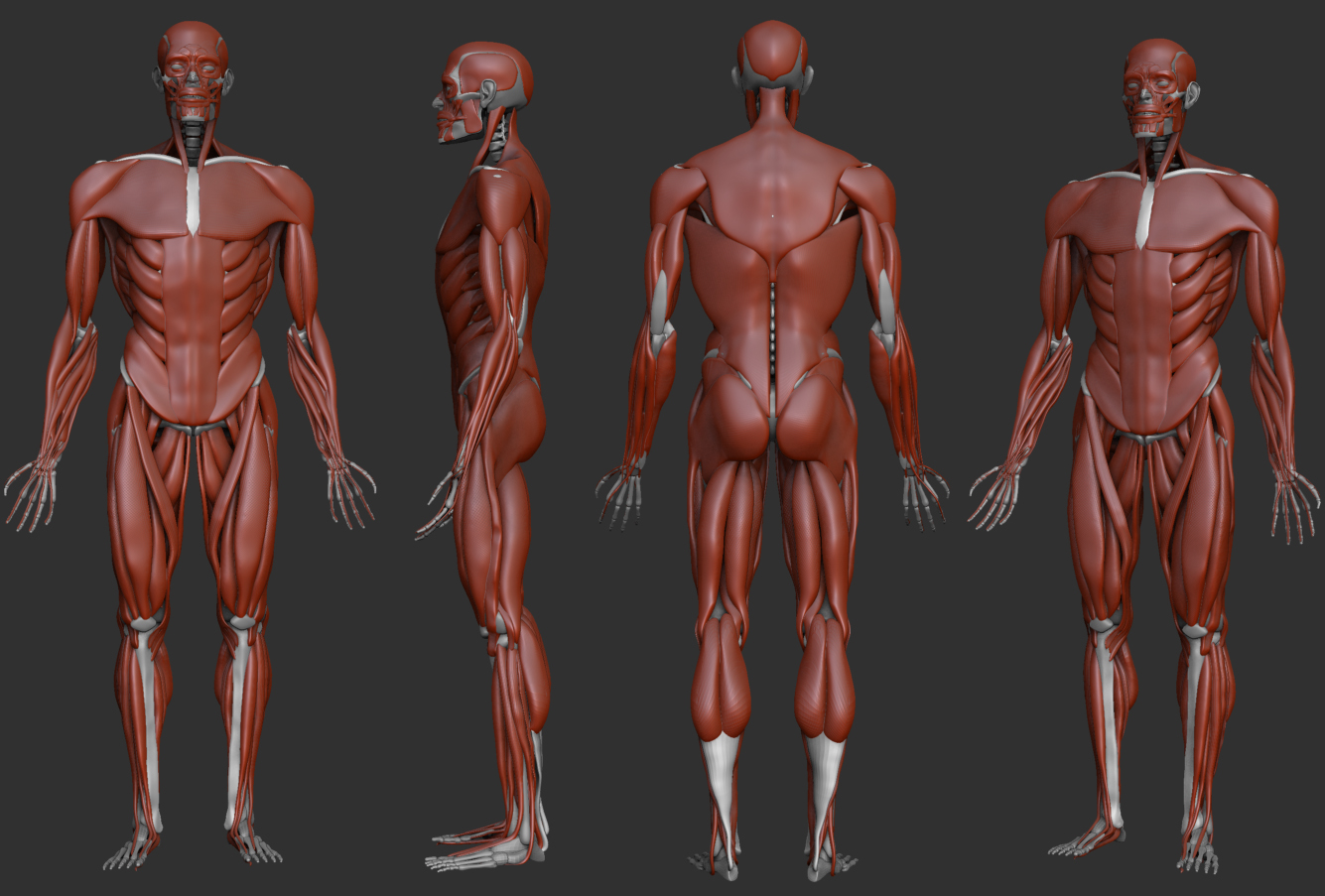 I was browsing the internet looking for examples of zbrush ecorche models because I am interested in starting my own sometime. As soon as I familiarise myself with zbrush.

Anyway I was having a look at your models and thought that I could give you some critique. Hope you don’t mind.

Daniel is right with all his critique for the skeleton. In terms of the model itself, I think it could use some more planar structures. Everything seems quite round and smooth. The skeleton has many complex forms, angles and planes and I think it is important to capture this. For example in the skull. These are some images from the Bammes anatomy book and a skull drawing from the Repin Academy.

A number of other bones in your model suffer from this as well (humerus, femur, tibia, fibula etc). Another thing, is that you forgot to model the manubrium seperate from the body of the sternum. They should be two distinct forms. I don’t know anything about sculpture and modelling, but in drawing, this is quite an important landmark in showing underlying form of the upper torso. The scapula could probably use some work too. I’ve attached more images from Bammes. For the anatomy, the thing that stuck out the most is the way you modelled the external obliques. The digitation of the obliques should not be seperate forms like that but they should be connected to its main mass at the bottom. They should actually be quite thin and just lay ontop of the underlying form of the ribcage. Another thing you are missing out are the tendons and fasciae. For example on the trapezius, there should be a hollowed out diamond shape of fasciae where the 7th cervical vertebrae is. Also for the vastus medialis, lateralis and rectus femoris, they should connect to the knee cap with tendons and not directly.

Having a quick glance around the model, it looks to me like you’ve left out the brachialis and anconeus muscles on the arm aswell.

Sorry for the long post, I hope you don’t mind

If you are interested in anatomy, you could pick up some anatomy books if you have not already. I recommend the Bammes anatomy book(I think this is only available in German and Russian), Struttura Uomo(I think this is an italian book), and Human Anatomy for Artists by Eliot Goldfinger. Some of my favourites for an in depth analysis of anatomy, especially their origins and insertions (very important!) and functions. These books aren’t very artistic though and are more on the technical side of things.
I hear Artistic Anatomy by Paul Ritcher is a good one too but I personally don’t have it.

Here is an update.
Thank you so much MatthiasChua! Your references have helped me alot especially with the external obliques and the sternum clavicle relationship! I’m still going through your post and Daniel Biggers’s post to keep on the right track

Im still missing stuff but im learning and discovering as i go along.
By the way MatthiasChua im going to learn all the books u recommended to me, thanks for that!
P.S. planning for printing 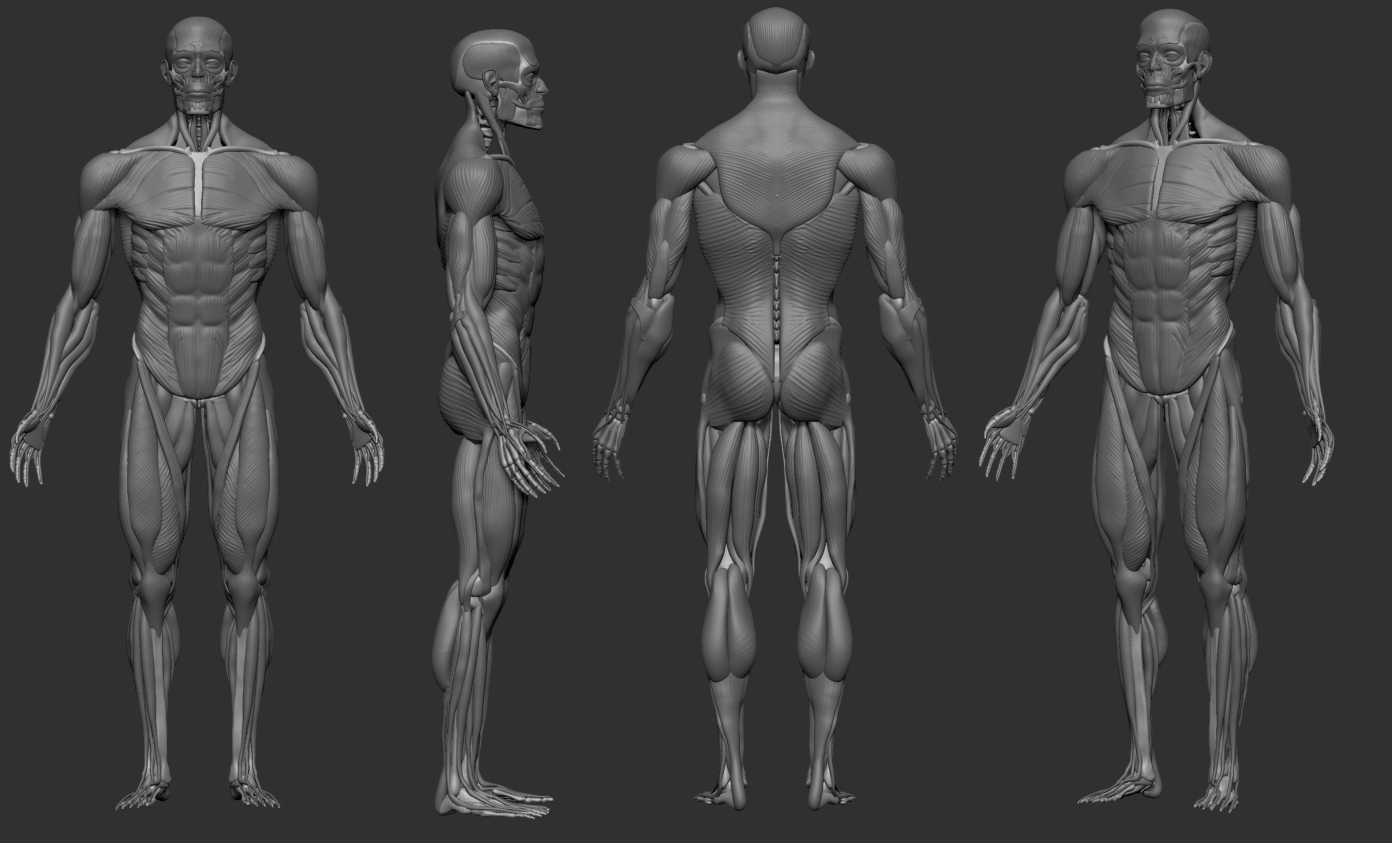 It’s good to see you are still working on this project. Keep us updated with pictures, and keep looking at reference material, not even a Dr. could do all of the systems from memory. The Zbrush community can be a great place to get info from others and it has helped me out as well, so keep posting along the way, and good job on the hours you’ve spent so far.

For the crits I would say look again at the serratus muscles reference and how they should look like an oriental fan from the side. They do not line up in a vertical line, and they are not as apparent from the front view since they tend to go off to the side more from the diagonal angle they make while curving around the ribs. The achilles tendon should narrow a bit more leading up to the Calcaneus (heel bone) and the insertion point is at the mid back section of the calcaneus.

Also a great source of help for me on the forums here came from Alexander Kafoussias in his Anatomypunk thread.

After a month of blocking in the major forms of calcium and proteins, ive started with some detail passes on cranium radius ulna humerus clavicles and scapula. had to remodel the thoracic cage 4 times LOL i think i will remodel it some more times yikes
@Daniel Biggers: wow the ecorche assistant app is amazing! so much details!
im gonna worship ecorche assistant by Alexander Kafoussias!

Its looking better. Take another look at how large your collarbone is near the manubrium, and the collarbone should attach towards the side. In the model it appears to be behind the manubrium. I also agree that there should be some separation of the manubrium as a landmark for the sternum, you could make it a separate piece as I did or just use the dam standard brush and carve in the separation line. The forearm bones are looking better but still require just a bit more work. Take a look at the attached images. I know you must have some reference of your own to get you to this point and it may vary a bit from the images attached, but they are a good reference to compare to. Both images attached are from the right arm.
The first image is with the arm out to the right and with the thumb side up showing the lateral side (the side away from the center off the body). The second image is with the posterior (back side) of the arm on the x ray table and the thumb is to the right showing the anterior portion of the arm.

Notice in the first image how the ulna is almost straight with a very slight bow in it. The radius from this x ray is also pretty straight as well once it passes the radial neck. The second image shows the bowing out/curves of the two bones. Also you may have it in there but make sure you carve out a section where the ulna and radius meet (near the wrist) since there is a grove in the side of the radius that the ulna sits in. I hope this helps. @Daniel Biggers I have a seperation for the manubrium in the sternum but its not showing, i premodeled it with edge loops. As for the collar bones i still need to tweak them. And WOW those XRays really hit the spot! im still analyzing and understanding the humerus ulna radius structures and fixing them as i go. Really cool XRays
How do you make your posts so big? 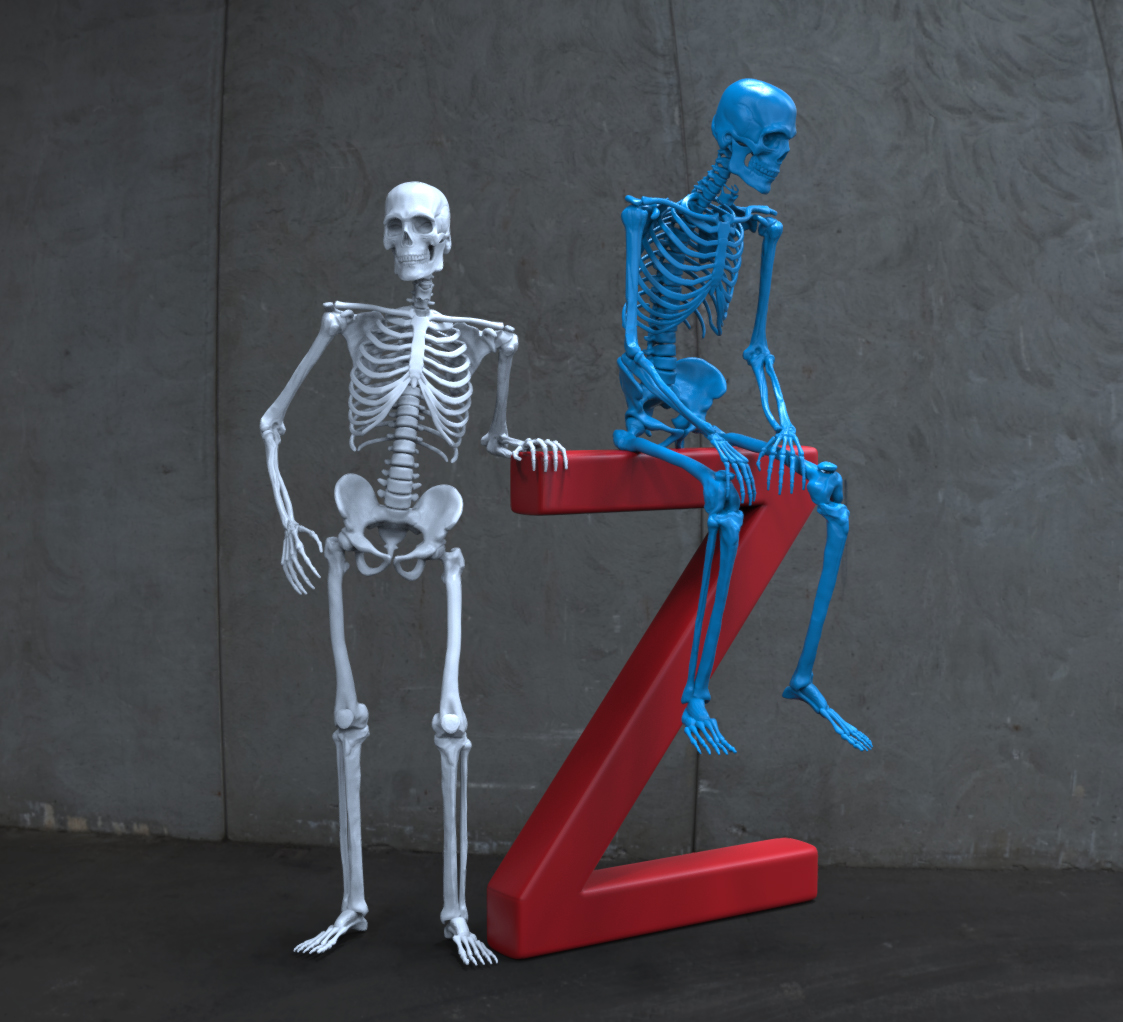 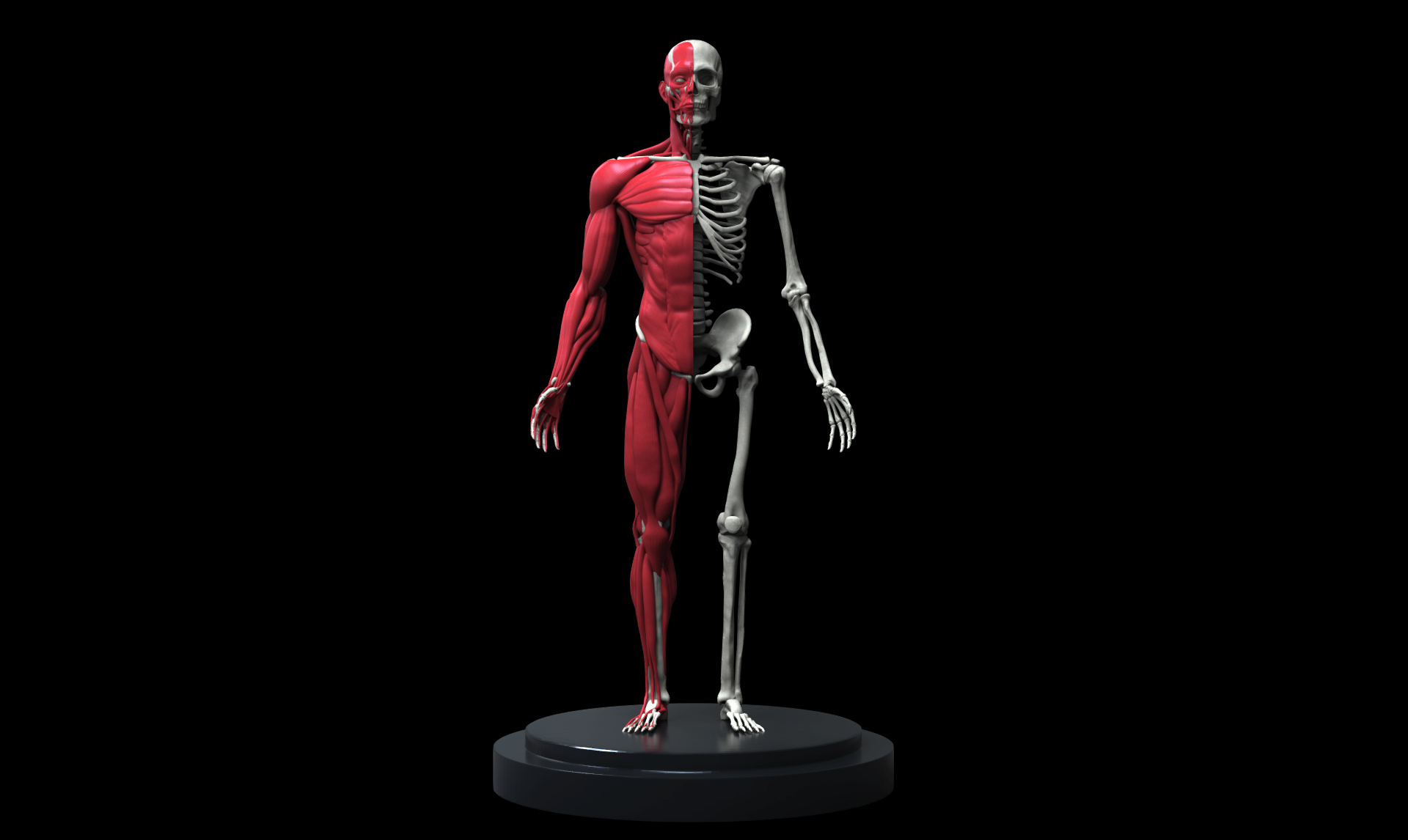 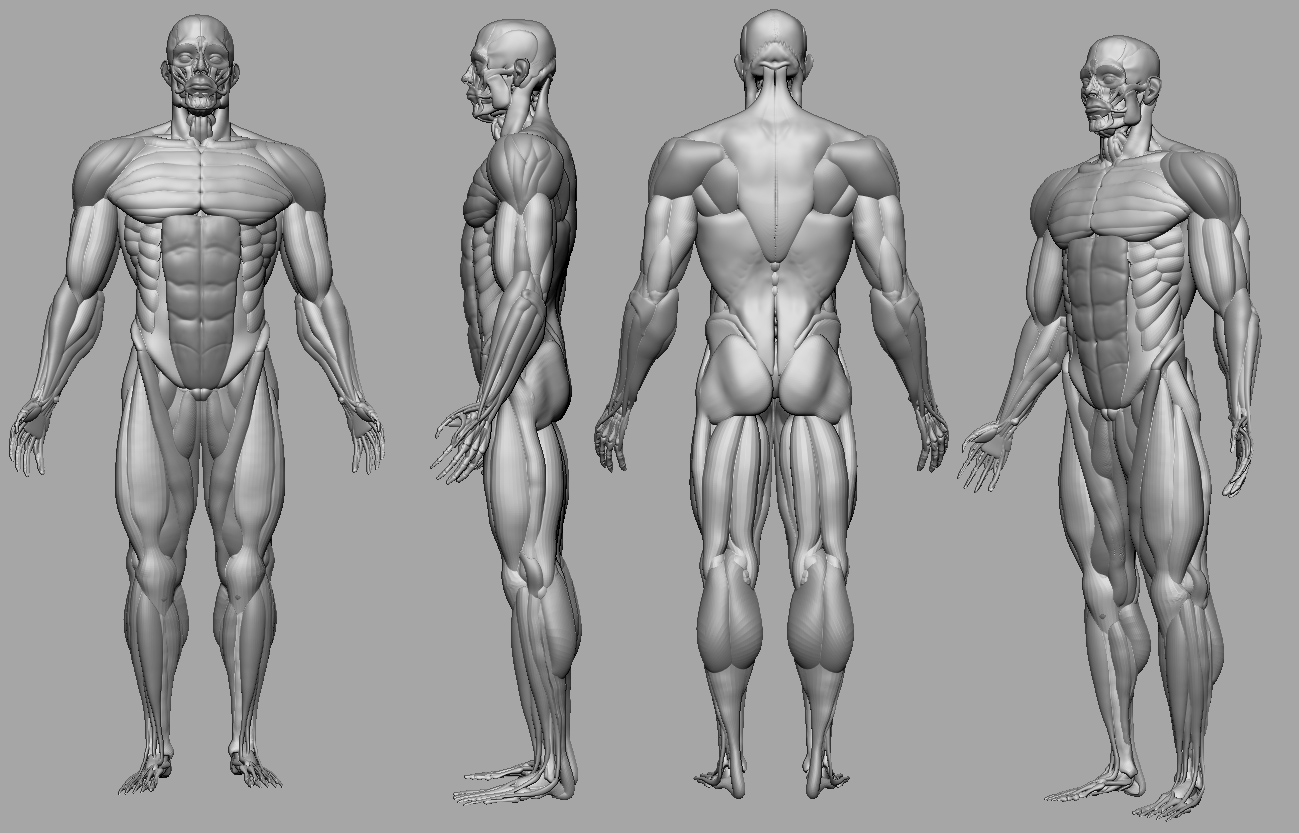 so i took my ecorche, tposed it into what could be a worgen and then retopologized it.
sculpt on… I feel like the head should be a little bigger. Nice work.