After viewing some of the great work that is starting to come out of this thread, and Lemonnado’s suggestion, I decided to start this challenge. No restrictions or time limits, just post your biggest & baddest zbrush space scene!

You can use the z-ship tut if you like to create ships or space structures. Have fun! - J

Here’s one I started inspired by Sparth’s End of Grotto concept illustration:

hey that looks pretty good. BTW can u tell me how they do the lights in such scenes? You know, all these little bleeps and blops one usually sees on such scenes? Would that be handmade afterwards, or done texturewise?
Thanks.

E.
BTW i think you should continue with this one. Its got potential really. The overall composition works quite nice in this image.

Usually a texture and the lights are not lights but materials with the ‘incandescence’ parameter set on a texture. Here a sample:
[[attach=27513]incan.jpg[/attach]] 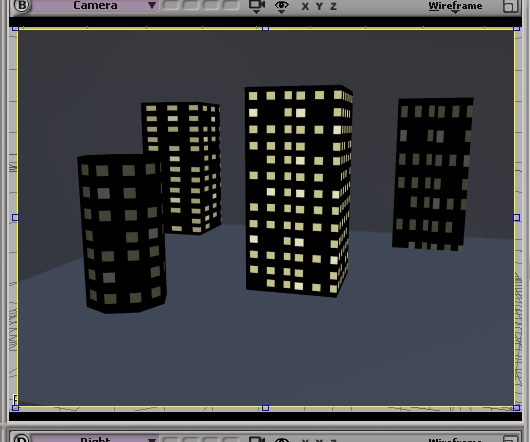 All 4 geometries have the same texture applied. On two of them the same texture has been re-applied as incandescence map and set to a higher intensity than 0. The result is a glow without halo… yoiu get the point… It’s simply brighter and offset to the surrounding lighting.

I have no clue how to do that in ZBrush but the glow material and layers come into my mind. Once you know the idea, it should be fairly easy to reproduce the effect in ZBrush. Use the allmighty Zeeble tutorial to create a black texture with lit square windows and use that on geometry with the glow material. That should work. However, have not tested that... Cheers Lemo Update: Yup, ZBrush Glow Material does the Job. Can be nicely tuned with Glowradius and intensity in the material. [[attach=27514]ZBglow.jpg[/attach]]![ZBglow.jpg|689x537](upload://grT5NBssyXrcLjYw2wln8uw6kH6.jpeg) 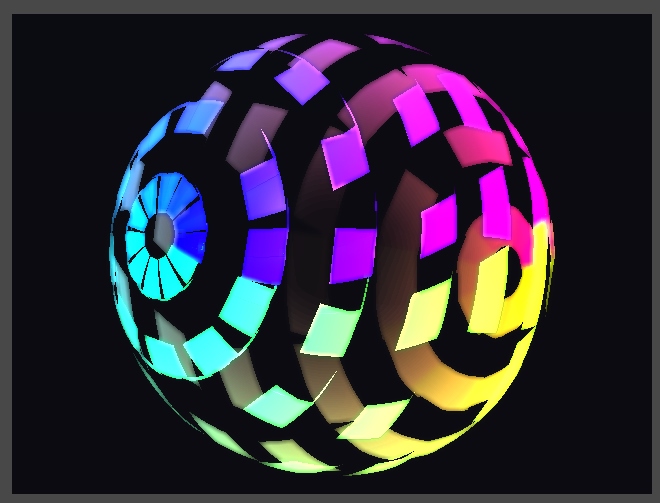 Awesome Lemo! I was trying to figure out how to create lights on a ship last night in zbrush without breaking down and adding them in a sepereate program. The last render has a nice smooth glow that could be especially useful. I dont think it completely possible to get the desired effect in zbrush alone without some post compositing but your last render definitely turned a light on in my head (no pun intended)

Im so looking forward to the weekend. I have some nice ideas going for a layout and I’m going to try and finish my first zberush concept art piece using the space theme.

Here’s something I pieced together last night:

Im going to give it a shot and see if I can fill in some of the darker squared out areas of the ship with the light glow trick. - J

You can try and take the original zeeble texture you used, invert it so the formerly dark parts responsible for the deeper pockets become light and apply that as texture using the glow material as material… Or make a texture with a pseudo reflection to mimick the metal look and then blend that ‘glow’ texture into it with PS…

PS:The combo of those techniques and tricks leads to the best looking space ships I’ve ever seen. Modeling your ship in XSI from scratch would take AGES.

I’m stuck at work, frothing at the mouth waiting to try the glow trick out. I cant believe I didn’t think about inverting the texture! Seriously bro, you are the man!

As far as modeling goes, aint that the truth.I couldnt even begin to fathom how long it would take me to try to build something like this using traditional modeling.

Thanks again for the advice! I thought I’d do somethiing late last night (early this morning) while I was waiting for an email. Stars were comped in in photoshop as I was too lazy to find the image while in zbrush LOL.

Ooopsss I confused the SpaceMan… sorry for that…

Glow Material is simply the ‘GLOW’ material in the material browser. Nothing I made. It has to sliders in the S1 section which allow you to tune it in brightnessss and glow/hazenesssss.

Then GlowTexture is a made up term for a high contrast texture consisting out of black background and some bright color specs. Like a Zeeble texture with black backround onto which you paint bright yellowish ,redish, whiteish, or everythingtogetherish squares.

Then assign that texture to an object which carries the glow material and you have all the glowing squareness you can take!

If the background in the texture is not black, then it will also start and glow. So keep it as dark as possible as it will ‘pop’ out later when you play with the glow parameter… I am sure you got the point.

And… it only shows in best render. Not much to see in preview render… Which in itself can be rather confusing!

lemonnado thanks for explaning
have another question
“Then assign that texture to an object which carries the glow material”
is there two seperate textures or just one and when you say assign it to object is that just switching between two textures or something else.

Hey thanks for the hints lemo, gonna try that. great pics everyone. My image is a bit biased as i know space only from videogames …about “sky Space stars” making by Malhikus the Black (aka MtB)

lemonnade thanks for explaning
have another question
“Then assign that texture to an object which carries the glow material”
is there two seperate textures or just one and when you say assign it to object is that just switching between two textures or something else.

Just have the texture set in the texture window and ‘glow’ as material. Even when you have a texture on your object, the material still takes care of the shading. So you will have different results with different materials but the same texture. Try it out. The only material displaying a texture without change is the flatshader material. Every other material has en influence on the display.
Cheers
Lemo

ok now to find my marbles glow texture and my PeterPan glow mat:D

one more
heehee bet you thought I was going to say one more question:lol:

Not a scene but my try at a ship. Zenterprise
background done in PS using Zapplink. 2 versions. I think I like the first. 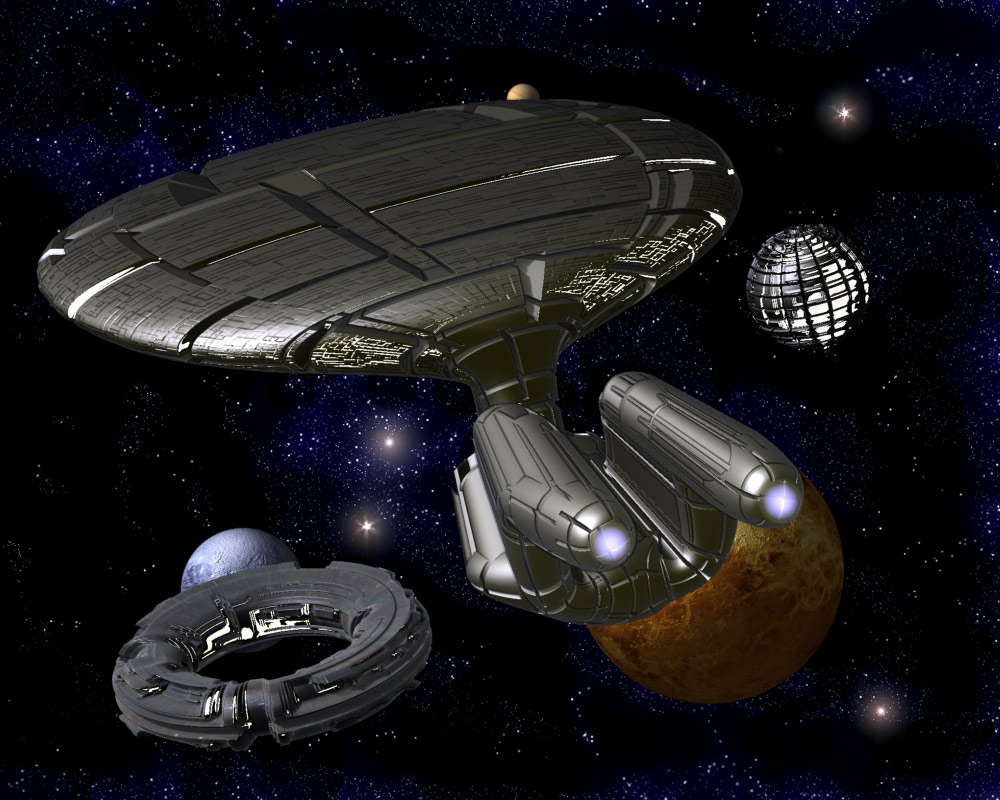 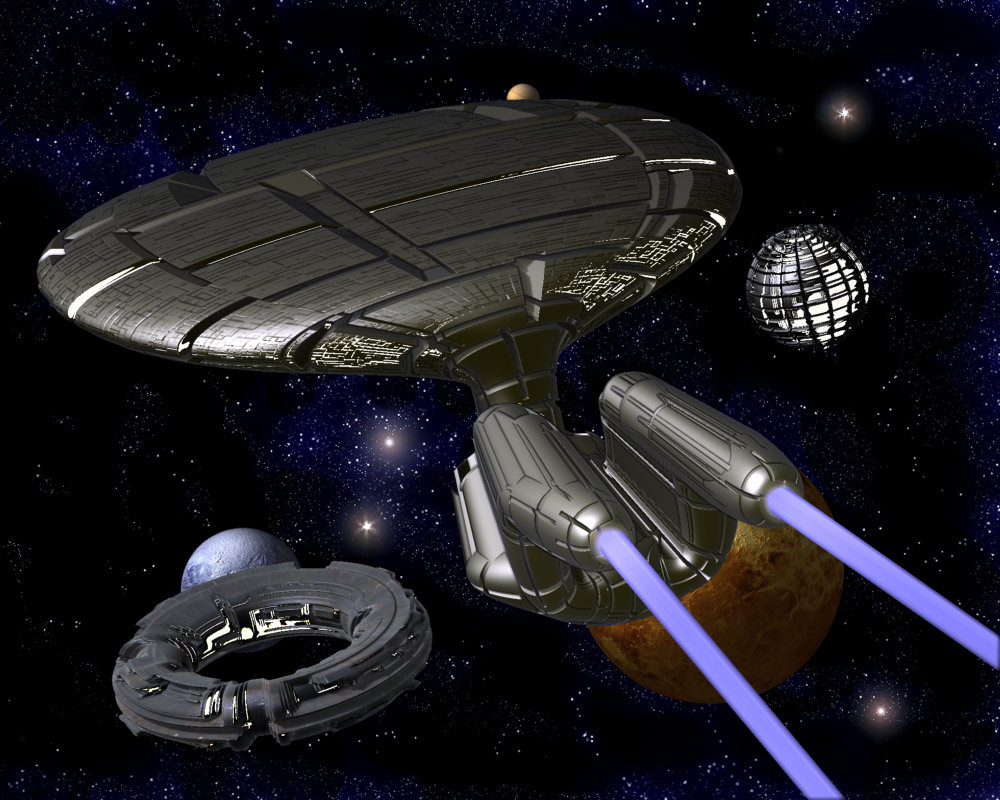