Artist in Action: The Venus from the Rhone River

This is a making-of article showing a reconstruction made by Pixologic French team member Thomas Roussel. The project was of a Venus head found deep in the Rhone River, in Arles, a city located in France and famous for its old Roman elements. Since the statue’s discovery, the Arles museum has performed much research into its original appearance, from the missing parts to the coloration. (Most people don’t realize this, but traditional Greek sculpture was actually painted!) Additionally, this project has been documented for a TV broadcast aired on a prime time TV show on French national television, showing elements of ZBrush to more than 3.6 million viewers!

Discover how ZBrush was used to work on the scan data of the head, rebuild the figure and finally paint it, in collaboration with the Arles museum and Eclectic Production / 2ASM.

Great read! thanks for sharing all of this with us; it was very interesting

That’s great, thank you for sharing!

I had a similar task lately, where I was asked to complete scan data. In my case the scan was missing the ears, back of the head, most of the hair and finally neck and shoulders. I was able to find the same workflow as Thomas here, which I find interesting after reading. ZBrush rocks. Thank you again aurick and Thomas. And to Ryan Kingsline for his kind advices… :-))

before my mom see that’s on tv ,he say what’s i do is bad!Now she feel happy:D
so big up polysculpt.com is best place for learn Zbrush

Now that’s a great way to use zbrush. Pixologic must be proud !

That was one of the most interesting articles i’ve seen, thanks so much for sharing the technique!

you go Thomas…
nice to see you working… hehe

Great article and nice to see some fresh work by Thomas. To finish, it’s great to see some work made in Zbrush for museum.

It is very splendid, having a traditional flavour for sculpture…

klausknuth: I would be glad to know more about your work

Kilik: Thanks! (see you next Wednesday for the workshop?)

Etcher: the 3D print has been delay, I should have in in July.

Tomas: yeah, I know, I don’t really show my work

But i have some 3D printing figure in progress

Maya4fun: as I said to Tomas above, I don’t post enough… I must find a way to create days of 48h and no more 24

Joseph: yes, I know and your work is really inspiring!

Nice try Thomas! As the staff at the Arles Museum must have probably pointed out to you this is the head of Roman vintage copy of the “Capitoline Venus”. This can be inferred with some certainty from the specific hairstyle. A high res image may be found here:

The process of restoring such a work is a demanding one. It requires extensive exposure to the specific master’s technique, in this instance Praxiteles. A set of reference images of the Louvre statue is indispensable. Alas, even the Louvre statue has a restored add-on nose…

klausknuth: I would be glad to know more about your work

Thanks Thomas, it was no big deal. It’s a quick and dirty tiny version of your work. No retopo and stuff. The Printer of the client, who asked me, is not able to print high detail anyway.

Thanks and have a nice evening 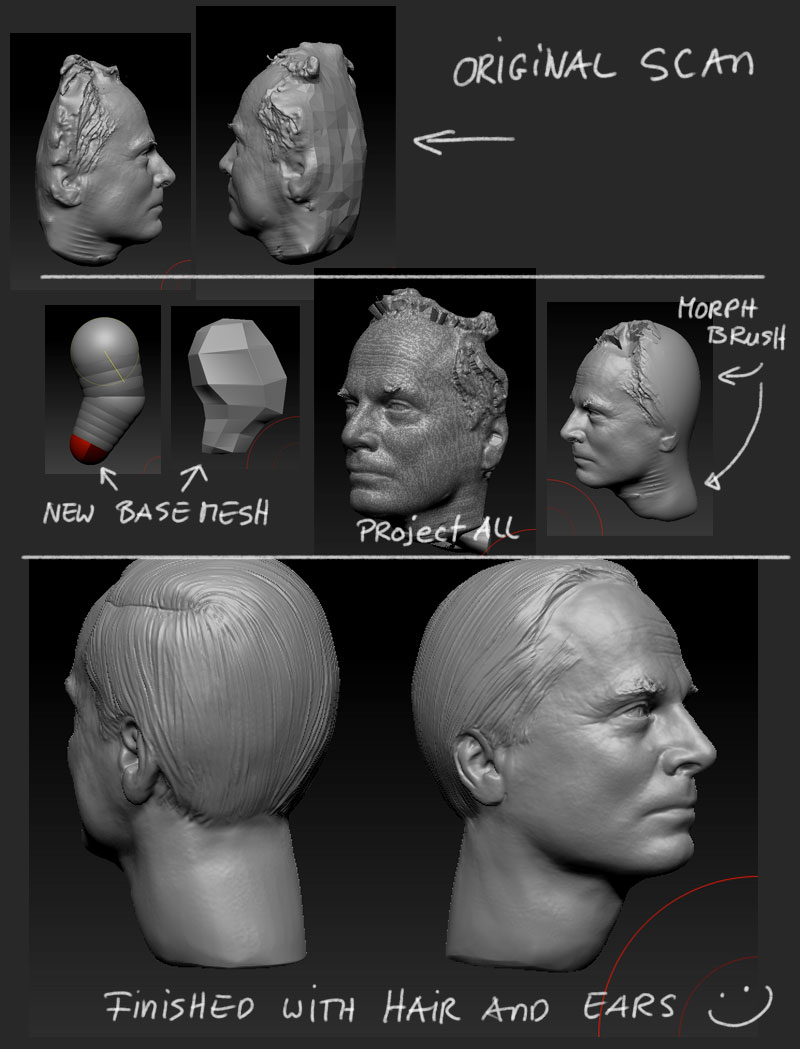 On another job with scan data I was thinking the same. But it did not work for me. The new created geometry was not placed on the original one; it was placed off on the other side. If there is a way I would really like to know!!!