very funny thing there. that smile.

I can’t decide whether he’s funny or terrifying!

You have some great work here. I’ve been looking back at it and for me, the Native american stands out. Beautifully done. Keep it up. :D

Thanks for the comments. I have no idea what I was trying for at the time, just having a bit of fun. I did add another little guy for the garden when I got back from my vacation. Had to use taron’s eye material for something once I saw it there. Fun to move the model around and watch the eyes follow you…

Oh and for that native american, that was one that I used a couple of reference pics on. I really should be using more references but that damn garden gremlin refused to stand still while I took his picture so I had to try and model him from memory.

Also made a new head to try and do some skin again. I’ve got to keep practicing, but I’ll get there eventually. Didn’t finish it, but I did get a few ideas for some new brushes I could make that might make it look a bit better. Still using the same one I made a while back that I used on the previous models, so that might be a part of why I’m not getting the desired effect.

nice job on that last guy

He seams very well portioned and more controlled that some of your previous sculpts. And i like his skin too, my only suggestion would be to add a few deeper more “speckled” pores on his nose, cheeks and under his chin (This is a great example). Sculptris’s speckles alpha is really good for that, and if you invert it it works great for adding “beard bumps” as well.

Thanks FiL. I was hoping to try to get the base model a bit better for that one. That is a great example to learn from though. He did an awesome job on that head. Going to be interesting to try and replicate that skin. It will take a little while to get to that level but that’s what this practice is for.

New little head today. Not going for any realism, just having some fun.

i agree Majid is an amazing artist, very inspirational stuff on this site, sometimes overbearing but it’s all in how you look at it.

Another test with the same model. Found a fairly close up picture of skin that I turned into an alpha brush to see if it would work better at reproducing skin. I like it a bit better than the last version so far. I also tried to add a bit of color to the face for this iteration.

And now a Stygimoloch head. Just the base model for now before I go to paint and bump.

There’s been some awesome sculpts since I was here last. Not much time to play around with the program lately so I “made” myself take some time tonight to have some more fun. I don’t think I’ll take it any further, but I love this material. This is all just the material with no paint.

Looked at him again this morning and just couldn’t leave him without arms and hands. How would he feed himself? (Ok, he can’t see without eyes or get around without legs and feet either, but oh well

) Bit more than doubled the triangle count to add the arms and hands in there.

Looking good Spork, what material are you using?
it has a great base color to it.

Thank you sculptrisnewb, I got it some time ago in the original Sculptris forums. Wish I knew who made it to begin with to give them credit. Saw it in my materials and thought I’d see how it looked on this one. Here’s the material if you want to try it out.

I really like your latest sculpt! His moobs are very enticing.

I hope you add his lower half at some point, I like the stance, and think he would look wonderful completed. And thanks for the great material, it has a nice latex quality to it.

Well, I did spend a bit more time with it. I was planning on waiting to post the progress but since I may not get back to it for another day or so I’ll post where it currently is.

Added in a bit of bone protrusions on the knuckles and elbow. Put in some eyes for him and also pushed in a bit of shape to about where I’m going with the legs.

As for the moobs dreamz, they are really fairly small for those of his clan. Using decorative and sacred nipple weights, the highest ranking and oldest of the clan have been known to walk very carefully for fear of tripping over their exceedingly long moobs. Until he achieves adulthood, which is a year long ritual, he cannot begin to wear the the revered weights that will signify his right to drink milk straight from the carton.

your characters are good how long is it taking you to make them. you seem to be doing them all in sculptris

Thanks for the skin tone material.

Thanks guys for the comments and motivation to keep going on with this one.

As for the time it takes on these tyree1, it can vary. For a head I may take about an hour or so but it may take 2-3 hours when I create a full character. Painting might add about another 30mins to an hour depending on how many times I change things around and experimenting…

. Though my current model has more than likely taken around 4 or so hours at least. Hard to really calculate since I tend to mess around with some of these while I watch tv. I’m getting a bit quicker with as much time as I’ve spent using Sculptris, but I think it would go a lot faster if I started with a drawn concept rather than just beginning with a sphere and letting the model create itself as I go.

Started with some detailing of the legs. Haven’t gotten to the toes just yet and I’ve got to finish with those before I can turn the symmetry off and get to the loin cloth to put some better curved folds to the cloth. 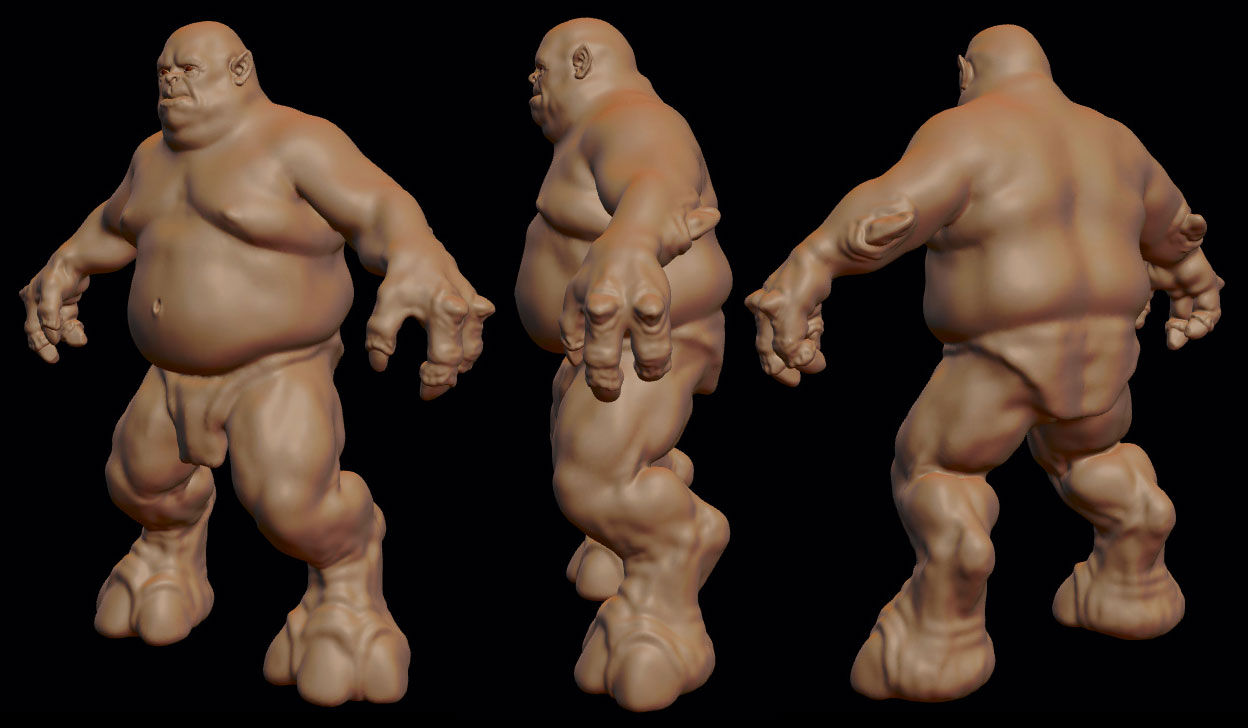 Added in some of the folds for the loincloth. Was hoping to try to get a bit of a leathery feel to it.